BENTONVILLE (KFSM) — A Libertarian Party candidate has suspended his campaign for a State House seat after allegations surfaced that he made derogatory comments... 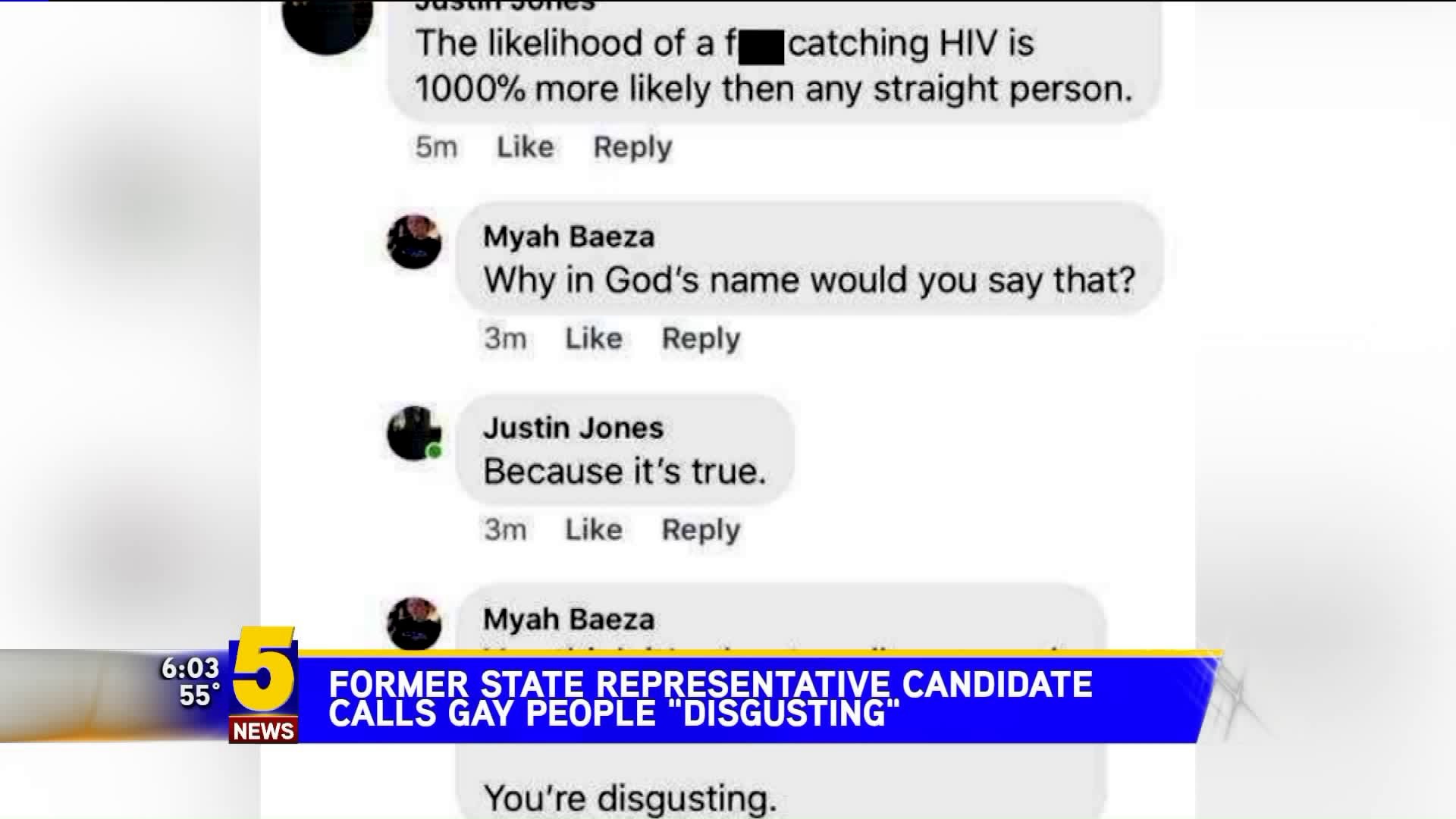 BENTONVILLE (KFSM) — A Libertarian Party candidate has suspended his campaign for a State House seat after allegations surfaced that he made derogatory comments about gay people and HIV.

During a Facebook conversation about blood donations, Justin Jones reportedly told a woman that homosexuals were "1000% more likely than any straight person" to contract HIV. He later called homosexuals "disgusting."

Jones was a candidate for District 87, which covers parts of Benton and Washington counties, including Siloam Springs, Elm Springs and Tontitown.

Jones said Tuesday (April 3) the comments were satire and taken out of context. His campaign released this statement to 5NEWS:

I recently made a comment that was meant to be satire, but had FACTUAL meaning. In the new day of Social Media, we face backlash for every comment we make, which is putting "Free Speech" at a price. The Aids Epidemic is a VERY big part of the LGBTQ Community. To not recognize that would be a "Lie" to yourself and the LGBTQ Community. In this New Day of politics, we are recognizing the benefits of throwing away the old establishment, and how that didn't work. Today, we are bringing back "FREEDOM OF SPEECH", and protecting our 2nd amendment rights. That might be too much for some people, but that's why we're getting them out of Public Office. Let's get back to "Making Arkansas Great Again". Vote Justin Jones for State Representative, District 87.

Jones declined an interview request. David New, Jones' campaign manager, said that Jones has "made his statement" and "has nothing more to say on this matter."

"If not, then you don't need to be a Libertarian, you're not representing us," Kalagais said.

"We believe that the rights of the individual are paramount — that each person has the right to make decisions for themselves about what activities to pursue, what to eat and drink, and who to love," said Pakko, noting that the Libertarian Party has supported marriage equality since its initial founding in 1971.

"Mr. Jones is within his rights to associate with gay individuals or not, and to have opinions of his own about morality, but the denigrating, insulting comments that have been attributed to him have no place in the political messaging of the Libertarian Party, and we disassociate ourselves from such offensive remarks."

Other candidates for District 87 include Republican incumbent Robin Lundstrum and Kelly Scott Unger, a Democrat. Both women condemned Jones' comments.

In a statement on her Facebook page, Unger said she was "horrified by the nature and content" of Jones' statements.

"I'm just so tired of us having statements like that constantly covering up the bigger issues that we should be talking about," Unger said.

"There's just no room for that in politics or in society to talk that hateful about any group of people."

Lundstrom said she was "mortified" by Jones, adding that "his language was derogatory and it shows a lack of discernment and respect of others."

"Mr. Jones' decision to leave the race was the right decision," Lundstrom said.