FORT SMITH (KFSM) —  Fort Smith Police were called to Central Mall by mall security to escort a couple from the premises on Saturday (Dec. 19). That coupl... 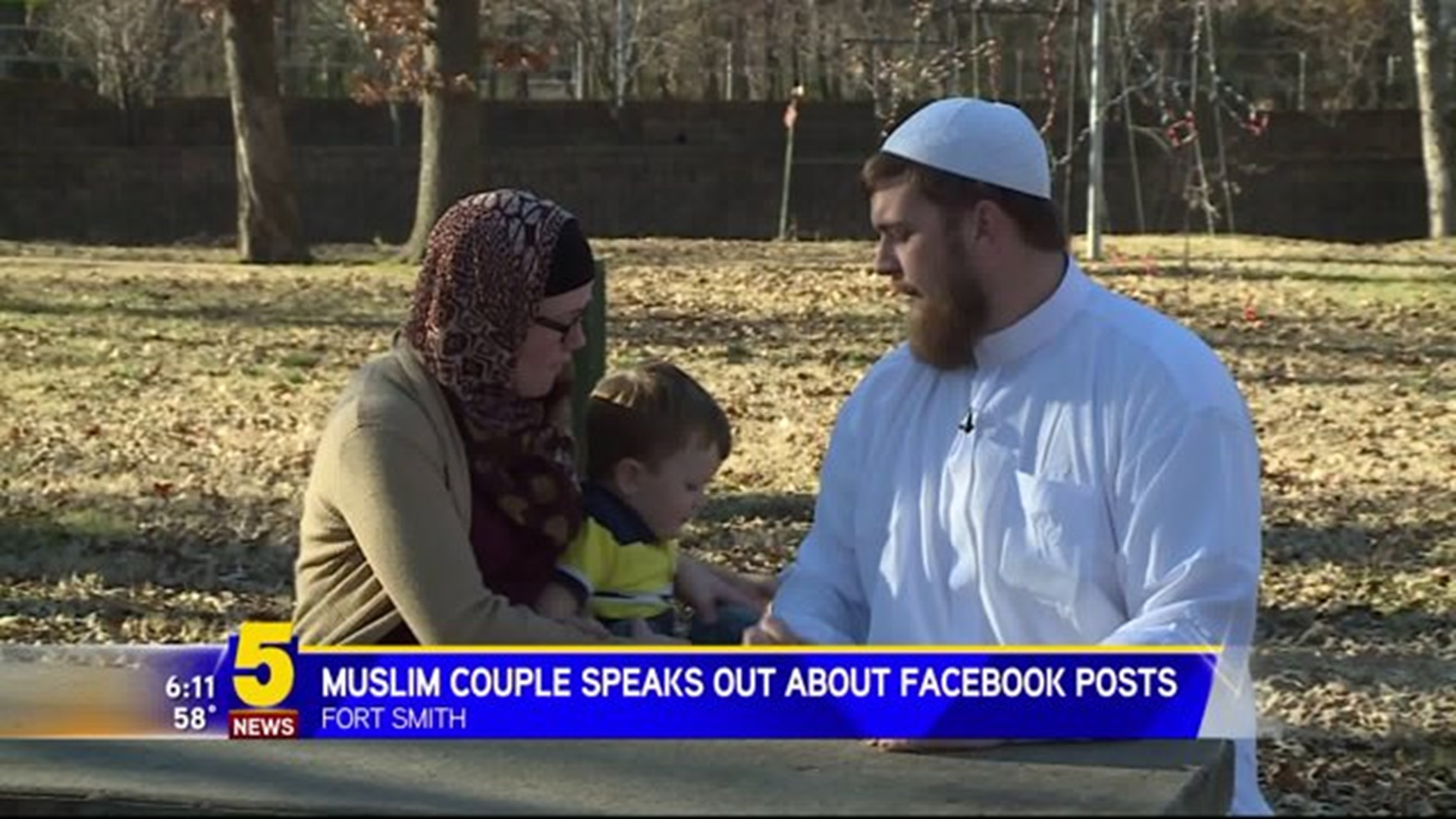 FORT SMITH (KFSM) --  Fort Smith Police were called to Central Mall by mall security to escort a couple from the premises on Saturday (Dec. 19).

That couple was Alan and Daphne Crawford, who were dressed in a thobe and a hijab.

According to the police report, officers were called because people  were concerned about the couple's action.

"I had two unknown subjects come up to me and advise me that a male subject wearing a thobe was video recording everyone in the mall and he was video-taping the entrances of several stores," stated officer Anthony Cox in the police report.

According to the report, mall security told Crawford he was not allowed to record video in the mall according to mall policy.

People who were in the mall took pictures as Crawford, his wife and son were escorted from the property. Those pictures, along with several other posts about the incident, were shared on Facebook more than 2,000 times. The posts are worded with phrases like "terrorist threat on the mall" and "Muslims have been scoping the layout of the mall." Police have not confirmed any threats and the Crawfords are speaking out about what people are saying about them. Alan Crawford said a Fort Smith police officer approached him and asked for his drivers license.

"He informed me that he needed me to lift up my thobe in order to obtain my ID. What crime I committed, I don't know," he said. "I wasn't aware that police officers show up five at a time to enforce mall law. If you want me to leave, I will leave happily."

Crawford said he was at the mall to hand out cards for a local charity and to shop with his wife. He said he did not see a sign posted on the mall entrance about recording video not being allowed.

"We purchased about $200 worth of Sperry shoes, which I'd be happy to show everybody. There's nothing better than Sperrys. These things last about two to three years a piece and some beautiful Armani glasses from Lens Crafters. And these are the crimes we committed at the mall this weekend," Crawford said.

When asked if he ever recorded video inside of the mall Crawford said he only recorded audio.

"I audio recorded the police officer and held my camera in the manner that would lead him to believe that I did video tape while he screamed at me and told me that 'I can confiscate your phone'. You can't confiscate my phone for mall law. I violated mall law, OK? Which wasn't even clearly posted," he said.

Crawford said he has a message for people who have posted about he and his wife on Facebook and others in the community that have seen them out.

Alan and Daphne Crawford are also the couple in a flyer that has been circulating on Facebook. The flyer has a picture of the couple in their head dress, and asks people to call police if they are seen out. It's a flyer that Crawford said has caused his family a lot of grief. The flyer was circulating around town during the time that Master Sgt. Josh Wheeler's memorial service was held in Muldrow.

"It broke my heart. It absolutely destroyed me. I was in the infantry. The infantry is a brotherhood. The infantry is a bond that is unbreakable. Death before dishonor. We'll never lose each other. We will never leave each other," Crawford said. "That's how our country rolls. I couldn't even go to my own brothers funeral. If i had I would have been treated like a terrorist. This shouldn't be happening in America."

Crawford said after the flyer and allegations on Facebook, he plans to move his family away from the area. The Crawfords also said they have had people plant small bombs in their yard.

"It's sad really. Anyone can come up to us and ask us anything they want to ask us. We stopped and spoke with a couple in the mall and they ended up sticking up with us later  on Facebook saying that they had met us and we were a Muslim family trying to do holiday shopping. It's kind of scary," said Daphne Crawford.