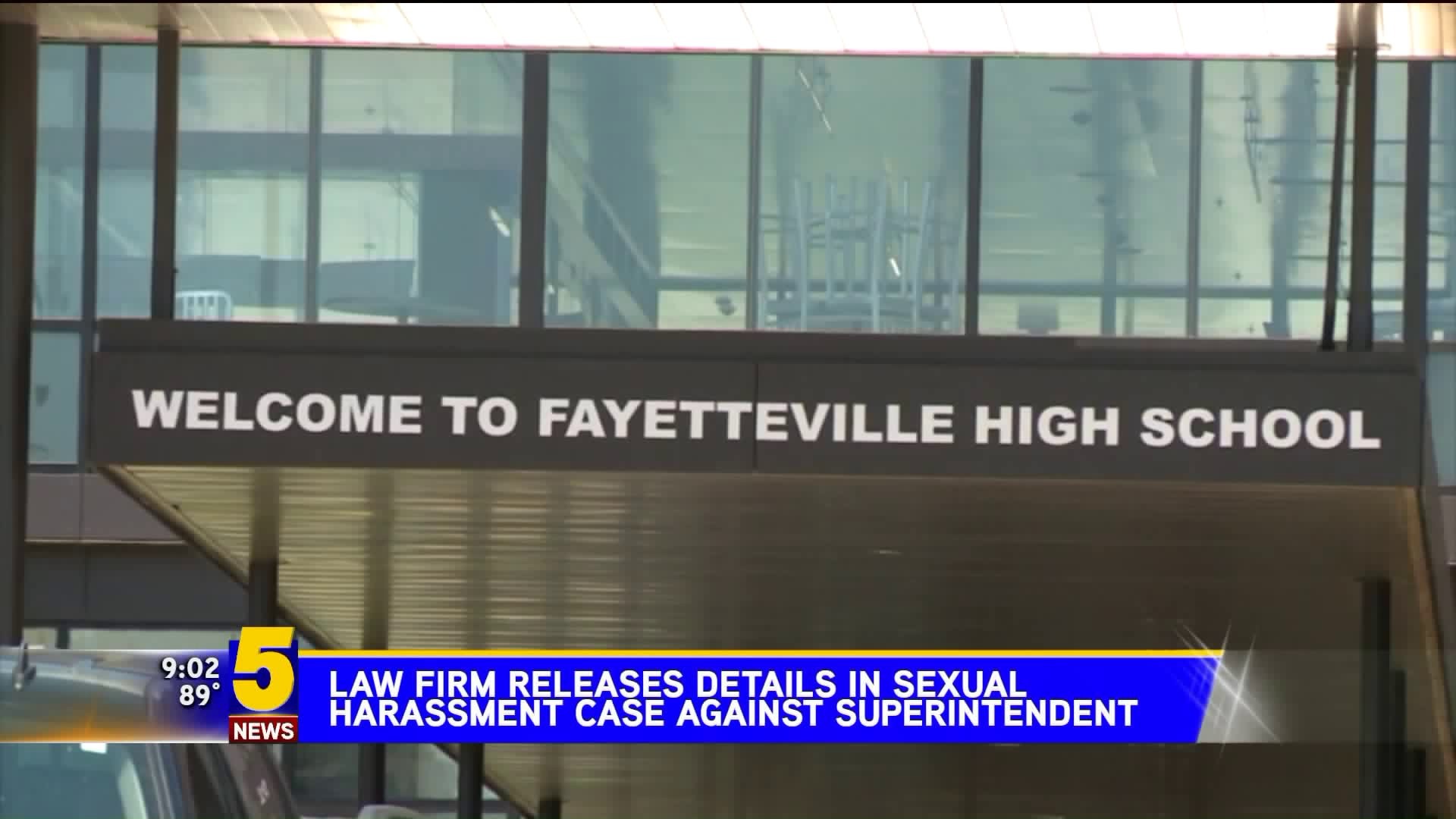 FAYETTEVILLE (KFSM) -- The law firm representing the woman who filed a complaint against Fayetteville School District Superintendent Matthew Wendt released the complaint in a news release on Thursday (June 14).

A  charge of sexual harassment with the Equal Employment Opportunity Commission (EEOC) was filed on May 25 against the District and the Board based on Wendt's conduct, according to the press release.

The complaint was released along with a scathing letter from attorney Suzanne G. Clark of the Clark Law Firm calling out the school board for its inaction on the complaint.

"After almost three months since my client's complaint was reported, the Fayetteville School Board ("Board") will be hearing Matt Wendt in a public meeting," the letter from Clark begins. "The fact that this process has taken so long, and the fact that the Board's concerns for Wendt's rights have consistently been given more weight than my client's rights, is beyond disappointing. It is a lapse in leadership."

The Fayetteville School Board has said it will hold a special meeting for a public hearing on "a personnel matter" at 5 p.m. Monday (June 18) in the Adams Leadership Center on West Bulldog Boulevard. The announcement did not specify whether the personnel matter involved Wendt.

According to the complaint, the woman, who was an employee of the Fayetteville School District in 2011 then returned in 2014, said her "problems with Superintendent Matthew Wendt began September 30, 2017, with an invitation from him to meet a group of employees after a Saturday employee retreat." The woman said they met at a cigar bar that "appeared to become kind of private club." She said despite being told others were coming, no one else showed up. While sitting a the bar, she said, Wendt "pulled my face around and kissed me."

"I didn't know what to say but thought 'what just happened?' " the woman said in her complaint.

She proceeded to detail the numerous texts she allegedly received from Wendt and the requests to meet him at a hotel. She said they eventually met, had drinks and had sex in October. The woman called the encounter "the biggest mistake I've ever made."

The complaint states that Wendt immediately demanded a relationship with her and talked of them leaving their spouses, which she refused. She said he would text her frequently throughout each day.

"If I didn't respond, he would leave a meeting to ask me why I was not responding," she said in the complaint. "He always wanted to know where I was and who I was with."

The woman said Wendt then started driving by her house. She said at one point, her sister confronted Wendt outside the woman's home, then they walked to the park to call the police. But the woman said she was afraid of what would happen if she reported him, so she didn't.

She said Wendt would complain about her being out with her husband and would send photos from her Facebook page with complaints that she was dressing too provocatively. He would insist she meet him at the press box during football games, the woman said, and would berate her later if she didn't or would come looking for her.

The woman said she attempted to get Wendt to leave her alone in November, but he continued to drive by her house, call her or text her.

"He texted a picture of my house to me on November 12th to let me know he was outside watching me," she said in her complaint.  She said she started seeing a counselor to deal with the stress, and she began emailing his texts to herself to save because, "I knew that no one would take my word over his if this ever came out."

She said every time she tried to break off the relationship, he would insist on meeting to discuss it in person.

"He would wear me out until I agreed to meet and then he would pressure me for sex," she said. "He would always bring alcohol because I couldn't be with him without it."

She said Wendt insisted she travel with him first to a football game in Little Rock overnight, then to New York.

The woman said Wendt promised her a job transfer in January, when she believed she would be able to break away from him. Then he told her the transfer would be delayed, "until he got rid of the 'crazy principal' because she would ask too many questions,' " the woman said.

The woman said she repeatedly tried to break from him in December and January, but that he would become angry, would send repeated texts and would berate her.

"I kept refusing and he was very angry," the complaint said. "He said extremely crude things about me and the fact that I had had sex with him. He would get really scary."

The complaint alleges that Wendt told the woman it was OK if she didn't want to have sex with him because he said "he had lots of women [who] wanted him including the women who come to his office."

"He said he could have sex with the school board members and talked about one board member in particular," the complaint said.

The woman said Wendt threatened to tell her husband about their relationship, and his behavior "got more aggressive the last couple of months and I got more scared." She said she began recording their conversations when he would come to her desk.

"Within a couple of weeks it was the same situation and cycle all over again," she said.

According to the complaint, on March 9 Wendt had the woman come to his office. When she tried to leave the office, he "grabbed my arms and pushed me away from the door."

"He stood in front of the door saying don't you love me? Say that you love me," the woman said. "I said yes, so that he would let me go."

"I knew if I came forward and told anyone, I was placing my job and my husband's job at risk, my reputation could be ruined and I would be exposing our children to this," the woman said. "I was afraid everyone would want to protect Dr. Wendt and that people would say I asked for it or deserved it. I finally decided I didn't have any other choice."

The Fayetteville School Board was contacted and Fayetteville Public Schools released the following statement:

“The Fayetteville Board of Education and Fayetteville Public Schools will have no comment on the news release sent to the media earlier today by Ms. Suzanne Clark. Discussing ongoing personnel matters would not be in the best interest of protecting the rights of all involved.

“The school board and the district are committed to following the prescribe due process laws of the United States and Arkansas Constitutions, as well as the Arkansas Freedom of Information Act.”