LITTLE ROCK, Ark. (AP) — A federal judge blocked three new abortion restrictions in Arkansas minutes before they were set to take effect Wednesday, including a ... 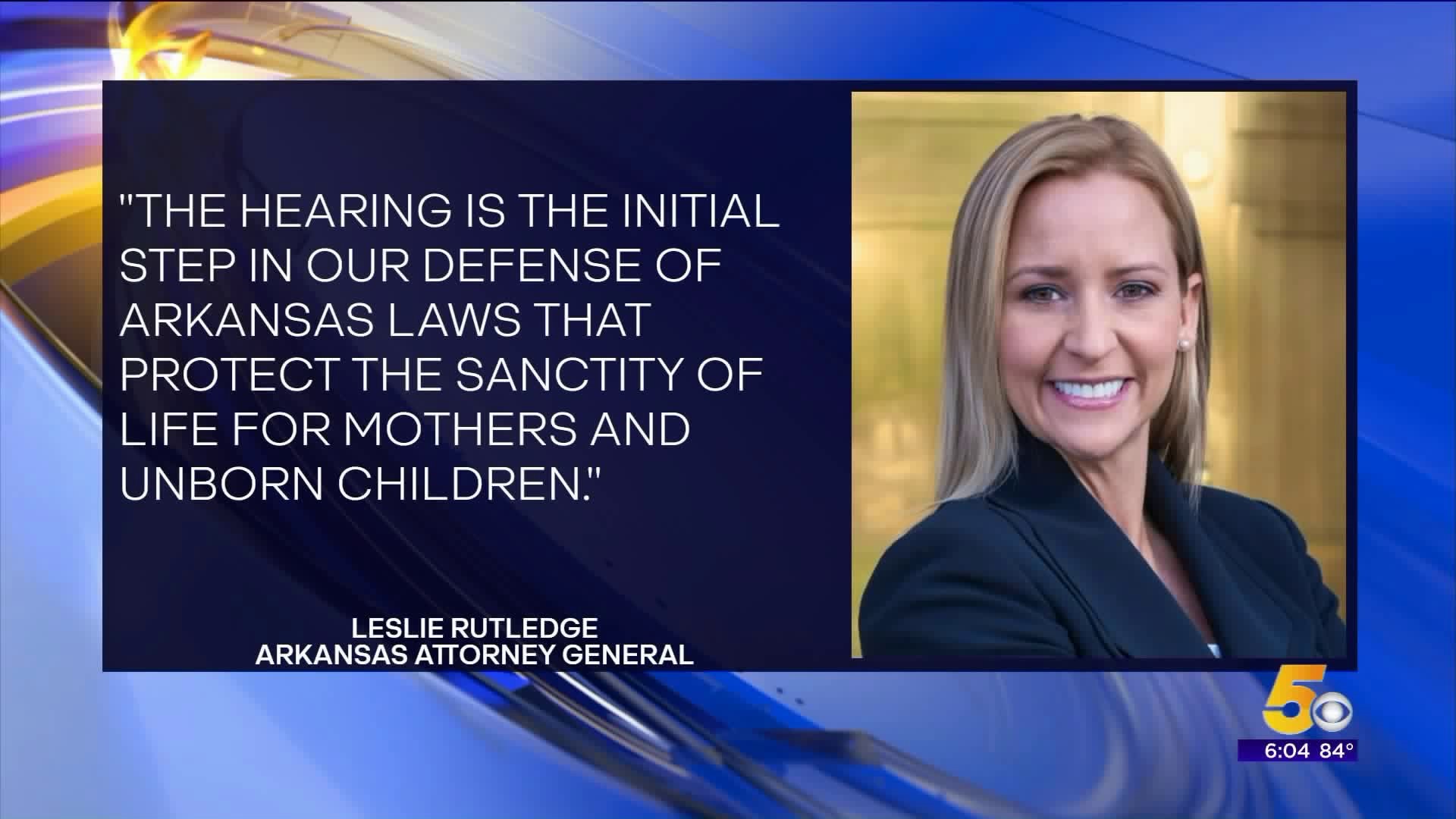 LITTLE ROCK, Ark. (AP) — A federal judge blocked three new abortion restrictions in Arkansas minutes before they were set to take effect Wednesday, including a measure that opponents say would likely force the state's only surgical abortion clinic to close.

U.S. District Judge Kristine Baker granted a 14-day temporary restraining order shortly before midnight Tuesday. The 159-page ruling blocks the state from enforcing the new laws, including a measure prohibiting the procedure 18 weeks into pregnancy. The blocked laws also included a requirement that doctors performing abortions be board-certified or board-eligible in obstetrics and gynecology. An official with a Little Rock clinic that performs surgical abortions says it has one physician who meets that requirement, but he only works there a few days every other month.

Baker found that if that surgical clinic closed, about 1,800 women a year — or 66% of those seeking to terminate a pregnancy in Arkansas — would be denied an abortion, based on evidence introduced into the court record.

She also wrote that the restriction "provides no discernable medical benefit" to women and questioned lawmakers' intent in passing the law, known as Act 700.

"This, coupled with the record evidence that Arkansas has enacted more than 25 laws regulating abortion access in the state, including 12 enacted in 2019 alone, gives the court pause with respect to the purpose of Act 700," she wrote.

The Arkansas bans are among a number of sweeping abortion restrictions enacted in Southern and Midwestern states . Republican lawmakers in those states are emboldened by the prospect of the U.S. Supreme Court revisiting its 1973 Roe v. Wade decision that legalized abortion nationwide. The restrictions include an Alabama law that would make performing an abortion a felony in most cases. That law doesn't take effect until November and is being challenged by abortion providers.

Baker also blocked a law prohibiting doctors from performing an abortion if it's being sought because the fetus has Down syndrome. For that law and the 18-week abortion ban, Baker found that both would unconstitutionally restrict abortion before the point of viability, or the likelihood that a fetus could survive outside the womb.

She wrote that the Down syndrome abortion restriction "is an absolute prohibition on certain abortions prior to viability which the Supreme Court has clearly held cannot be imposed by the state."

The laws are being challenged by Planned Parenthood and Little Rock Family Planning Services, the state's only surgical abortion clinic. Planned Parenthood only offers medication-induced abortions in Arkansas and earlier this month stopped providing abortions at its Fayetteville facility while it looks for a new location. It continues to provide the procedure at its Little Rock center.

"We are so relieved that these bans and restrictions have been temporarily blocked from taking effect. And we are determined to see them blocked for good," Dickson said.

Baker's ruling is in effect for 14 days, the maximum amount of time a temporary restraining order may be issued, though she could extend it another 14 days or issue an injunction blocking the restrictions while the lawsuit is considered.

Arkansas Attorney General Leslie Rutledge, who has appealed Baker's rulings in the past, said Wednesday that the legal challenge is "frustrating, but not unforeseen."

"The action was only the initial step and I anticipate further action in the near future in our defense of these laws that protect the life of mothers and their unborn children," Rutledge said.

Under current law, a physician licensed to practice medicine in Arkansas can perform abortions. The additional qualification for doctors performing abortions to be board-certified or eligible is similar to a Mississippi law that a federal judge upheld last year . Opponents say the requirement would prevent a large number of physicians from performing the procedure. The state says it would protect patients, but Baker rejected that argument.

"Record evidence supports that legal abortion is significantly safer for a woman than carrying a pregnancy to term and giving birth," she wrote.

Attorneys defending the law "have come forward with no reliable, generally accepted medical or scientific record evidence to refute this," Baker said.

Little Rock Family Planning has said it has only one physician who meets that requirement, but he lives in California and only works at the clinic three to four days every other month. An official with the facility said Monday it could close within a month if the requirement was enforced.

Arkansas is one of two states with an 18-week ban. Utah enacted a similar restriction this year , but has agreed to not enforce it while it's being challenged in federal court.

Several states have laws banning abortion for genetic anomalies including Down syndrome, but North Dakota's is the only one in effect. The others are tied up in legal challenges.

It was the second time in recent years that Baker has blocked Arkansas abortion restrictions moments before they were to take effect. In 2017, she blocked the state from enforcing four lawsincluding a ban on a second trimester decision. A federal appeals court is considering the state's bid to allow those laws to be enforced.

Arkansas faced the prospect of losing its only surgical provider while neighboring Missouri's only abortion clinic is fighting to continue providing the service . If that facility closes, Missouri would be the first state without an abortion clinic since the year after the Roe v. Wade decision.

The laws are among several new restrictions approved by the majority-Republican Legislature in Arkansas this year. Another law not challenged that took effect Wednesday increases the waiting period before a woman can get an abortion from 48 hours to 72 hours. Lawmakers also approved a measure that would ban abortion in the state if Roe v. Wade was overturned.