Gun-rights advocates from across Northwest Arkansas and the River Valley gathered in Fort Smith Saturday to show their support for the Second Amendment and thei... 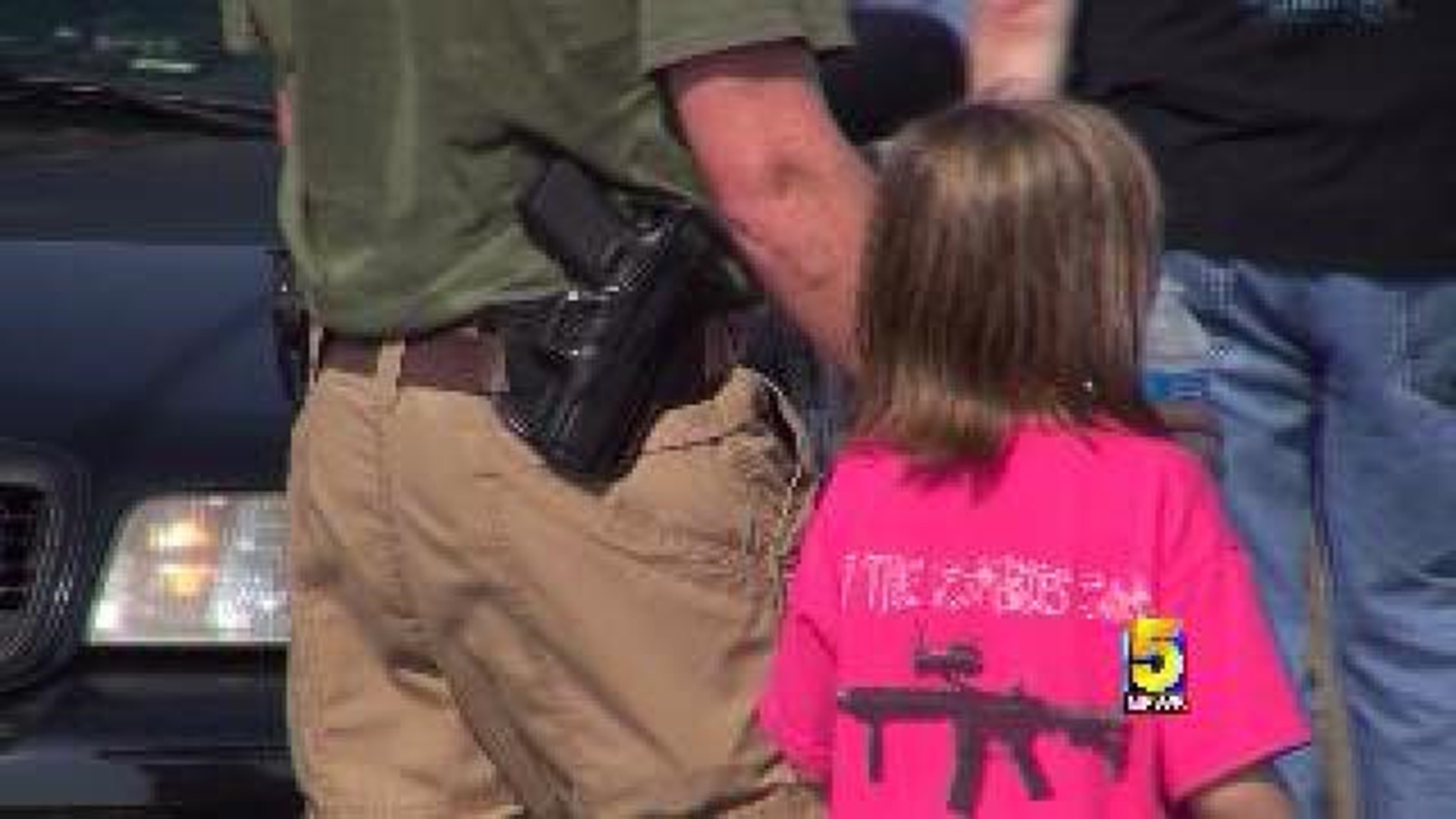 Gun-rights advocates from across Northwest Arkansas and the River Valley gathered in Fort Smith Saturday (Aug. 24) to show their support for the Second Amendment and their interpretation of a gun law that recently went into effect.

About 40 open-carry supporters gathered near the intersection of Zero Street and Massard Road to march one mile. Steve Jones, chairman of the gun-rights organization Arkansas Carry, said the event was not a protest but a "celebration."

"We're walking in celebration of Act 746 passing last Friday (Aug. 16) which we believe actually allows us to carry handguns in the open or concealed without a license," said Jones.

Arkansas Attorney General Dustin McDaniel issued an opinion saying Act 746, which was approved this year, does not give people the right to openly carry when they journey out of their home county. Carrying a concealed weapon with a permit is legal, but the McDaniel said open carry is still illegal.

"(McDaniel) said Act 746 does not authorize open carry," Jones said. "Well, just to put it plainly and simply, Act 746 doesn't authorize drinking tea on the porch in the middle of the day either. Dustin McDaniel, he’s playing word games with everyone.”

Jones said he reached out to Fort Smith Prosecuting Attorney John Settle and Police Chief Kevin Lindsey about their plans to march while openly carrying guns.

”We agree that (those openly carrying) are not breaking the law," Jones said. "The reason I contacted them was to make sure that we were on the same page."

Participants in the march believe it's important to protect their rights.

"Open carry, to me, is not so much about me being able to display my weapon and show this force and this machismo," said Neil White from Fort Smith. "It's about protecting my rights underneath the Second Amendment that shall not be infringed."

"I hope I never have to use it, but in the event that I would, it's there," he said. "It's easy to get to, and it might deter crime.

The event drew interest from people in the area who came out to see the march. Spectators had mixed opinions about the idea of gun owners openly carrying in Arkansas.

"I read the law and it seemed pretty clear to me that, yeah, it's open carry, whether it's a rifle or handgun, you have the right to just have it displayed," said Delores Colbert of Fort Smith.

Colbert believes open carry deters crime, but she worries about children having easy access to guns.

”When you have (a gun) exposed, you’re just inviting trouble," said Nick Johnson from Van Buren. ”If the Attorney General does say that it’s not right, then it’s not right."

Many law enforcement officials and politicians spoke out after the McDaniel's opinion was released.

State Representative Sue Scott (R-Rogers), an advocate of open carry, said she also does not interpret the new law to mean gun owners may carry their firearms openly.