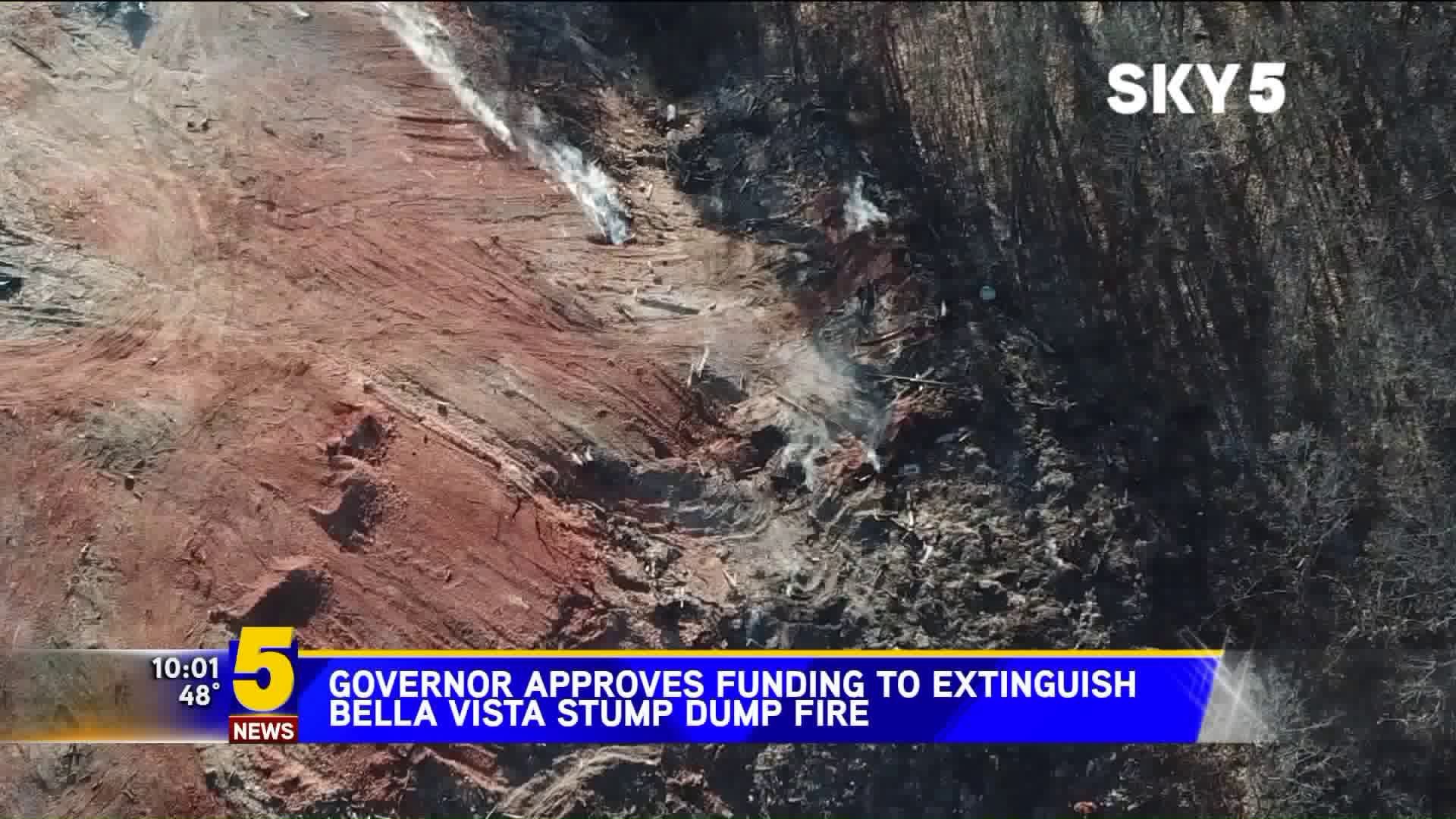 Hutchinson said he directed the Arkansas Department of Environmental Quality (ADEQ) to contract with an engineering firm to prepare a plan for removing or eliminating the fire.

"This is an expansive project, and I have approved necessary funds for the engineering work," Hutchinson said.

"Additional funds and expertise will be needed to eliminate the hazard."

It wasn't immediately clear where the funding would come from and how much would be necessary for the project.

Hutchinson said he's committed to finding a quick and safe solution. He added that he expects to tour the site in person in the next few days.

A fire has been smoldering deep underground at the site since July, and the Bella Vista Fire Department has said there’s no safe way to put it out.

Earlier this month, health officials declared the air round the property 'unhealthy' and urged residents to avoid prolonged exposure to the area.

Brown's Tree Care owns the property, which is catercorner to Trafalgar and Kingsland roads.

Residents voiced their frustration over the fire en masse at a City Council meeting on Monday (Dec. 17).

Stacey Lewis, who lives less than a thousand feet from the edge of the fire, said the smoke has gotten worse as it's gotten colder.

"It's a living nightmare. You see it coming from the ravine from our house, and it's just anxiety," Lewis said.

"You know it's coming for you and you know it's going to be there, you're just not sure when," Stacey Lewis said.

Following a round of particulate matter monitoring by the U.S. Environmental Protection Agency, the site and Sutherland Lane each received an "unhealthy" designation, according to the Air Quality Index (AQI), which uses a range of zero to 500 to monitor particle pollution in the air.

The AQI noted a "moderate" health concern for parts of Mary Ann and Webb lanes.

Areas with moderate health concerns still have acceptable air quality but could be harmful to people with respiratory issues, according to the AQI.

Particle pollution consists of a mixture of solids and liquid droplets, according to the EPA.  Some particles are emitted directly; others form when pollutants emitted by various sources react in the atmosphere.

The site and Sutherland Lane were valued at 167 and 154, respectively, in the AQI index. Mary Ann Lane tallied an 84 while Webb Lane measured at 76.

A widely used industrial chemical, benzene was found at 30 parts per billion (ppb) within the boundaries of the former stump dump.

Benzene can cause serious health effects if “a person is exposed to it either in high doses (a lot of it) or over a long amount of time,” according to ADH.

The Occupational Safety and Health Administration (OSHA) has set exposure limits of 1000 ppb for eight-hour shifts during 40-hour work weeks.

State and local officials are monitoring the site and have asked residents to stay away. The city of Bella Vista has set up a website to track the progress of the fire.

In November, a Bella Vista family sued Brown’s Tree Care for lost wages, accusing them of creating a public health hazard after they allegedly failed to extinguish a burning brush pile on the property.

The stump dump was leased by the Bella Vista Property Owners Association from 2008 to 2016.

It was used as a collection area for residents’ stumps, brush, and leaves. The POA closed the stump dump down in 2016 after it reached capacity.

The Arkansas Department of Environmental Quality also ordered the POA to close another stump dump on the west side of town earlier this year.