LITTLE ROCK (AP) — A former pathologist denied he was impaired on duty amid an Arkansas Veterans Affairs hospital’s investigation into more than 30,000 of his c... 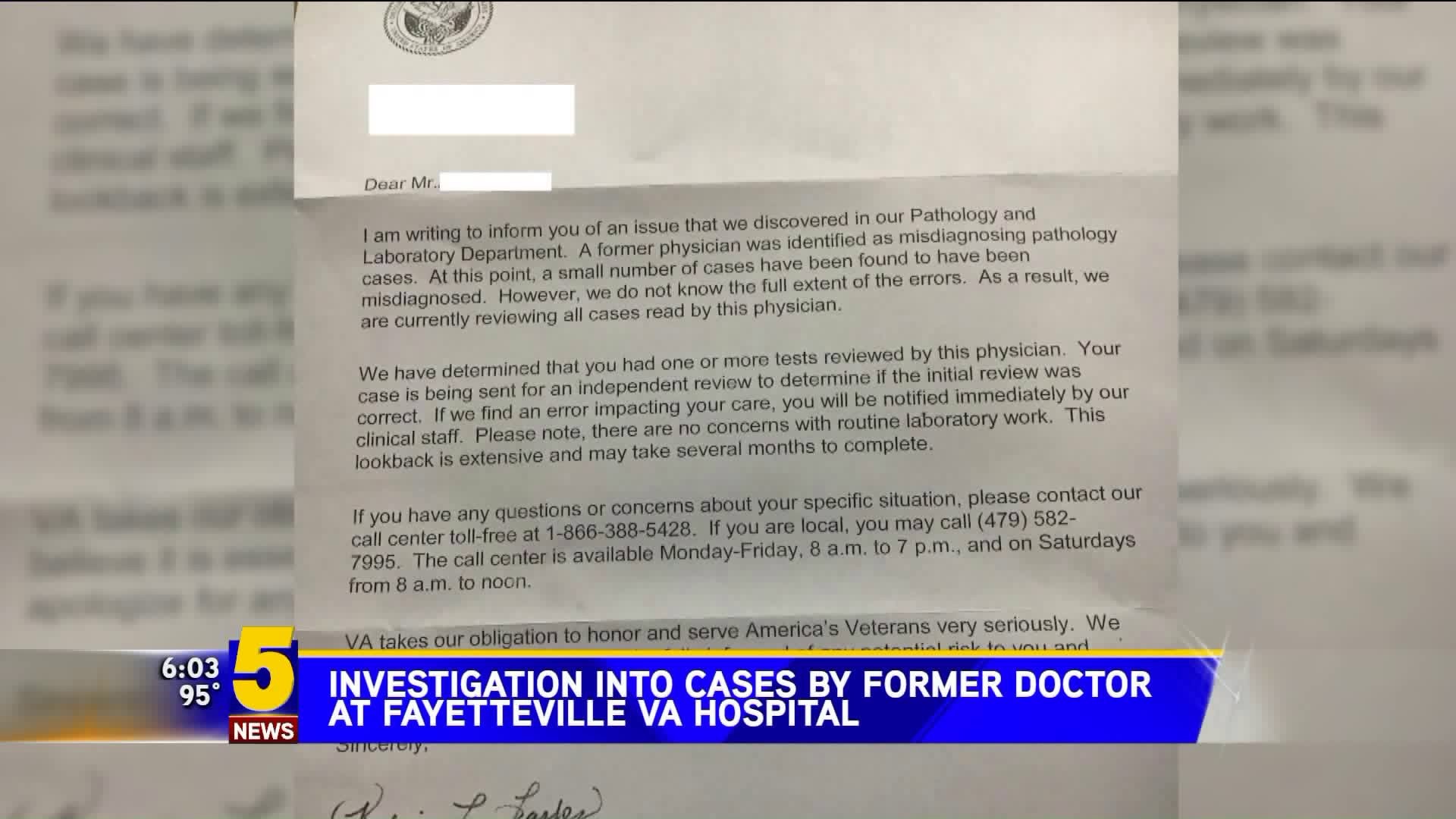 LITTLE ROCK (AP) — A former pathologist denied he was impaired on duty amid an Arkansas Veterans Affairs hospital’s investigation into more than 30,000 of his cases dating back to 2005.

Dr. Robert Morris Levy of Fayetteville told the Associated Press that the Veterans Health Care System of the Ozarks fired him as Chief of Pathology because of a DUI which was ultimately dismissed.

Levy said he was arrested during work hours on March 1 for driving under the influence.

According to a police report, Levy failed a field sobriety test. But Jacob DeYoung, a deputy city prosecutor for Fayetteville, said the case was dismissed after Levy’s blood sample was clean.

Officers noted Levy was swaying when he walked and had slurred speech. Officers were unable to obtain a breath sample due to an indication of "interfering substance" despite three attempts, according to the report.

An officer at the Washington County Detention Center later said Levy seemed to be intoxicated with CNS depressants, which include sedatives like Valium and Xanax.

The hospital has said Levy was twice found to be impaired on duty and consequently terminated him in April.

In March 2016, an employee reported Levy for being impaired, which Levy contends was the only time he showed up drunk to work. He was immediately removed from clinical care and, in July 2016, Levy entered an in-patient treatment facility.

He was cleared to work following treatment and was monitored by the Mississippi Physician Health Program in conjunction with the Arkansas Medical Foundation.

Levy was not registered in Arkansas, but VA physicians do not need to be licensed in the state of the hospital, said hospital spokesperson Wanda Shull.

In October 2017, Levy was again determined to be impaired on duty and was removed from clinical care while the hospital investigated. Levy attributed this to a complex migraine, which he said limited his ability to find words and hear properly.

Still, Levy continued to work as the hospital investigated. He said he saw a neurologist, who cleared him. Records also show Levy later visited a neuropsychologist who found “no major concerns.”

Levy’s DUI arrest occurred on March 1. The arresting officer noted Levy’s “speech was very slurred and his balance was swayed.”

The Fayetteville District Court said the case was dismissed on March 30 after blood samples were negative. Levy was ultimately fired April 13.

He said he doesn’t know what hospital investigations occurred between March 1 and April 13.

Kelvin Parks, the interim medical center director for the hospital, wrote to the Mississippi board on June 7 that Levy “significantly failed to meet generally-accepted standards of clinical practice that constituted an imminent threat to patient welfare.”

Two days later, the Arkansas physician program revoked its advocacy of Levy due to “non-compliance with daily check-in requirements and failure to return phone calls to the AMF.”

The Mississippi program notified the license board on June 20 that it too would cease advocacy for Levy, and Mississippi revoked his license the following day. Levy’s licenses in California and Florida are still active.

At a town hall Monday morning, Parks told a crowd of veterans that 3,000 cases have now been reviewed, but did not provide an update on the number of missed diagnoses.

The hospital previously said that out of 911 cases, they had found 7 missed diagnoses and one possible death.

Veterans and their family members asked questions about their personal health concerns after receiving a letter that they were one of about 19,800 veterans whose cases were now being reviewed.

Parks said the hospital intends to have the review completed within six months, “barring no unforeseen circumstances.”

The review is being conducted by a combination of VA and private doctors. The VA Office of Inspector General is also conducting an investigation to determine whether the hospital acted properly throughout the case.