China Retaliates On Tariffs, Stock Markets Go Into A Slide 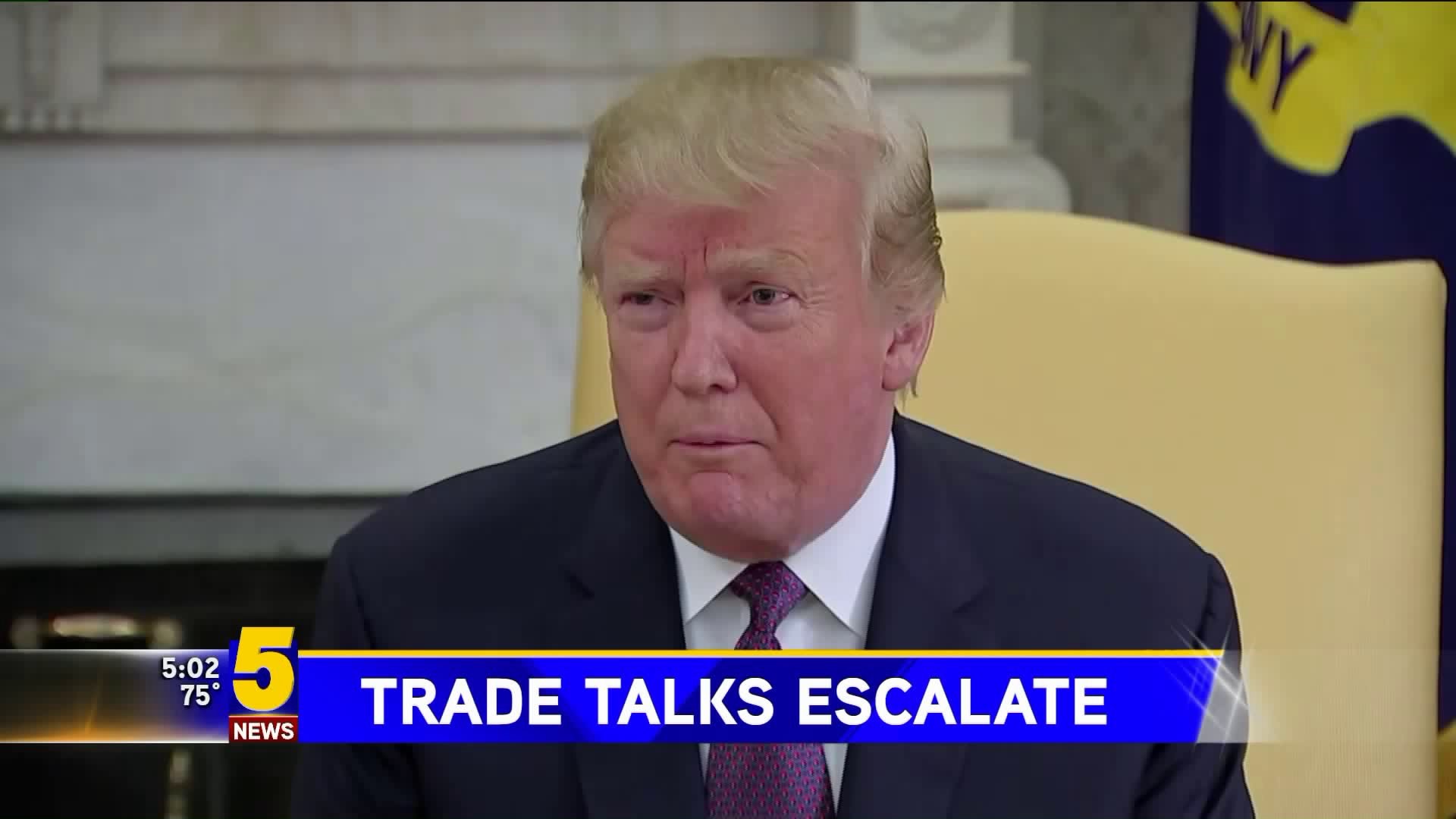 BEIJING (AP) — Deepening its trade war with the U.S. and sending world financial markets into a slide, China announced higher tariffs Monday on $60 billion worth of American goods in retaliation for President Donald Trump's latest penalties on Chinese products.

Tariffs of 5% to 25% will take effect on June 1 on about 5,200 American products, including batteries, spinach and coffee, the Finance Ministry said.

The announcement followed a move by the U.S. on Friday to raise duties on $200 billion of Chinese imports to 25%, up from 10%. American officials accused China of backtracking on commitments it made in earlier negotiations.

With investors unnerved by the potential for economic damage on all sides, stocks sank across the globe. The Dow Jones industrial average was down more than 600 points, or close to 2.5%, in midafternoon trading, while the Standard & Poor's 500 also sank nearly 2.5%. Earlier, stocks fell in Europe and Asia.

Two days of trade negotiations between U.S. and Chinese representatives broke up Friday without any agreement. Both countries have indicated more talks are likely.

Top White House economic adviser Larry Kudlow said on Sunday that China has invited U.S. Trade Representative Robert Lighthizer and Treasury Secretary Steven Mnuchin to Beijing. But nothing has been scheduled. Kudlow also said that Trump and Chinese President Xi Jinping may meet in late June at the G-20 summit in Japan.

The two countries have given themselves some breathing room: The higher Chinese tariffs don't kick in for 2½ weeks. The U.S. increases apply to Chinese goods shipped since Friday, and those shipments will take about three weeks to arrive at U.S. seaports and become subject to the higher charges.

On Twitter, Trump warned Xi that China "will be hurt very badly" if it doesn't agree to a trade deal. Trump tweeted that Beijing "had a great deal, almost completed, & you backed out!"

The president has repeatedly insisted, most recently on Monday morning, that increased tariffs on Chinese goods don't hurt American consumers. But Kudlow, head of the president's National Economic Council, acknowledged over the weekend that U.S. consumers and businesses will bear some of the costs.

"Both sides will pay," he told Fox News.

The highest tariffs announced by China will apply to industrial chemicals, electronic equipment, precision machinery and hundreds of food products.

Beijing is running out of U.S. imports to penalize because of the lopsided trade balance between the world's two largest economies. Chinese regulators have instead targeted American companies in China by slowing down the clearing of shipments through customs and the processing of business licenses.

The new tariffs are likely to hurt exporters on both sides. The increases already in place have disrupted trade in such American products as soybeans and medical equipment and sent shockwaves through other Asian economies that supply Chinese factories.

Forecasters have warned that the U.S. tariff increases could set back a Chinese recovery that had appeared to be gaining traction. Growth in the world's second-largest economy during the January-through-March period held steady at 6.4% compared with a year earlier, supported by higher government spending and bank lending.

The tensions "raise fresh doubts about this recovery path," said Morgan Stanley economists in a report.

The latest U.S. duties could knock 0.5 percentage points off annual Chinese economic growth, and that could widen to 1 percentage point if both sides extend penalties to all of each other's exports, economists say. That would pull annual growth below 6%, raising the risk of politically dangerous job losses.

China's state media tried to reassure businesses and consumers that the ruling Communist Party has the resources and policy tools to respond.

"There is nothing to be afraid of," said the party newspaper People's Daily. "The U.S.-instigated trade war against China is just a hurdle in China's development process. It is no big deal."

A stumbling block has been U.S. insistence on an enforcement mechanism with penalties to ensure Beijing carries out its commitments. Economists say Chinese leaders probably reject that as a violation of Chinese sovereignty.