Assistant Head Coach/Linebacker Coach Taver Johnson will take over through the rest of spring practice.

“Our expectations of character and integrity in our employees can be no less than what we expect from our students,” Long said. “No single individual is bigger than the team, the Razorback football program or the University of Arkansas.”

Long said the search for a new coach begins now.

“I assure you we will seek a head coach that possesses the expertise, leadership skills and character to maintain Razorback football as one of the nation’s elite programs,” he said. “We will maintain a program of student-athletes and coaches that all of Arkansas and Razorback fans across the nation will be proud.”

With thousands watching online across the country, Long made the announcement to both local and national media during a news conference on the floor of Bud Walton arena. He says Petrino was “terminated with cause” and there was no buyout agreement.

Petrino was informed of Long’s decision in writing as part of the terms of his contract. 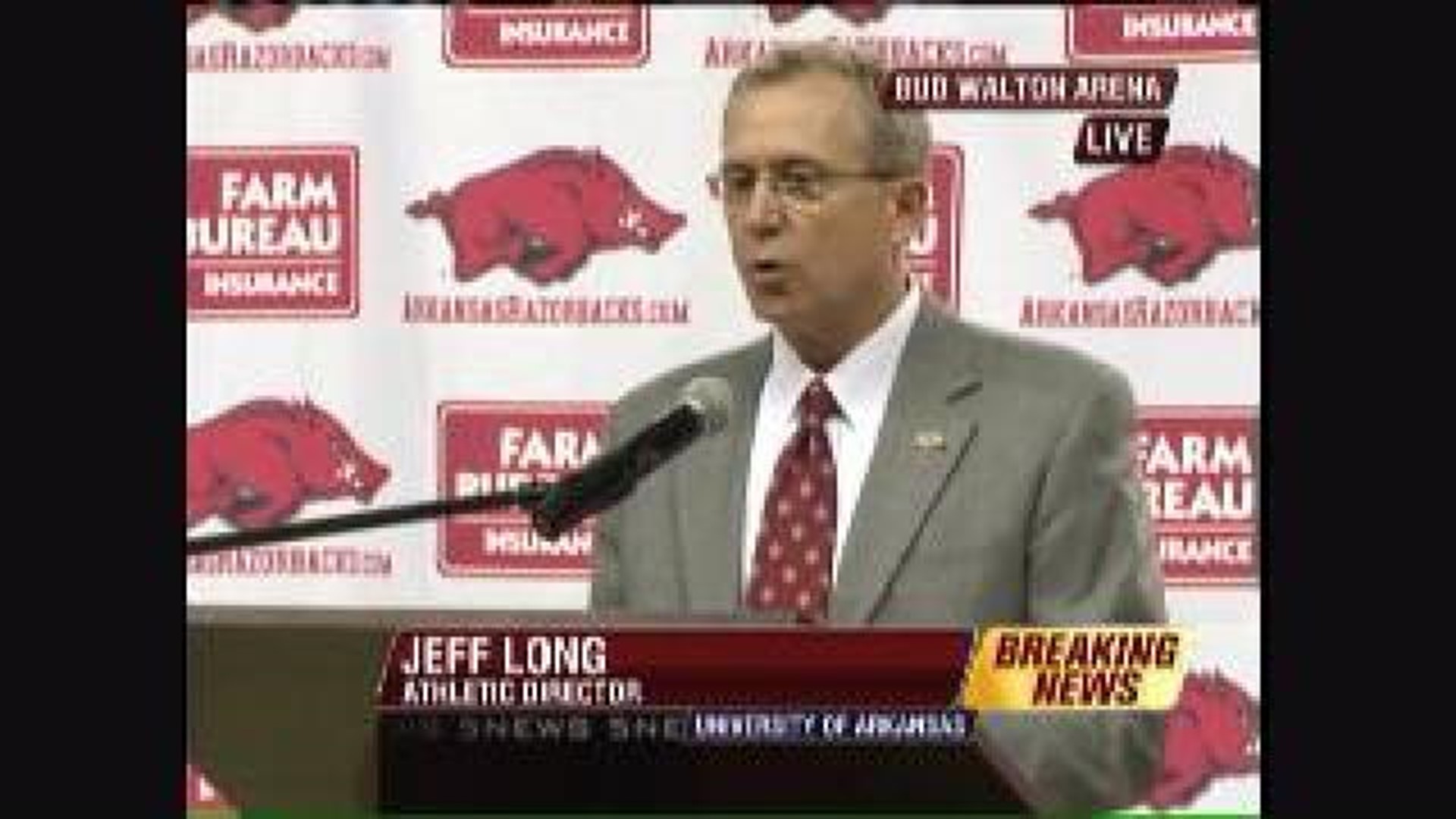 Long says he interviewed those involved in the accident and claimed his review “raised several concerns” that made him look into the personal relationship he had with Jessica Dorrell.

By itself, Long says Petrino's relationship to Dorrell was not against University policy. However, he says it gave her an "unfair and undisclosed advantage" for a position on Petrino’s staff.

Long says Dorrell was one of 159 applicants and Petrino was a part of the selection process, which "constitutes a conflict of interest."

According to Long, Dorrell was given a "gift" of $20,000 cash by Petrino. Long was not told of this exchange prior to Petrino’s recommendation to hire Dorrell. But Long did confirm it was not money from the university.

Long was not willing to talk about how long Petrino’s relationship Dorrell had gone on, but said it was a "significant amount of time." 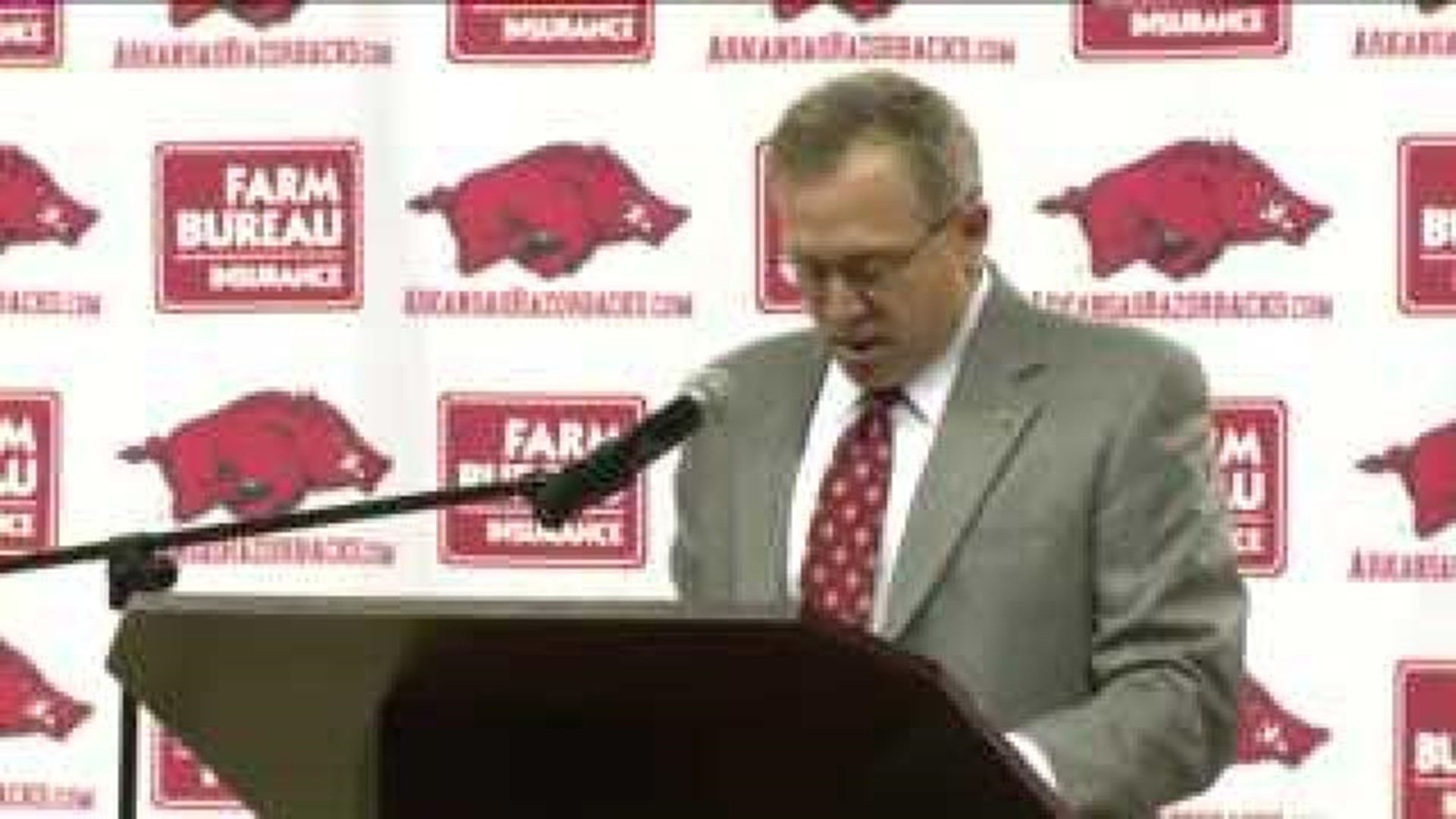 The Razorback athletes are concerned about Petrino’s firing, according to Long. The athletic director became emotional at the podium as he discussed telling the students about Petrino's firing.

"People's live are affected," Long said. "Those are the things sometimes we miss."

Long told the media he was disappointed in Petrino.

"His actions have resulted in me having to take this action," Long said.

Long says Dorrell is still employed at the university, but would not divulge many details because it is a "personnel issue."

Petrino was placed on administrative leave on April 5, after new information on his motorcycle accident involving a female subordinate surfaced. Arkansas State Police released an accident report that stated Jessica Dorrell, 25, was riding on the back of Petrino’s motorcycle when he crashed Sunday, April 1.

Petrino told 5NEWS after a news conference he was alone at the time of the accident. He’d told the same story to his boss, Long.

Dorrell was not injured in the accident on Highway 16 near the Crosses Community in Madison County. Petrino said sustained damage to his C2 vertebra and a broken or cracked rib.

The state police report states Petrino and Dorrell were not at the scene of the accident when the trooper arrived.

The two were picked up by an Ozark couple and their son who happened to drive by at the time of the accident. They dropped Petrino and Dorrell off at East Hunstville Road and Crossover in Fayetteville, the report states. Dorrell left in her personal vehicle and Petrino was taken to Physicians’ Specialty Hospital by Capt. Lance King, according to the accident report.

Petrino said he wasn’t speeding on the curves of the two-lane highway, but that the sun and a gust of wind may be to blame for the accident. Petrino said he had “absolutely had no alcohol in my system.”

On April 9, state police released a review of Capt. King’s involvement in the accident and determined he did not any violate policy or laws.