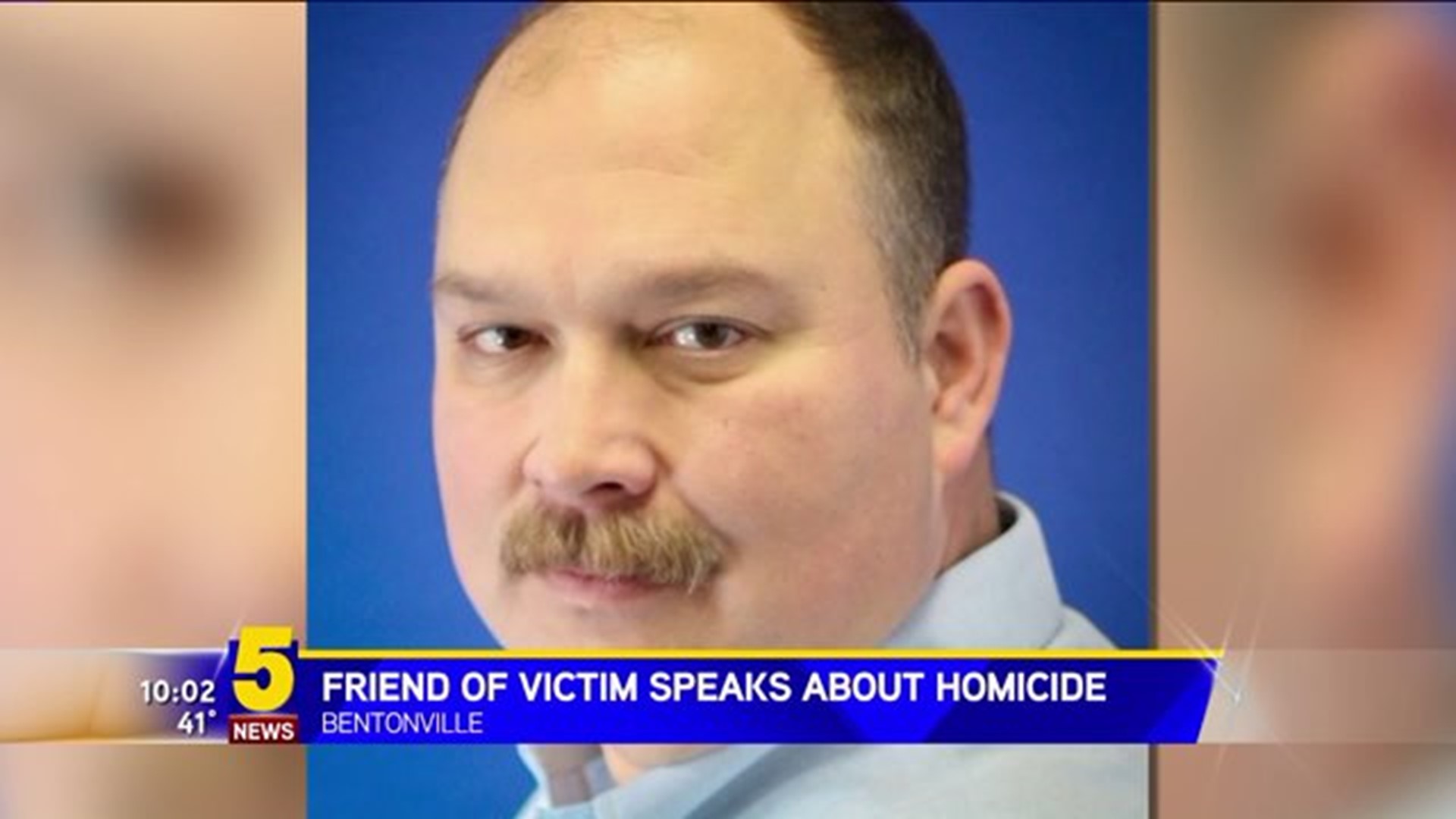 BENTONVILLE (KFSM) -- Bentonville police arrested a suspect Monday (Feb. 22) in connection to a death investigation that began in November 2015.

James Andrew Bates, 31, of Bentonville was taken into custody on suspicion of first-degree murder in the death of Victor Parris Collins, 47, of Centerton, according to a probable cause affidavit released by the Benton County prosecutor.

The affidavit states the Arkansas State Crime Lab ruled Collins death a homicide by strangulation with a contributing cause of drowning.

Bates called 911 at about 9:30 a.m. on Nov. 22, 2015 and notified dispatchers Collins was dead in his hot tub on the back patio at his home on SW Elm Manor Avenue, the affidavit states.

Bates told officers he had invited Collins and two other friends, Owen McDonald and Sean Henry, to his home the night before to watch a Razorback football game during which they drank beer and took several shots of vodka, according to the affidavit.

After Henry left, the suspect, the victim and McDonald decided to get in the hot tub where they continued to drink until about 1 a.m. when Bates went to bed for the night leaving Collins and McDonald in the hot tub, the affidavit states.

Bates said he found Collins floating face down in the hot tub when he woke up several hours later, according to the affidavit.

After getting consent to search Bates’ home, detectives found Collins floating face up in the hot tub and noticed the water was tinted red and appeared to contain bodily fluids and blood, the affidavit states. They also noticed Collins had a black eye, a cut on his eyelid, his lips were swollen and bruised, and he was bleeding from his mouth and nose, according to the affidavit.

The crime lab later determined the blood belonged to Collins, according to the affidavit.

Detectives also noticed the hose had been used, which they noted was unusual given the freezing temperatures, the affidavit states. They determined the evidence pointed to a struggle and a cover-up, according to the affidavit.

Over the course of the next several days, detectives interviewed Bates and several witnesses and collected more evidence, the affidavit states.

Phone records show Bates had texted a woman throughout the evening, then placed several calls to his father, friends, including McDonald, and the Flying Fish restaurant overnight, according to the affidavit. All of the calls were cancelled before they had a chance to go through, the affidavit states.

Bates told investigators he didn’t remember making the calls and claimed they had been so-called butt dials, according to the affidavit. Detectives discredited that claim since Bates kept his phone locked by pass code or finger print ID and noted the call times were not consistent with his statement that he had gone to bed at 1 a.m., the affidavit states.

During one of their interviews with Bates, investigators took photos of small cuts and scratches on his hands, which Bates claimed were caused by his cats and Crossfit workouts, according to the affidavit.

Police then interviewed McDonald who told them Collins was alive when he left Bates’ house and McDonald’s wife confirmed her husband returned home at around 12:30 a.m., the affidavit states.

Detectives determined McDonald also got a ride from a concerned neighbor who saw him walking through the neighborhood while intoxicated. Investigators note there was no physical indication that McDonald had been in a struggle with someone.

Detectives then went back to Bates’ home and did a more extensive search of his hot tub where they found a broke pair of glasses belonging to Collins, Collins’ wedding ring and a broken shot glass at the bottom of the spa, according to the affidavit.

They also took photographs of Bates’ whole body and discovered he had a large bruise, as well as several deep scratches on his abdomen, back and arms, the affidavit states.

Investigators concluded Bates was the only person with Collins at his home after midnight, the affidavit states.

Bates is currently being held at the Benton County Jail without bond.

People who said they've known Bates for years told 5NEWS everything in the probable cause affidavit is completely out of character.

According to a Go Fund Me page set up for the Collins family, memorial services for Collins were held in Bentonville and in his native Georgia.

Jamie Gianfala, a long-time friend of Collins', said he was shocked to hear his friend had been murdered.

"For him to die this way, and for it to be a homicide, it really does bother me," Gianfala said. "Because, he was the kind of guy who prevented that kind of stuff."

Collins was a former law enforcement officer before moving to Arkansas with his family. The Canton Police Department in Canton, Georgia confirmed Collins was a police officer there from 1998 until 2010. Prior to that he had worked as a deputy at the Cherokee County Sheriff's Office in Georgia.

A lieutenant with the Canton Police Department said Collins had had several knee surgeries and moved to Louisiana and then Arkansas after his wife, Kristine, was transferred to those states for her job with Walmart.

The Go Fund Me page states Victor and his wife were married for more than 18 years and had five children.