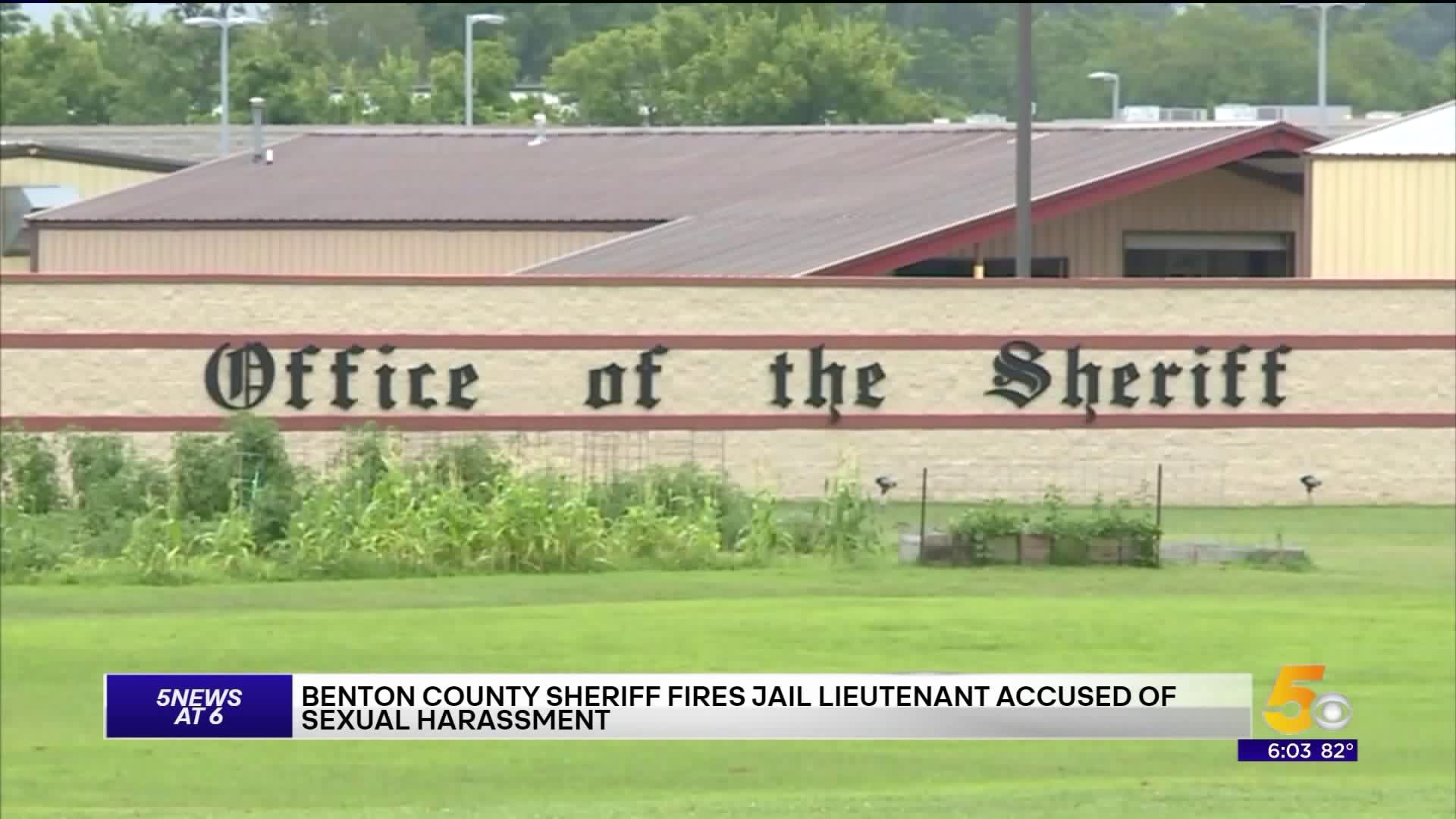 BENTONVILLE, Ark. (KFSM) — The Benton County Sheriff's Office has fired a detention supervisor following several complaints of sexual harassment from female employees, many of whom felt their allegations "went nowhere."

According to an internal investigation obtained by 5NEWS, the sheriff's office fired the lieutenant on July 16 after it "lost confidence" in him as an employee.

"(His) actions of assaulting two female co-workers/employees will not be tolerated within this organization," Major Kenneth Paul wrote in his internal affairs investigation addressed to Sheriff Shawn Holloway and Chief Deputy Meyer Gilbert.

Sgt. Shannon Jenkins, spokeswoman for the sheriff's office, reiterated that sentiment in a statement to 5NEWS on Monday (July 29):

"During the course of the investigation it was found that (the lieutnant) had acted inappropriately. Any type of sexual harassment or work place harassment will not be tolerated. Upon the review of the internal, Sheriff Holloway ordered the immediate termination of (the lieutenant)."

Jenkins also said the sheriff's office updated its sexual harassment policy and will be conducting a review for all employees in the upcoming months.

5NEWS has chosen to withhold the man's name because he has no criminal charges and was not arrested.

The investigation began July 15, after a former employee complained about the lieutenant, saying he "messaged several female employees within the detention facility and carried on inappropriate conversations with (them)" over several years and as recently as 2019, according to the report.

The lieutenant said he was drunk at the time, and although that didn't excuse his behavior, he didn't know what to say to make it better, according to the report.

Paul spoke to several current and former female employees who outlined a list of complaints against the lieutenant. They said he sent them "nasty messages" and requests for "dirty pictures," and also held inappropriate conversations with them at work.

One employee, who "openly cried for several minutes" when she learned the sheriff's office was investigating the lieutenant, relayed a story about the lieutenant grabbing someone's breast in 2013 or 2014, according to the report.

They also described the lieutenant as a "predator" and said, "people who have knowledge of his behavior are/will be afraid to talk."

Often on the days following the messages, the women said the lieutenant would apologize and say he was drunk when he texted them.

The lieutenant denied any inappropriate contact with female employees or asking for pictures, but said he had sent some "flirtatious" messages.

Several employees appeared frustrated over a lack of action from jail administration. One said they "did not feel anything would be done, even today, due to past information that has 'failed to reach the appropriate level,'" according to the report.

One of the first employees investigators spoke with said "when nothing happened to (the lieutenant) ... '(the females) accepted it' since they knew nothing was going to happen."

Paul also learned that someone had "approached (redacted) with sexual misconduct allegations, but they went nowhere." Others said they felt like there "is separation between employees and command staff in the detention facility."

Some painted the lieutenant as vindictive, saying "everyone knew not to cross (him), or you would have a target on your back," while another said they were "afraid things will get back and people will be bullied."

Capt. Jeremy Guyll had been overseeing the jail since January 2017. He was recently moved to administrative lieutenant while Lt. Randy Allsup was promoted to jail captain, according to Jenkins.

Paul also discovered that the lieutenant had clocked in on July 4 for nine hours that he didn't work, despite his timesheet being approved.

Paul said he reviewed gate/door codes for the lieutenant and found no activity on July 4. He also didn't see the lieutenant enter his office on internal jail video cameras.

The lieutenant said, "it was a mistake" and offered to pay back the money.