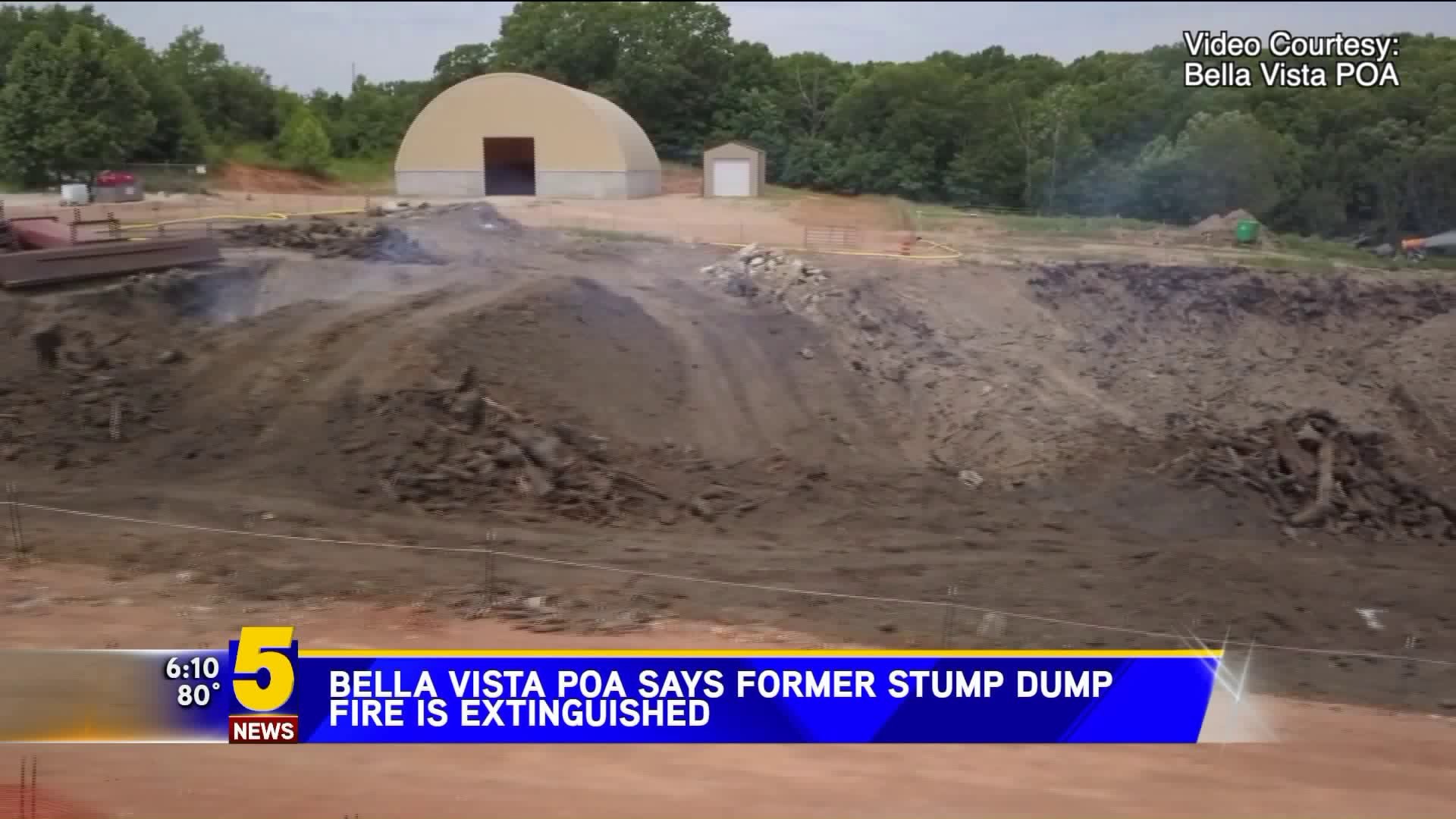 BELLA VISTA, Ark. (KFSM) — The Bella Vista Property Owners Association (POA), which took over the extinguishing a long-burning former stump dump, say the fire is out ahead of schedule.

No fire, smoke or elevated temperature readings from the surface of the site were apparent on Tuesday (June 4), according to the POA.

A drone flight also confirmed no hot spots above background.

"(T)he fire has been extinguished and no hot spots are apparent, but the Arkansas Department of Environmental Quality (ADEQ) will have to confirm these findings.  A formal notice to the ADEQ is being prepared but due to the historic flooding, it could take more time than usual to get the results back," the POA said in a statement.

As the final effort of the emergency response action, crews are focusing on stabilization and protecting off-site properties.

To date, no hazardous substances or hazardous waste was found on the site; only a few tires, a mattress, pieces of metal siding and pipe have been discovered in the debris. These items have been separated for off-site disposal, according to the POA.

The Air Curtain Technology (reconstructed on June 1 as an approximate 30-toot by 12-foot- by 15-foot deep configuration) continues to operate well with no indications of off-site elevated particulate measurements above action levels, the POA said.

The air quality measurements from Monday (June 3) show no elevated concentrations of particulate above the action levels.

However, the POA noted that "from this point forward, the air quality forecast is expected to be an 'unhealthy for sensitive groups' air quality index and higher, as defined by the Environmental Protection Agency (EPA). This is an improvement over prior forecasts."

Crews have been working since May 18 to extinguish the fire on Trafalgar Road, which has been smoldering since July 2018 when debris underground caught fire — likely sparked by a pile of burning brush — and caused smoke from underground to billow up into the air.

The stump dump was leased by the POA from 2008 to 2016. Brown’s Tree Care currently owns the property.

It was intended to be used as a collection area for residents’ stumps, brush and leaves. The POA closed the stump dump down in 2016 after it reached capacity.

The POA is a defendant in a lawsuit that accuses several Bella Vista entities of operating an illegal dump at the site and negligently endangering residents’ health and safety.