Attorney Requests $35,000 Judgment In Lawsuit Against Incoming Alma Mayor Be Set Aside

ALMA (KFSM) — The attorney for the incoming mayor of Alma has issued a motion to set aside a default judgment against his client, who was sued for more than $35... 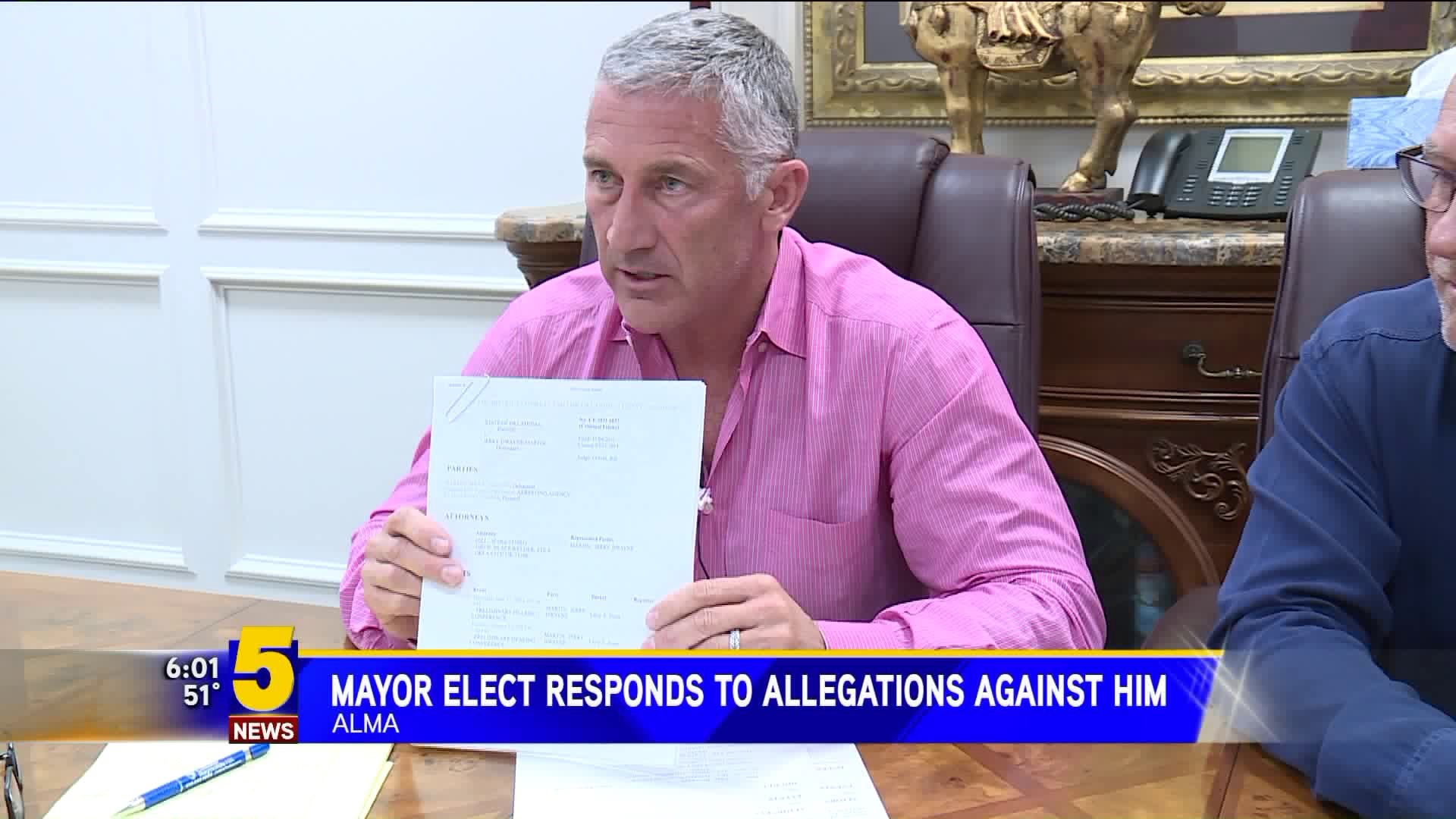 ALMA (KFSM) — The attorney for the incoming mayor of Alma has issued a motion to set aside a default judgment against his client, who was sued for more than $35,000 in charges by American Express.

Matthew J. Ketcham of Caddell | Reynolds filed a motion to set aside the default judgment issued Nov. 1 in favor of American Express National Bank against Jerry Martin, who was elected as the new mayor of Alma in November.

Ketcham says in his lawsuit that his client wasn't properly served in the lawsuit, which was originally filed on May 25.

The default judgment was ordered Nov. 1 by Circuit Court Judge Mike Medlock, who ruled that because Martin failed to appear in the case, he would have to pay the entire amount American Express requested. The full amount was $35,264.91.

According to the original lawsuit, Martin opened an American Express account on April 15, 2014, and ran the card up to more than $35,000. After repeated attempts to seek payment on the account, American Express sued.

Court records show a summons was issued to Martin on May 25, the same day as the lawsuit was filed. An affidavit shows Martin was personally served with the summons and complaint at his home in Alma on June 3 by a process server.

Court records stated Martin "failed to file a proper response" by Oct. 23.  The court requested that the bank's attorney, Hayden Lovelace, file a motion to dismiss or another motion to further the case in a timely manner.

In a 5NEWS interview with the Mayor-elect and his lawyer, Bill Reynolds of Caddell Reynolds Law Firm, Reynolds said he expects the judgment against his client to now be dropped.

"While we were trying to negotiate that transaction a default was entered mistakenly. It shouldn't have happened and it is at no fault of Jerry's, whatsoever. Because he was vigorously trying to take care of this. In fact, the default judgment is going be set aside today and American Express who is the other party has agreed that it should be set aside," said Reynolds. " It's current and it's going to be paid off. It's just a few days before the transactions are completed with the court so it can be dismissed forever."

Reynold's and Martin said at the time of the credit card debt Martin was helping a family member with a medical issue.

"Jerry should actually be commended. How many people will help out their family members and go to substantial financial risk to help them out when they were truly in need?" said Reynolds. "I think he should be commended for being the kind of Mayor a town wants."

The Mayor-elect is speaking out on other allegations he's faced in the past few weeks. Some voters in Alma have read an outlet claiming to be an Alma online news source. The site claims Martin has been charged with felonies, domestic abuse, declaration of ownership to a pawnbroker, driving while on a special suspension and a bogus check.

5NEWS pulled each case from Oklahoma Court's to verify them. Martin set down with 5NEWS, addressed each claim and said he wanted to speak about the allegations to Alma voters.

One the case of the declaration of ownership to a pawnbroker charge out of Oklahoma and on the website, Reynolds said it's not his client in the paperwork. He said the middle name is spelled wrong.

"If you look at these documents, wrong date of birth, wrong spelling of the name. So, what this is is intentional defamation. They know this is a lie and they are telling it to the people of Alma," said Reynolds. "He has absolutely no felony convictions. None whatsoever and to say otherwise is a lie. To say he's been married 8 times is a lie."

On the case of a bogus check, Martin said that case does belong to him.

"Each party getting the divorce thought the other was making a deposit. The deposit didn't get made, a check bounced, these charges were filed," said Reynolds. "He immediately took care of those charges, they were dismissed. It was a mistake. I think anybody who has been through a divorce can understand there is a lot of miscommunication," said Reynolds.

On the domestic abuse, Reynolds said it stems from another person with his same first and last name that was slapped with a protective order from a female. Again, he said it is not his client because the date of birth and address does not match Martin.

"You can't believe everything you see on the internet, you really need to look at legitimate news sources," said Reynolds. "If you are just out there reading sites that people make up and start posting stories and you are believing them- it's malicious intent on those people's part."

Driving while on a special suspension, Martin said the case stems from 1991 when he let his license expire.

"I think good reasonable people will be able to determine the truth," said Martin.

Martin said he is excited to start his term as Mayor.

"We have a lot of good things. Jan. 1  can't get here fast enough," said Martin. "We are going to get to work and start doing some really good positive productive things for our city. Part of what we are going through today is simply what we are about to get rid of. That is really good news. We are going to roll our sleeves up and implement things we need for economic growth."