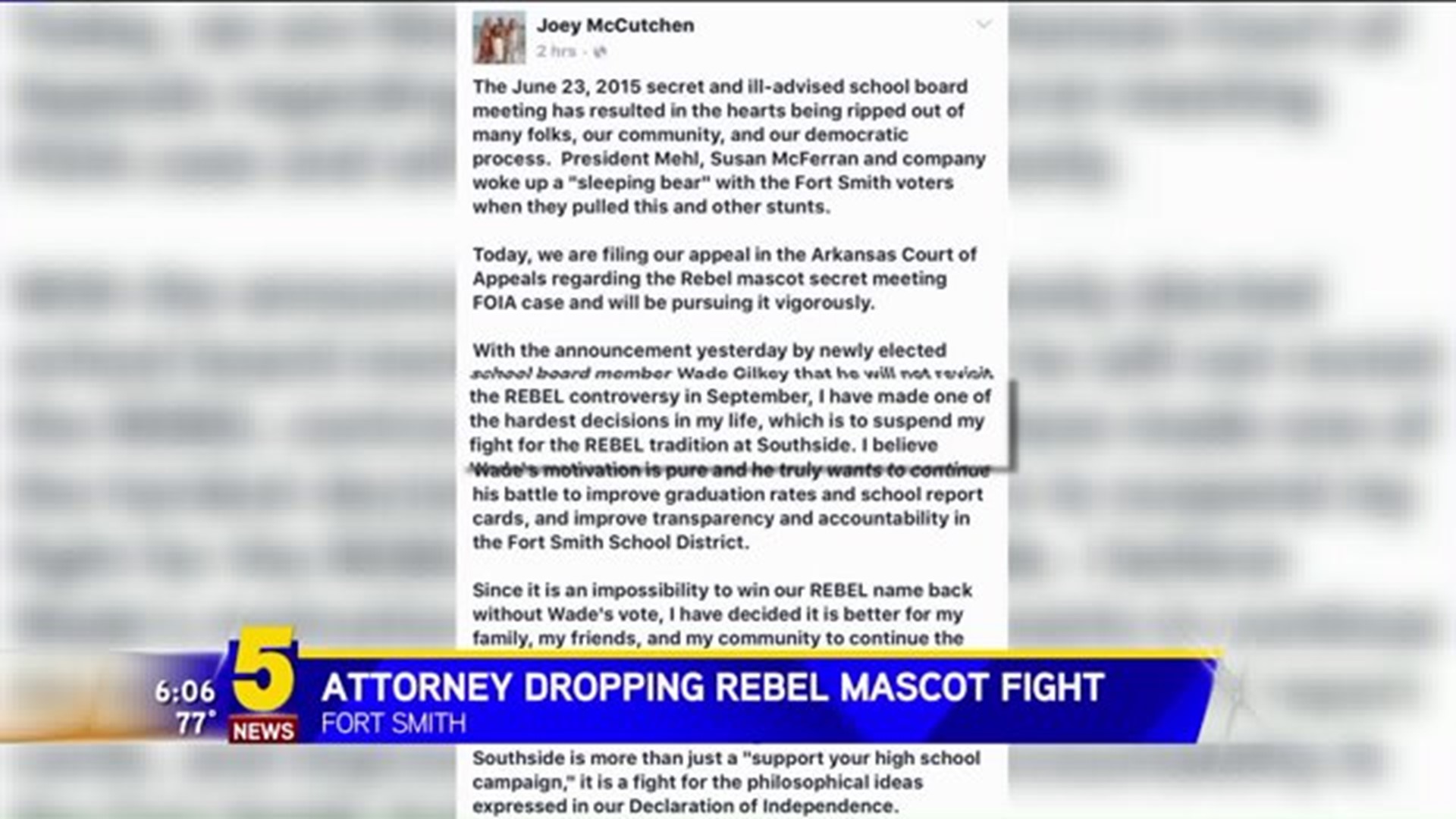 FORT SMITH (KFSM) -- Fort Smith Attorney Joey McCutchen and leader of a group that opposed the mascot change at Southside High School has decided to drop his push to bring the Rebel mascot back, according to post made on his Facebook page Friday (May 27).

McCutchen writes his decision is based on Fort Smith School board member Wade Gilkey's announcement that he will not revisit the Rebel controversy in September.

"I have made one of the hardest decisions in my life, which is to suspend my fight for the Rebel tradition at Southside," the post states. "Since it is an impossibility to win our Rebel name back without Wade's vote, I have decided it is better for my family, my friends, and my community to continue the passionate fight for open and honest government, academic and financial accountability, and other God-given rights instead of pursuing the fight for the Southside Rebel name."

McCutchen also writes: "I believe Wade's motivation is pure and he truly wants to continue his battle to improve graduation rates and school report cards, and improve transparency and accountability in the Fort Smith School District."

Gilkey, who was voted in during the Sept. 2015 school board election, and school board member Bill Hanesworth, who was also voted in at the same time, had been considered supporters of changing the mascot back to the Rebel.

McCutchen believes there are more important things to focus on.

“While we are maybe moving on from the Rebels because two school board members have made that clear that they won't vote in September, I think the bigger issues are there. I think we need to have a clear, sharp focus on transparency, on accountability, and on this monstrous mileage increase that we are seeing,” McCutchen said.

He said this has been one of the toughest decisions he has faced, but he said he believes the people of Fort Smith have learned something valuable from this chapter in Southside history.

“We are united in the fact that we in Fort Smith believe in transparency in government, open government, believe in physical responsibility and we believe in making our education system the best that it can be,” McCutchen said.

In July 2015, the Fort Smith School Board unanimously voted to change the Southside mascot and to end using the "Dixie" fight song. The song was discontinued during the 2015-2016 school year and Rebel will be dropped for the 2016-2017 school year.

The Maverick is now the schools new mascot and the song was changed to "Wabash Cannonball."