ARKANSAS (KFSM) -Hours after news broke that a national atheist organization had put up a billboard in Springdale, church leaders said they would put up their o... 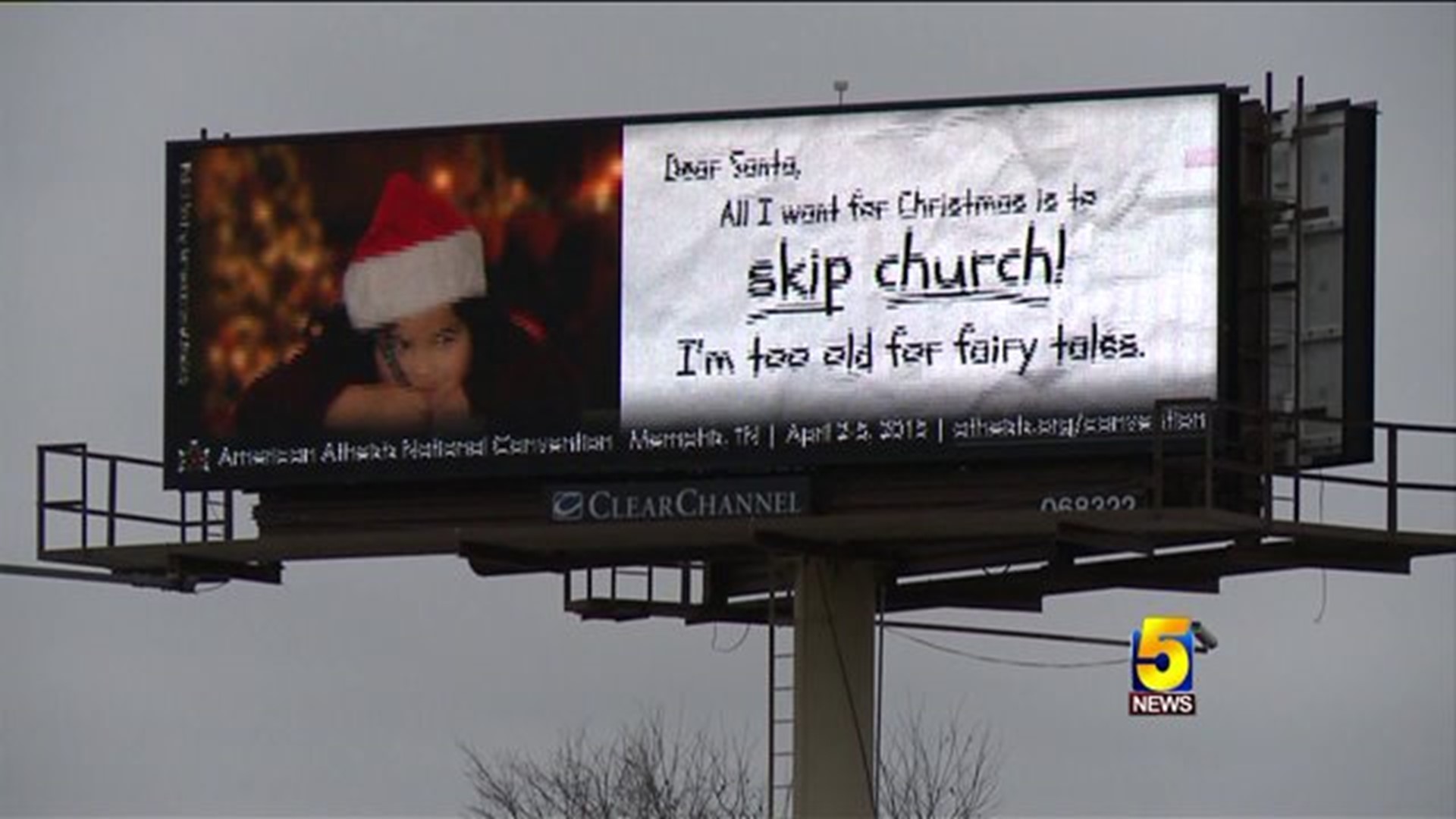 ARKANSAS (KFSM) -Hours after news broke that a national atheist organization had put up a billboard in Springdale, church leaders said they would put up their own billboard nearby to compete with the atheist message.

The group American Atheists said they have put up a billboard in Springdale that depicts a little girl writing to Santa saying that all she wants for Christmas is to skip church because she's too old for fairy tales. The billboard is part of a "firebrand-style" campaign launched in multiple Bible Belt cities including Memphis, Nashville, St. Louis and Fort Smith, according to a post on the American Atheists website. The group also plans to put up a billboard in Milwaukee.

Danielle Muscato, public relations director for American Atheists, told 5NEWS the billboards are aimed at in-the-closet atheists who are pressured to observe religious traditions during the holidays. He said the billboards are to let them know it is OK to doubt the way they were raised and think for themselves.

Leaders of Grace Church in Alma said they plan on putting up a billboard near the atheist advertisement, saying, "Questions, Doubts and Curiosity...All Welcome At Grace Church."

Muscato said he welcomes the church's billboard, saying he advocates people being able to think for themselves on whether to believe in any, or no, religion.

A statement from American Atheists initially said the billboard was in Fort Smith. However, the billboard actually stands just off of Interstate 49 in Springdale, north of Wagon Wheel Road.

The atheist billboard also advertises the annual American Atheists National Convention in Memphis scheduled for April of 2015, according to a post on the organization's website.

“Even children know churches spew absurdity, which is why they don’t want to attend services. Enjoy the time with your family and friends instead,” said American Atheists President David Silverman. “Today’s adults have no obligation to pretend to believe the lies their parents believed.  It’s OK to admit that your parents were wrong about God, and it’s definitely OK to tell your children the truth.”

The group was unsuccessful in one Bible Belt city, though. American Atheists was unable to get their billboard put up in Jackson, Miss. due to push back against the billboard's content from local residents, according to the post.

Muscato said in the website post, “The fact that billboard companies would turn away business because they are so concerned about the reaction by the community to a simple message that not everyone goes to church and not everyone believes in gods shows just how much education and activism on behalf of atheists is needed in the South.”

The billboards will remain on display from Dec. 1 until Dec. 24, according to the post.