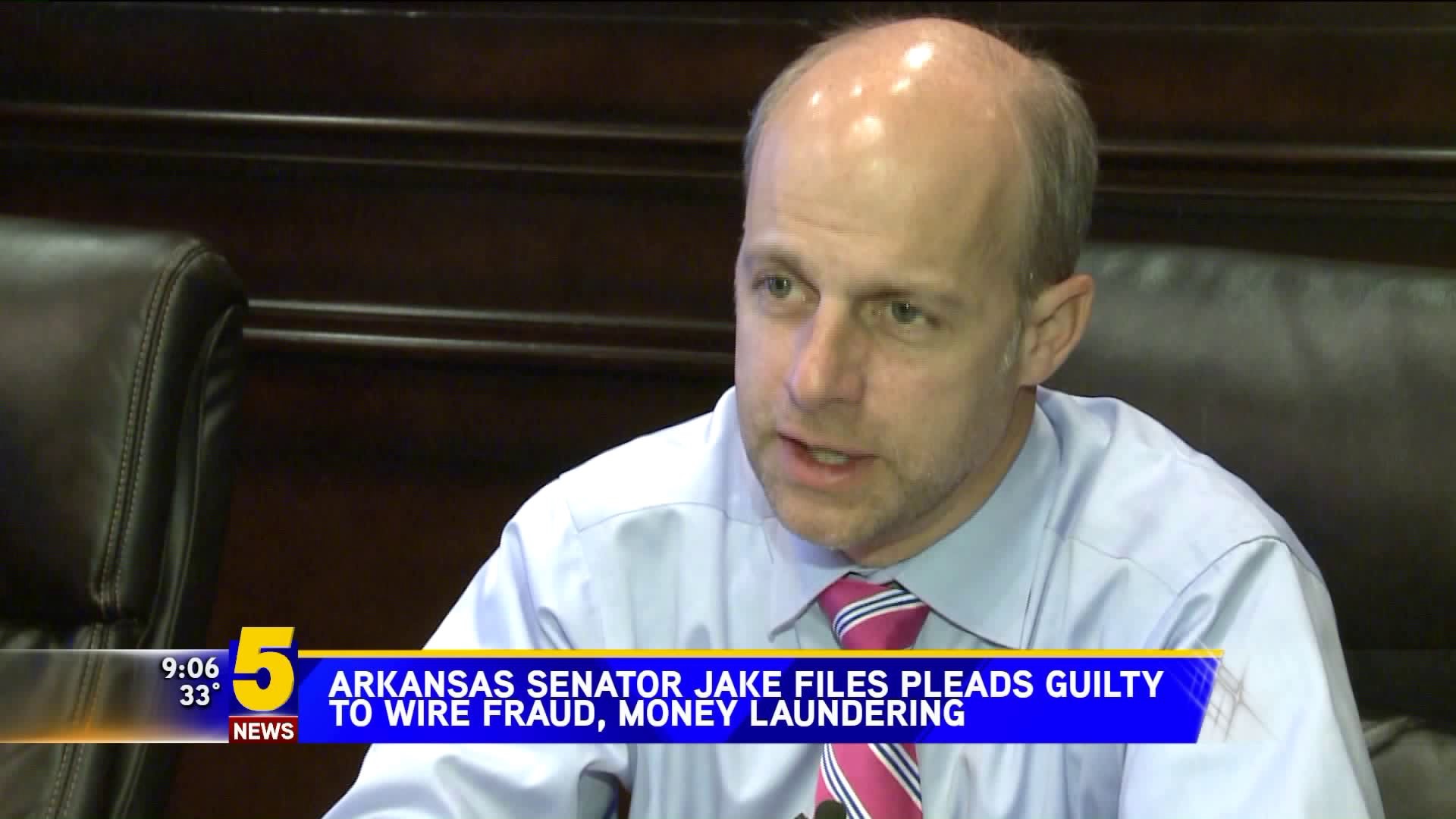 Files, 45, pleaded guilty Monday (Jan. 29) to one count each of wire fraud, money laundering and bank fraud, according to Dak Kees, U.S. Attorney for the Western District of Arkansas.

While serving on the state senate, Files used his office to obtain government money known as General Improvement Funds (GIF) through fraudulent means and personal gain, according to court documents.

Gov. Asa Hutchinson said, "I have spoken with Senator Files today, and he has indicated that he plans to submit his resignation to my office in the coming days.  After learning of his guilty plea to felony charges in federal court earlier Monday, I believe this is the appropriate decision.

Hutchinson continued, "While I have known and respected the Files family for many years, it is essential that the voters are able to trust elected officials to have the public’s interest free from criminal conduct. Given today’s turn of events, it is clear Senator Files will not be able to fulfill his obligations to his constituents."

During 2012 Files and an associate proposed an athletic complex for Fort Smith. It would be called River Valley Sports Complex. Those with the city agreed to fund about $1.6 million of the project, and gave $1 million to Files. However, the project hasn't been finished to date.

In Aug. 2016, Files asked the city administrator if he'd be interested in securing a GIF grant from the Western Arkansas Planning and Development District, according to court documents. The city was eligible for GIF money.

Court documents state that during 2015, the Arkansas General Assembly had appropriated GIF funds to the Arkansas Department of Finance and Administration for disbursement to the Western Arkansas Planning and Development District. The GIF funds were "surplus" of state revenues derived from various sources. The funds would've been utilized by the planning and development district for economic and community development throughout the state.

A few months after speaking with the city administrator, Files helped prepare an application for the city of Fort Smith to receive $46,500 in GIF money, which was suppose to be spent on infrastructure, utility lines, city parks and other similar projects.

Any GIF funds or grants that exceed $20,000 were required to include a minimum of three quotes from vendors bidding on the project or contract to be completed with the GIF money.

Files allegedly created three false and fraudulent bids via the internet. He was granted GIF money for the city but pocketed it for himself. As a result, he is facing one count of wire fraud.

"... Files in his official capacity as state senator, exerted substantial control and authority over a set amount of GIF money that had been appropriated for disbursement by the Western Arkansas Planning and Development District, and was allowed to direct and approve which eligible organizations would receive GIF money and in what amounts," Dak Kees, U.S. Attorney for the Western District of Arkansas.

Files is also accused of having someone open a bank account in their name so that he could conceal his involvement as the actual beneficiary of the disbursement of GIF funds. That person did open a savings account, the GIF funds were transferred into their account and given to Files, according to court documents.

The documents also state that Files instructed that person on how much to withdraw from the account. Some was deposited as cash and some as a cashier's check that was written for FFH Construction.

Even more, Files is accused of bank fraud. First Western Bank was used by Files to make the fraudulent transactions, according to court documents. The documents state that during Nov. 2016 Files knowingly created a scheme to defraud the bank to obtain money, funds and other property owned by or under the control of the bank.

He told bank representatives and stated in his loan that he had a forklift as collateral for the loan. However, gave it to the owner of a masonry company a few month prior to applying for the loan, according to court documents.

He was contracted on a construction project with a masonry company in Altus, Ark.

When it came time for him to pay the masonry company $55,000, Files didn't have the funds to pay.

He will be sentenced during a later date.