LITTLE ROCK, Ark. (KFSM) — A new bill has been drafted that would put new restrictions on vaping in Arkansas. Senator Jim Hendren of Gravette drafted the bill t... 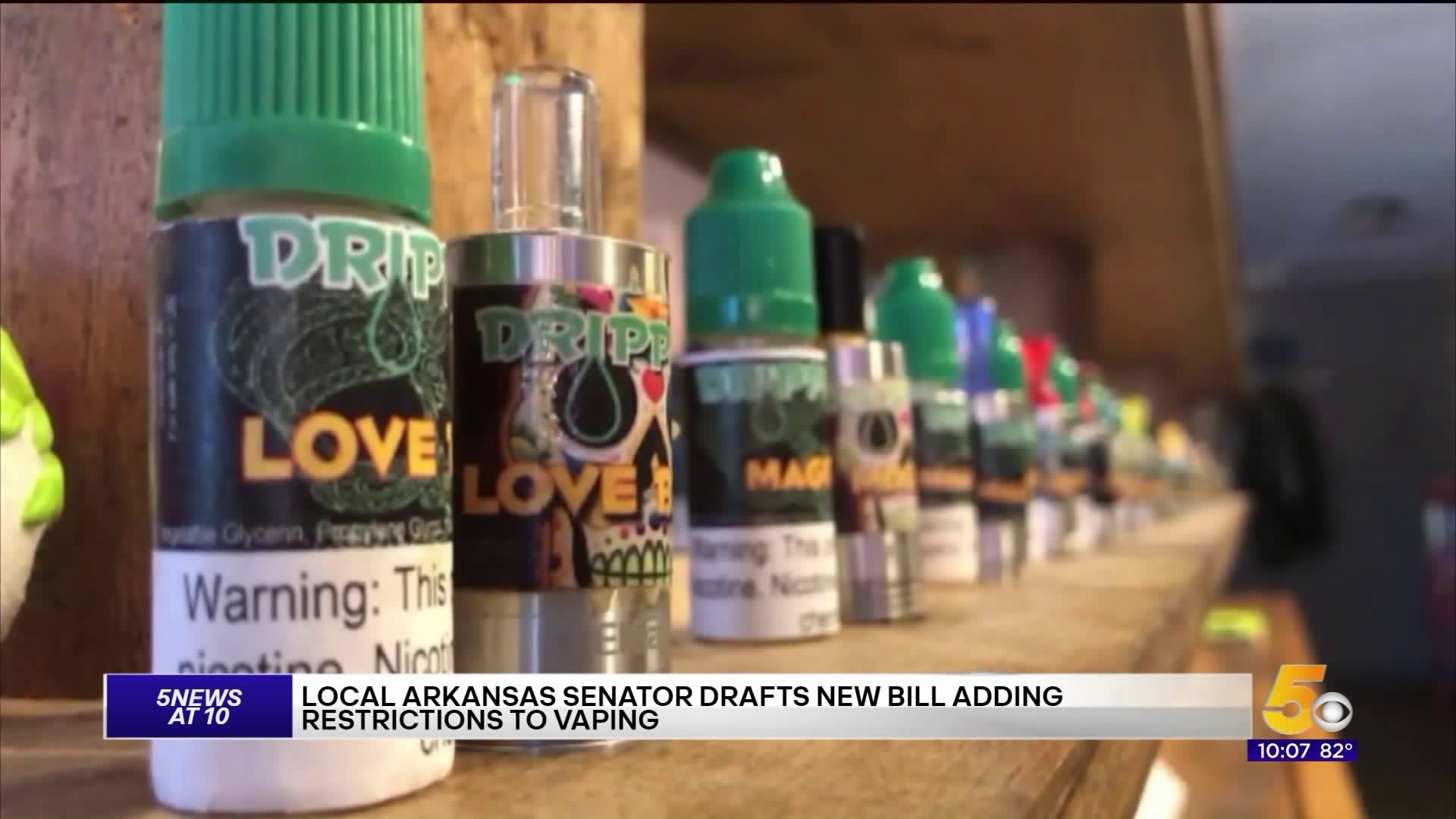 LITTLE ROCK, Ark. (KFSM) — A new bill has been drafted that would put new restrictions on vaping in Arkansas.

Senator Jim Hendren of Gravette drafted the bill that would allow vaping to carry the same restrictions as cigarette smoking.

With the bill, vaping would be taxed like tobacco products and its marketing to minors would be prohibited.

The tax revenue from e-cigarettes would go towards school safety improvements such as purchasing security equipment and hiring security personnel. It would also be used to hire mental health counselors for students with mental health problems and addiction issues.

"The potential harm to our children’s health makes it imperative that we act with urgency,” Hendren said. “The Health Department reports that vaping among teenagers is at epidemic levels, and minors who use e-cigarettes are at risk for contracting severe lung disease."

The bill would prohibit vaping and the use of e-cigarettes in all locations where tobacco smoking is prohibited under the Arkansas Clean Indoor Air Act.

Billboards advertising e-cigarettes would be prohibited within 1,000 feet of a school or playground and companies would no longer be allowed to hand out free samples to minors.

"We slept at the wheel while the tobacco companies found another way around the taxes and they marketed it to youth and now we’ve got a problem we have got to deal with," Hendren said.

The penalty would be a Class A misdemeanor and significantly, the revocation or suspension of the company’s license.

"I’ve circulated a draft bill among legislators, and I’m encouraged by the favorable response,” Hendren said. “Now, the question is when will the legislature have the opportunity to consider it."

Hendren's proposal comes amid a rise of vaping-related illnesses nationwide. Many of those illnesses appear linked to use of cannabis-based oils, though some people reported vaping nicotine products, according to the Centers for Disease Control and Prevention. Arkansas has had three confirmed cases, while three others are probable and four are under investigation, according to the state Department of Health. A joint House and Senate committee was scheduled to discuss the issue Tuesday.

The Arkansas Legislature isn't set to meet again until next year, and Hendren said he hoped Gov. Asa Hutchinson would call a special session before then. Hutchinson, who is Hendren's uncle, left open the possibility of a special session if there's consensus among lawmakers.

"Vaping among our teenagers is a serious national concern, and we need to send a clear message to our young people that there are multiple health risks associated with vaping," Hutchinson said in a statement. "Senator Hendren's bill is the type of legislation that should be considered by the General Assembly either in the next regular session or at such a time when a consensus is reached."

An organization representing vape shops opposed the tax proposal, which would amount to a 67 percent tax on vaping and e-cigarette products. The group, the Arkansas Vape Advocacy Alliance, in July proposed a 2 percent sales tax on vaping liquid.

"A 67% wholesale tax would put all licensed vape shops in the state out of business on day one," Bradley Phillips, a spokesman for the group, said. "No small business can afford to pay 67% to the government on everything they buy and then try to mark it up and sell it on Main Street."