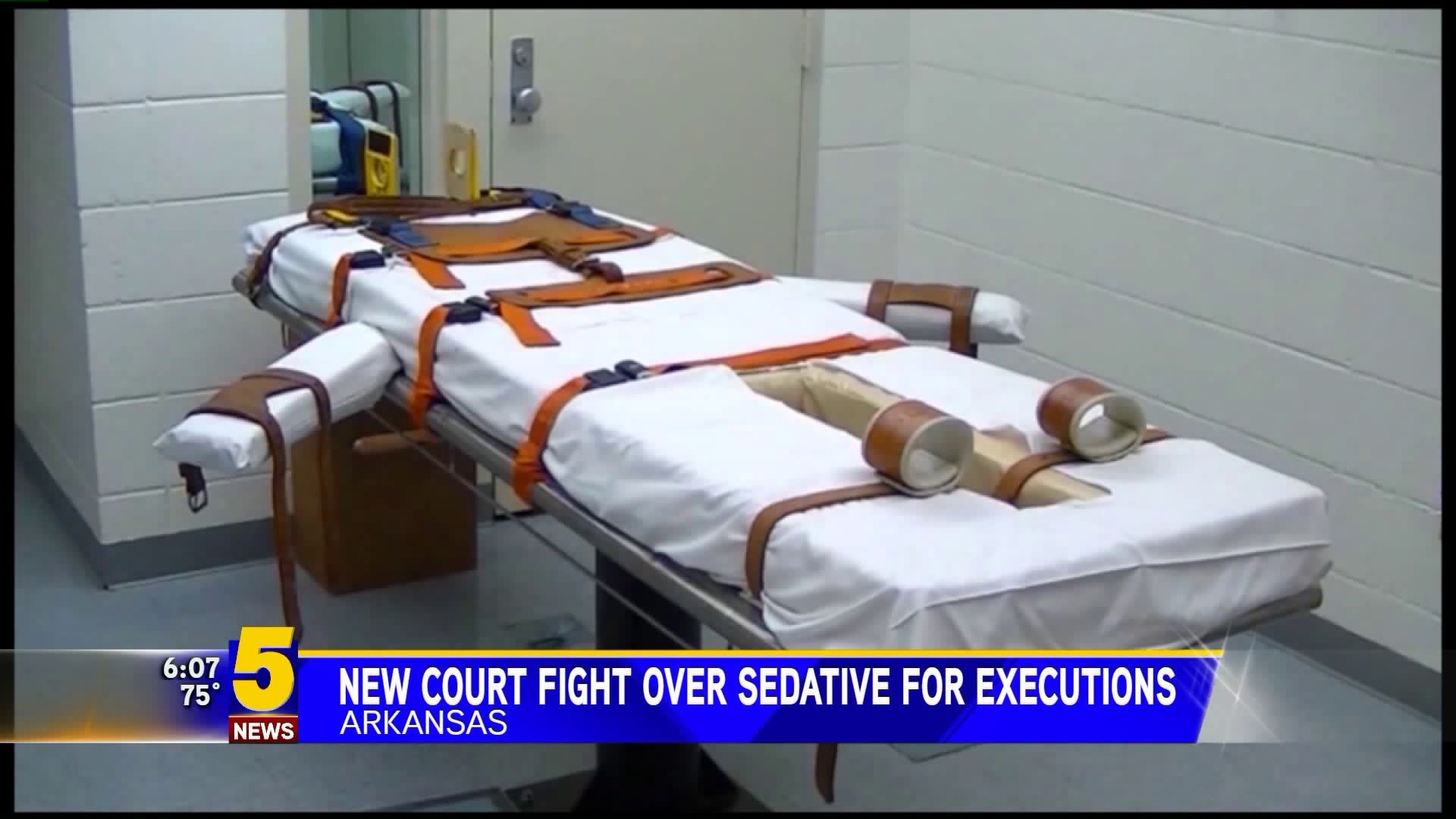 LITTLE ROCK, Ark. (AP) — A federal lawsuit filed by death row inmates has renewed a court fight over whether the sedative Arkansas uses for lethal injections causes torturous executions, two years after the state raced to put eight convicted killers to death in 11 days before a previous batch of the drug expired.

Arkansas recently expanded the secrecy surrounding its lethal injection drug sources, and the case heading to trial Tuesday could impact its efforts to restart executions that have been on hold due to a lack of the drugs. It'll also be the latest in a series of legal battles over midazolam, a sedative that other states have moved away from using amid claims it doesn't render inmates fully unconscious during lethal injections.

States that want to avoid unnecessarily inhumane executions will be watching closely, said Robert Dunham, executive director of the Death Penalty Information Center, which has criticized the way states carry out the death penalty.

But, Dunham added, "states that are watching because they want to figure out how to just execute people will be looking to see what Arkansas is able to get away with."

Only four of the eight executions scheduled in Arkansas over 11 days in 2017 actually happened, with courts halting the others. The state currently doesn't have any executions scheduled, and Arkansas' supply of the three drugs used in its lethal injection process has expired. Another round of multiple executions is unlikely if Arkansas finds more drugs, since only one death row inmate has exhausted all his appeals.

This time, Arkansas isn't racing against the clock to execute inmates before a drug expires. The state currently doesn't have any execution drugs available, but officials believe they'll be able to get more once the secrecy law takes effect this summer.

State Attorney General Leslie Rutledge says the inmates in the case have a very high burden to meet and cites a U.S. Supreme Court ruling last month against a Missouri death row inmate. Justice Neil Gorsuch, writing for the majority in that case, wrote that the U.S. Constitution "does not guarantee a prisoner a painless death." Rutledge called the federal case in Arkansas the latest attempt by death row inmates to delay their sentences from being carried out.

"Juries gave these individuals lawful sentences for committing the most heinous acts against a human being, taking another human being's innocent life," Rutledge, a Republican, said. "We must see these sentences carried out. The families of these victims deserve justice."

Thirty states have the death penalty. Governors in four of them — Oregon, Colorado, Pennsylvania and California — have declared moratoriums, and court rulings have effectively put executions on hold in several others. The list of death penalty states is poised to shrink, though, with New Hampshire lawmakers sending the governor a repeal measure. Bills to repeal or significantly curtail the death penalty have been introduced in 18 states this year, Dunham said.

Much of the trial over Arkansas' process will focus on midazolam, which critics have said doesn't render inmates fully unconscious before the other lethal injection drugs are administered. The U.S. Supreme Court upheld midazolam's use in executions in 2015, but its use continues to prompt legal challenges nationwide. Seven states have used the sedative as the first administered in a three-drug execution process, and two have used it in a two-drug process, according to the Death Penalty Information Center.

Critics have cited problematic executions involving the sedative as evidence that it doesn't work properly. Oklahoma inmate Clayton Lockett remained alive for 43 minutes, groaning and writhing on a gurney after an intravenous line was improperly connected in his 2014 execution. Inmate Joseph Wood gasped for air, snorted and his belly inflated and deflated during the nearly two hours it took him to die during his execution in Arizona in 2014.

Attorneys for a group of death row inmates argue that two of Arkansas' executions in 2017 demonstrate the problems with midazolam. One execution cited is that of convicted murderer Kenneth Williams, who witnesses said lurched and convulsed 20 times before he died. Another inmate, Marcel Williams, arched his back and breathed heavily during his execution, according to a witness.

Based on past court rulings, the inmates will also have to prove there's an alternative to the state's lethal injection method available that's likely to be less painful. The inmates' attorneys have argued those alternatives include firing squads and a barbiturate commonly used in physician-assisted suicide.

Other states have moved away from midazolam over concerns about the drug. Ohio's Republican governor earlier this year ordered the prison system to look at alternative drugs after a federal judge said midazolam could cause severe pain and needless suffering. Oklahoma put executions on hold in 2015 after a series of mishaps that included a botched execution involving midazolam, and the state is now developing a plan to execute inmates using nitrogen gas.

"If the court in Arkansas finds that midazolam is a drug that doesn't do what the state claims that it does and in effect tortures prisoners when it's used in executions, that's going to be another state that may not be able to use the drug," said Dale Baich, an assistant federal public defender in Arizona who has been involved in litigation in that state and Oklahoma over the use of midazolam.

The trial comes weeks after Arkansas Gov. Asa Hutchinson signed into law a measure prohibiting the release of information that could directly or indirectly identify the source of its executions drugs. The measure was in response to state Supreme Court rulings that the current secrecy law doesn't cover the manufacturers of Arkansas' drugs. Arkansas' supply of drugs has expired, and prison officials last year said they wouldn't search for more until the secrecy measure was enacted.

The bill faced criticism from media organizations and death penalty opponents, especially over its criminal penalties for recklessly disclosing the information. Two pharmaceutical companies also objected to the law, saying it would hamper their ability to ensure their drugs aren't used in executions. The new law takes effect in late July.