SPRINGDALE (KFSM) — A child killed at a Springdale apartment was laid to rest on Friday (Sep. 14). Sephylia Rose Fuls (Sophie) died on September 4, of wha... 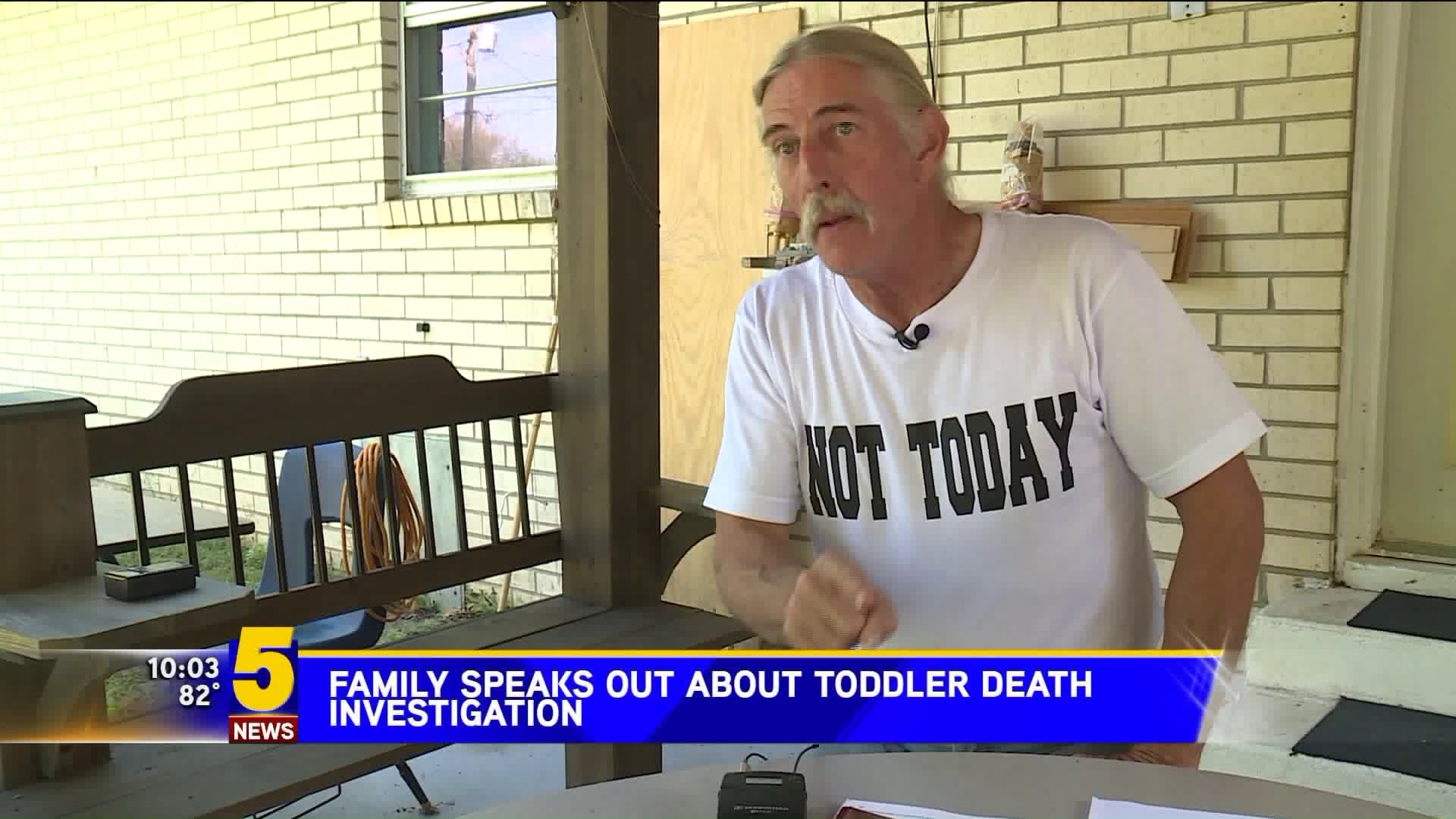 SPRINGDALE (KFSM) -- A child killed at a Springdale apartment was laid to rest on Friday (Sep. 14).

Sephylia Rose Fuls (Sophie) died on September 4, of what her family says was blunt force trauma to the head. So far, no one has been charged in her death.

While the family grieves, they have concerns about how the investigation into the granddaughter's death is being handled. The family says they have filed complaints against the Springdale Police Department and the Department of Human Services.

Homer Randall, Sophie's grandfather, spoke with 5NEWS about her death.

"I've been standing at the gates of hell since my granddaughter died," Randall said.

Sophie's mother found her dead after returning from the store.

According to Randall, Sophie was left in the care of her mother's boyfriend and two older brothers who are five and seven. They called 911.

Sophie was two weeks away from her second birthday.

"We were in the middle of planning her birthday at the time this all happened," he said.

Randall told 5NEWS the medical examiner said the girl's skull and ribs were broken. He said he doesn't believe it was an accident and claims his grandsons blame their mother's boyfriend.

Randall said he feels his civil rights were violated by police and DHS.

"This is a secondary location of the crime scene," he said. "My grandsons were safe and secure in my home."

Randall said DHS took his grandsons from his home in the middle of the night. He wants DHS investigated.

Randall also has concerns about how long it took the Springdale Police to collect evidence.

"Everything they're bringing out now is compromised because they did not secure the crime scene," Randall said.

Springdale Police said they have not heard anything from the attorney general's office about a complaint. As far as the investigation, they stand by their detectives and said they cannot comment since it's an ongoing investigation. The department will have more to say once they turn the investigation over to the prosecutor's office to determine if charges will be filed.

DHS sent 5NEWS the following health and safety factors DCFS staff use in assessing whether a child should remain in a home or be taken into foster care for their safety.

1. Caretaker’s behavior toward children is violent or out of control.
2. Caretaker describes or acts towards the child in predominantly negative terms or has extremely unrealistic expectations.
3. Caretaker caused serious physical injury to the child or made a plausible threat to cause severe physical injury.
4. Caretakers explanation for the injury is unconvincing.
5. The family refuses access to the child and there is a reason to believe that the family is about to flee, or the child’s whereabouts cannot be ascertained.
6. The caretaker has not, cannot, or will not provide supervision necessary to protect the child from potentially dangerous harm.
7. The caretaker is unwilling or unable to meet the child’s needs for food, clothing, shelter, and/or medical, or mental, health care.
8. The child is fearful of the caretaker, other family members, or other people living in or having access to the home.
9. Child’s physical living conditions are hazardous and immediately threatening, based on the child’s age and developmental status.
10. Child sexual abuse is suspected and circumstances suggest that child safety may be an immediate concern.
11. Caretaker’s current substance use seriously affects his/her ability to supervise, protect or care for the child.
12. Caretaker fails to protect the child(ren) from serious physical or threatened harm.
13. Caretaker’s emotional stability seriously affects currently ability to supervise, protect, or care for the child.
14. The caretaker has previously maltreated a child and the severity of the maltreatment or the caretaker’s response to the previous incidents suggest that child safety may be an immediate concern.

This poem was read at Sophie's funeral and the family requested it be shared with the public:

As we come together and say goodbye, set aside our rage?? Not Today.

When will Justice and answers come our way?? Not Today Will the suffering of the most helpless ever stop?? Not Today.

Will peace and comfort come to us?? Not Today Tomorrow is but a journey and time a distant glimpse, will we get there?? Not Today.

For only today do we seek out the answers of a senseless act. And Pray for the guidance and wisdom that we hope to find.

Not Today, Not Even Tomorrow, shall we stand by. No more babies die!!

Not Today Not Even Tomorrow.