Officer Carr, badge number 413, served the citizens of Fayetteville with loyalty, dedication, and courage for two and a half years. 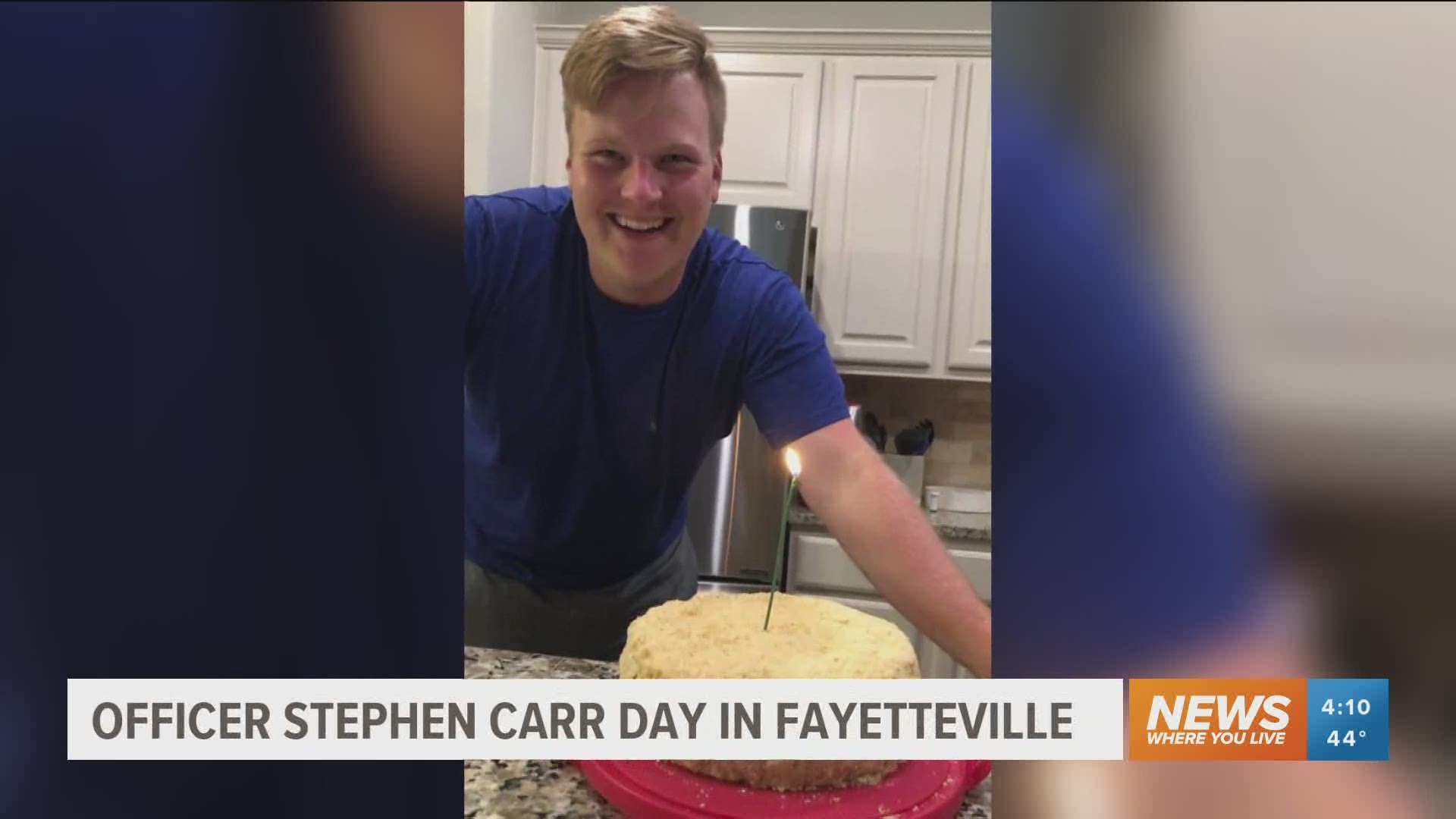 Officer Stephen Paul Carr began working for the Fayetteville Police Department on Apr. 24, 2017 and was killed in the line of duty on Dec. 7, 2019.

"Officer Carr, badge number 413, served the citizens of Fayetteville with loyalty, dedication, and courage for two and a half years," stated Mayor Jordan.

Join us on Monday, 4/13, at 8AM for an address from Fayetteville, Arkansas Mayor Lioneld Jordan on Officer Stephen Carr #413 Day in the city of Fayetteville, AR!

Officer Carr was born in Spring, TX on Sep.12,1992 and grew up in Woodlands, Texas with his sister and parents.

He played football and earned a Bachelor of Science Degree in Economics and Finance.

He moved to Fayetteville to accept a job at Sam's Club and to be closer to his girlfriend.

In 2017 he decided to follow in his father's footsteps and fulfill his life long dream of becoming a police officer.

Credit: Fayetteville Police Dept.
Stephen Paul Carr was a son to his father Paul and late mother Tonya. He was a big brother to Kristin, a boyfriend to Madi and a friend to many.

Mayor Jordan closed the proclamation stating, "Officer Carr badge number 413, served his community and fellow officers with pride, bravery, and dedication. May he rest peacefully knowing that he is greatly loved and will never be forgotten. I Lioneld Jordan, Mayor of the great city of Fayetteville, Arkansas do hereby proclaim April 13, 2020, as 'Officer Stephen Carr #413 Day' in Fayetteville, AR."

Officers with the Fayetteville Police Department handed out Slim Chickens gift cards to residents standing in an unemployment line Monday morning in honor of Officer Carr.

The Walton Arts Center is going blue this week in honor of Officer Carr. The nonprofit performing arts center is adding blue lights around the venue in honor of Officer Carr tonight and will remain blue for the rest of the week to honor all of the healthcare workers, police and firefighters who continue risking their lives to protect our community.

RELATED: 7Brew added "The 413" to drink menu in memory of Officer Stephen Carr