Protesters have been active in Little Rock and across the state Sunday, including a tense protest in Conway. 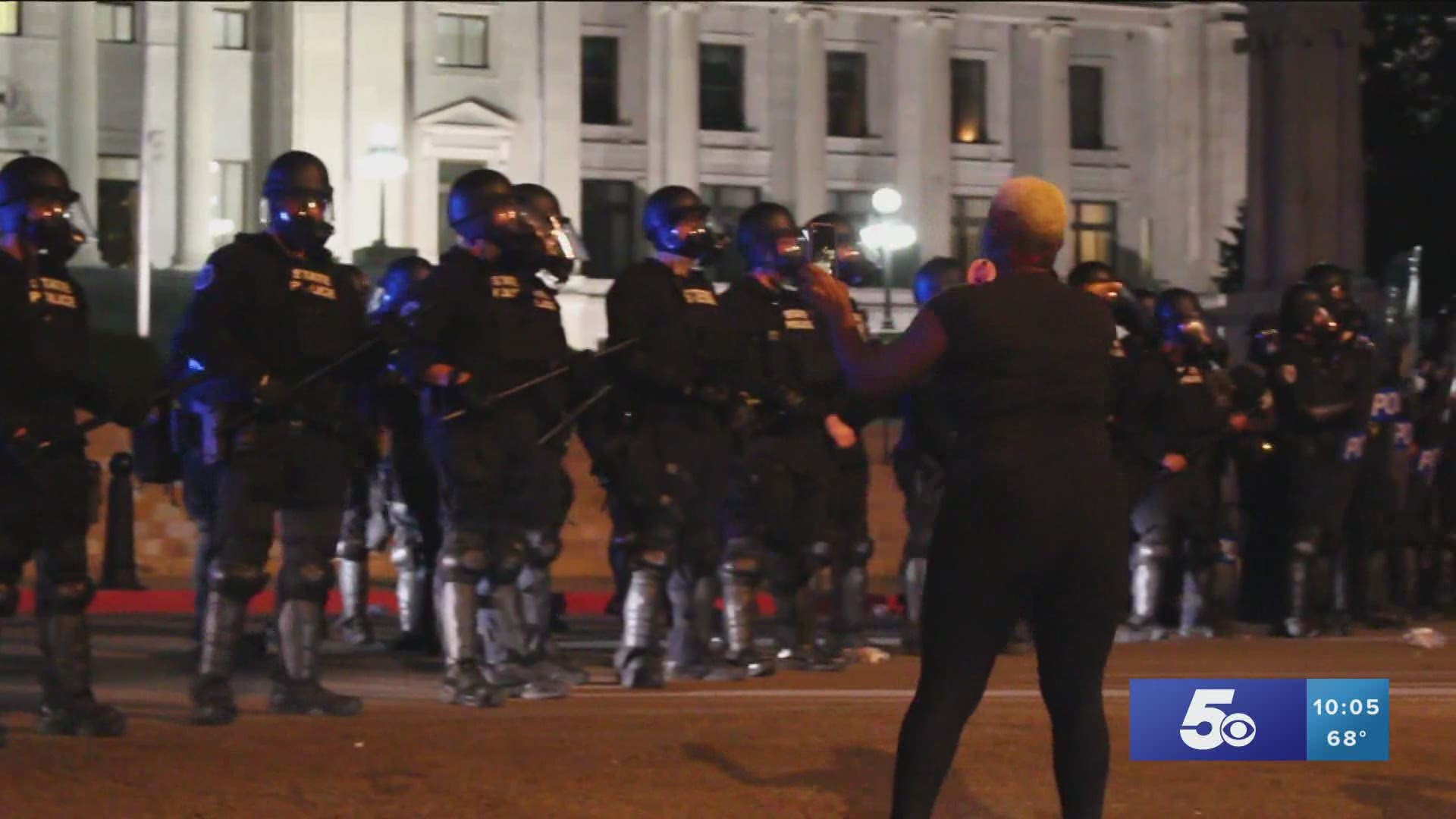 LITTLE ROCK, Arkansas — Protesters in Little Rock have dispersed from the Arkansas State Capitol after police use tear gas for the second night in a row.

Below you will find the latest updates on Sunday's protests in Little Rock, Conway and other cities in Arkansas.

We will try to update it as best we can with the latest information.

Waltin Zomaya, a protester at the Arkansas State Capitol, shared with us their Facebook Live of the moment the tear gas was deployed against protesters.

At one point, a group of people kneel down in the middle of the roadway with their hands when officers throw a tear gas their way.

You can watch the video below:

For the second night in a row, police officers used tear gas to try to disperse the crowd of protesters at the Arkansas State Capitol.

According to reports from protesters on social media, the police fired the tear gas into the crowd.

At least one person was injured during the event, reportedly being "hit in the eye with a tear gas canister."

The protester was later moved to an ambulance nearby for treatment.

Several accounts of the protest say it was a peaceful group that assembled on the Arkansas State Capitol before the tear gas was shot by police.

One protester said they were sitting on the stairs of the Capitol saying "we wanted peace."

"They fired a tear gas canister directly in front of the stairs," the tweeter said.

It is unclear which police department released the tear gas canisters into the crowd of protesters.

Damage has been reported at the Arkansas State Capitol, but no specifics of what or where.

After a short-lived incident where a fire was lit and cars were doing donuts, protesters at the Arkansas State Capitol in Little Rock are now sitting in the roadway and holding up signs.

Some of the signs read "Don't Shoot" and "Black Lives Matter."

Our reporter Mercedes McKay said protesters have started a small fire outside of the Arkansas State Capitol in Little Rock temporarily. She also noticed cars were doing donuts on Capitol Avenue.

A protester tweeted that organizers are trying to gain control of the situation are calling for non-violence.

The Arkansas State Police have shot tear gas at protesters in Conway, asking them to leave the area.

The crowd began to disperse soon after.

A group of Arkansas State Police officers have reportedly arrived in Conway after some tense moments during the protest.

Traffic has been stopped at the Oak and Harkrider Streets.

Protesters have been told by police to stay out of the streets or it would be considered an "unlawful assembly."

Protesters have moved away from the intersection, but are still near the Walgreens in downtown Conway. They are chanting "no justice, no peace" and "hands up, don't shoot" as well.

Protesters in Little Rock have now left City Hall and heading towards the Arkansas State Capitol. They are chanting, "Hands up, don't shoot."

Protesters in Conway are reportedly walking back towards the downtown area, stopping traffic on Oak Street.

There are reports that protesters in Conway reportedly shut down I-40 temporarily.

The Conway Police Department said arrests have been made during the protests.

Protesters in Conway are reportedly at the Conway Commons Shopping Center as police monitor the situation.

Police arrived on scene and some protesters have dispersed from the area.

Protesters have now moved to City Hall in Little Rock.

According to our reporter Mercedes McKay, protesters are peacefully chanting "Black Lives Matter" and "No justice, no peace."

Another group of protesters are standing at the corner of Broadway and Markham holding up various signs.

A group of protesters have blocked traffic and 12th and Pine streets in Little Rock.

According to reports, there is a "passionate dialogue" between police and protesters near the 12th Street Station.

The protest is reportedly moving from the 12th Street Substation towards City Hall.

Smaller protests have popped up across Arkansas on Sunday.

A small group was holding signs at the corner of Oak and Harkrider in Conway.

In Hot Springs, a group of people have lined the sidewalk of Bathhouse Row with signs and an Arkansas flag.

A group of protesters have also started a March for Justice rally in Jonesboro near South Caraway Road.

Protesters were also seen outside the Mosaic Templars Cultural Center on Broadway Street in Little Rock.

Governor Asa Hutchinson said Sunday morning that "it is important that voices be heard to express hurt, anger, and frustration about this injustice."

"While vandalism and defacing public property are against the law and contrary to the spirit of non-violent protest, I am hopeful that we can listen better, engage more and ultimately unite to support equal justice for all," he said.

THV11 reporter Ashley Godwin spoke with Ms. Clara Sunday morning at the Arkansas State Capitol, who told her that the conversation is not over. Ms. Clara said that "she holds racial justice close to her heart."

Mayor Scott said throughout the day there were several peaceful protests in Little Rock and that the Little Rock Police Department protected the protesters during that, including when protesters made their way onto I-630 temporarily.

"While some may disagree with what transpired last night, but we have to understand that we have people in a city, in a land that are experiencing hurt, heart aching pain," the mayor said. "Pain of not just of George Floyd in Minneapolis, but pain of black men and women that have experienced deaths this year, last year and many years ago."

Scott said there wasn't any major damage after there was some graffiti and broken windows near the Arkansas State Capitol.

"We will focus on peace, protection, and opportunity for all," Scott said.

Little Rock Police Chief Keith Humphrey said there was some damage and vandalism at the state Capitol building.

Humphrey also said there were several incidents of damage throughout the downtown area.

Someone also drove through the front door of the Target on University Avenue in attempt to steal some items. The suspects were arrested at the scene.

"As a police department we are there to assist individuals, not hinder their first amendment right," Humphrey said.

No arrests were made except for the two at the Target.

Protesters made their way back to the Capitol where someone had spray painted "Black Lives Matter" onto the steps.

Another group pulled down the flags and burned at least one of them.

Around 10 p.m. on Saturday, Governor Asa Hutchinson announced that he directed Arkansas State Police to "work with local law enforcement to stop the damage to the Capitol."

Reports then started coming out on social media from protesters that state police were shooting tear gas as protesters.

Eventually a group of protesters made their way back to the Capitol. A standoff between state police and protesters at the Arkansas State Capitol began around 11:30 p.m.

Someone in the crowd threw an item at the state police and officers then deployed more tear gas, which made the crowd disperse and leave the area.

At least one officer was injured at rocks were reportedly thrown at her during the protests.