Local bears are making appearances in towns; Experts give tips on how to react if encountered

Black bears rarely become aggressive when encountered, but it is important to know how to react in the event of an up-close encounter. 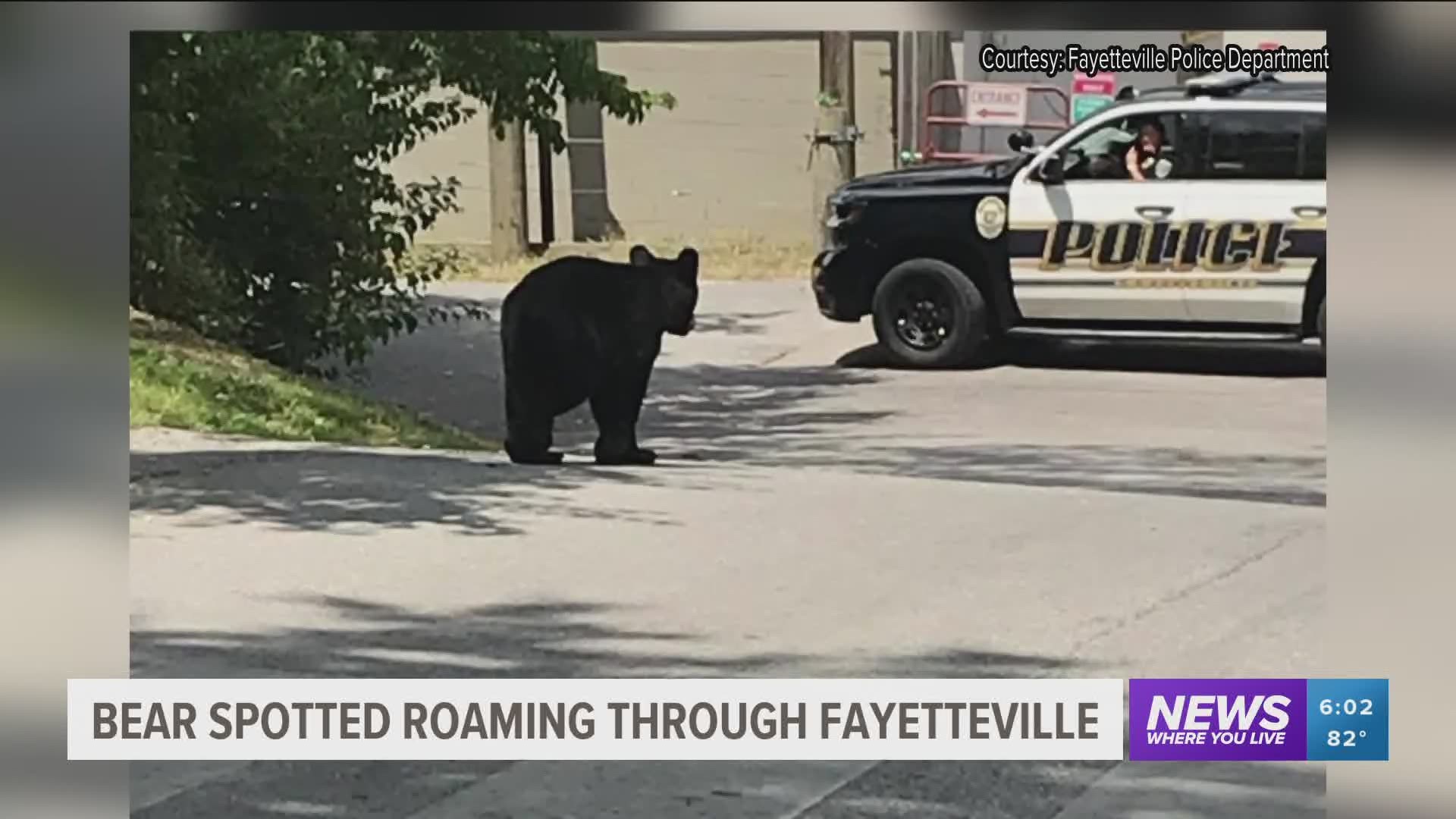 FAYETTEVILLE, Ark. — Local bears seem to be getting bored with living a socially-distant lifestyle in self-isolation. Can we blame them though?

Black bears have been spotted, photographed, captured and relocated in several local cities and neighborhoods over the past few days, including Fayetteville, Alma and Ozark.

Black bears rarely become aggressive when encountered, and watching them can be a wonderful experience when done at a safe distance, but it is important to know how to react in the event of an up-close bear encounter.

Bears are intriguing creatures, often associated with the stuffed best-pals of our childhood and favorite cartoon characters, such as Winnie the Pooh.

The Fayetteville Police Department (FPD) couldn’t resist adding a little humor when posting an update to Facebook regarding a bear that was spotted at multiple Fayetteville locations on July 22.

“Fayetteville PD came across Yogi hunting for picnic baskets. While attempting to direct this bear out of town, it got away in the area of West & Spring,” FPD shared.

Fayetteville Police and animal services were eventually successful in safely rescuing the bear on Wednesday.

Humor and adoration for the cuddly fluffs aside, there have been numerous reported black bear attacks across the country over the past month and it is important to inform ourselves and our children about bear-safety.

Jaime Sajecki, a black bear project leader with the Virginia Department of Game and Inland. Fisheries says, “Know what to do when you see a bear. NEVER run from a bear. Don’t approach a bear. Just quietly move away and leave the area. However, if a bear does approach you, make yourself look big, make loud noises, clap your hands, and continue to back away.”

On July 14, Dennis Shores, Patrol Sergeant for the Alma Police department, managed to run a bear up a tree using the ‘big and loud’ technique, which bought police time as they waited for an NWA Game and Fish Bear Biologist to arrive with assistance.

While normally the ‘big and loud’ reaction is only advised if a bear is approaching you, this particular bear had been on the run in Alma for a month or so, had successfully evaded Alma Police’s rescue attempts, and had made his way into the backyard of a heavily populated neighborhood in Alma.

RELATED: Alma Police treed an 'on the run' bear in populated subdivision backyard

A bear was also seen roaming around Ozark on Wednesday (July 22). Ozark Police released a photo of a small bear in a tree. Game and Fish tranquilized the bear and safely released it.

Barbara Simco Harris used the 'Near Me' feature on the 5News app to share a photo of a bear in her yard Thursday (July 23). She wrote, "I live on Devil's Den Road near Winslow. I came home from town yesterday, and this Bear was in my yard."

BearWise is a black bear program that offers communities solutions that help prevent problems with bears as well as safety tips for different scenarios.

Bears must find food to eat, water to drink, safe places to sleep including winter dens, survive fierce weather and raise their young. They need plenty of space to live and to find their own healthy, natural foods.

BearWise shared the following tips on how to respond in the event of a bear encounter.

In a building, by a dumpster or around the corner:

If the bear approaches, follows or charges you, keep reading the sections below.

If a black bear becomes aggressive and approaches you:

If a black bear becomes aggressive and follows you:

If the black bear charges you:

Black bears are very smart and can identify food not only by smell but also by appearance.

Storing food and disposing of garbage properly can mean life or death to a bear because they learn quickly and will return to areas where they find food, which can be dangerous for both people and bears.

Colleen Olfenbuttal with North Carolina Wildlife Resources Commission says, “Coexisting with black bears often means keeping them from getting food and garbage from around your home, business, and farms.”

Defenders of Wildlife is a leading advocate for black bear recovery and says habitat loss, being hit by cars and conflict with humans are all threats to black bears.

BearWise offers the following tips for keeping bears out of homes and businesses.

WATCH: How to Use Electric Fencing to Secure Your Outdoor Attractants

There are precautions that can be taken while hiking, camping or fishing.

“I notice that after the hikers depart, the wildlife comes out, and the first place the animals go every time is the fire ring because hikers have half attempted to burn their food and trash or spit their mint-flavored toothpaste into these pits," said Chloë de Camara, Appalachian Trail Ridge Runner. "The hikers move forward, but places remain immobile, animals become acclimated, and the next round of hikers pay the consequences.”

BearWise shared this list of precautions to take when hiking, camping and fishing:

When hiking or walking:

If your dog is with you:

WATCH: What to do in a Bear Encounter (And How to Avoid One)

Myth: A mother black bear with cubs is always dangerous.

It’s rare for mother black bears to attack a person in defense of cubs because her cubs can climb trees when they feel threatened. When they are up in a tree she knows they are safe.

Your best action is to be calm and give her plenty of room, even if it means you have to change your planned hike or other activity. Never keep approaching her, even if the cubs are in a tree.

Black bear attacks are extremely rare. Most bears will retreat before you are even aware of their presence. That said, always stay alert in bear country and know the best ways to avoid problem encounters.

Fortunately, there have been no injuries associated with the recent rise in bear sightings here in Northwest Arkansas. However, the Associated Press has written numerous stories about bear encounters that have ended badly in other areas of the country.

The following is a list of AP headlines for bear-related stories in July. Click on the links to read the full stories.

Black bear home invasions are on the rise in Connecticut

A bear that attacked a woman near Colorado Springs was euthanized

Bears in backyards are becoming common in the Lehigh Valley