A major cause of the February winter storm power outages remains unaddressed as lawmakers prepare to leave town Monday. Critics say more must be done - and now. 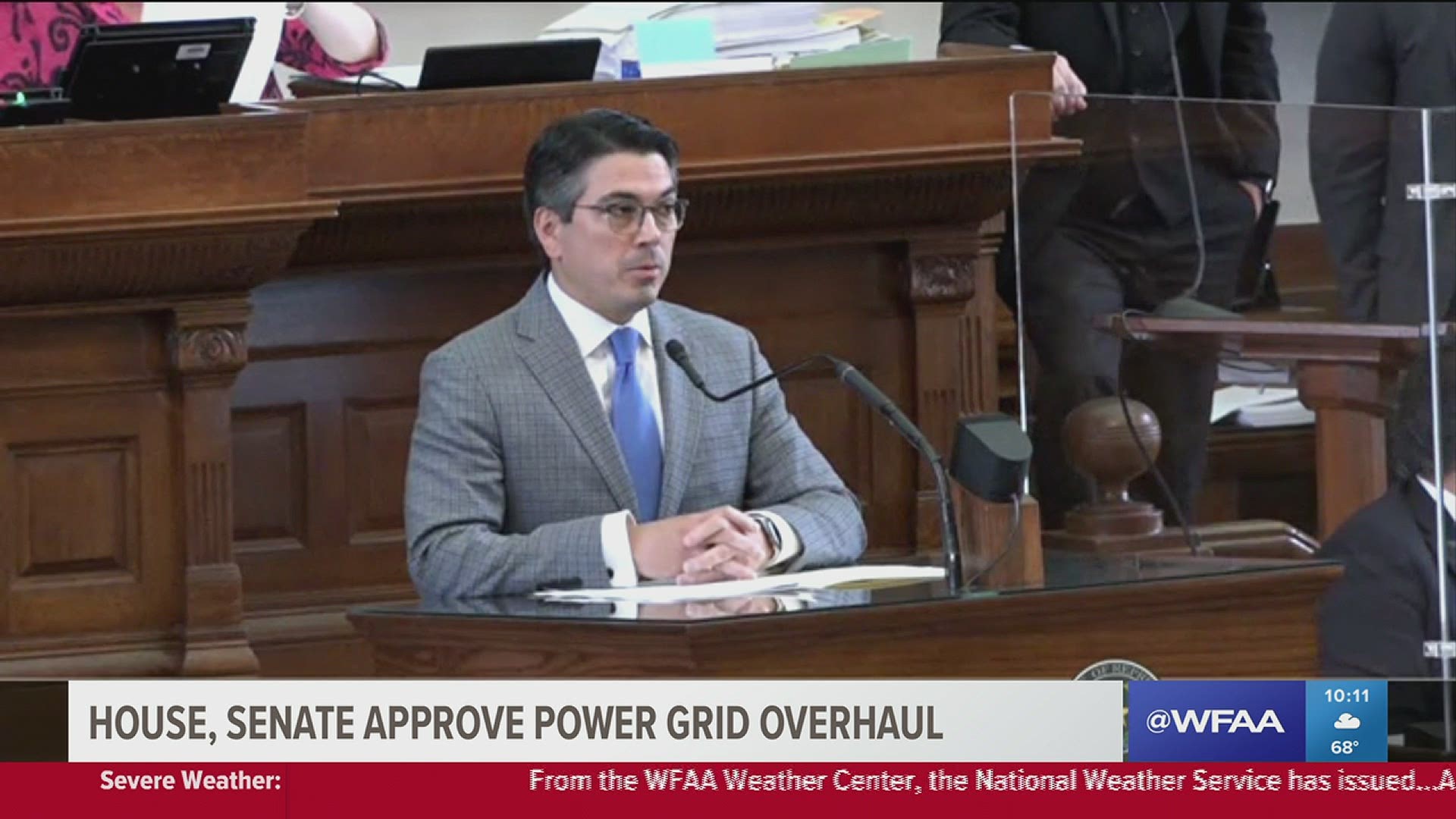 AUSTIN, Texas — As the Texas Legislature closes out another session this Memorial Day and lawmakers head out for picnics with family and constituents, the horror of February’s furious winter storm is fast becoming a distant memory.

The storm left 4.5 million Texans without power for nearly a week, and new analysis found it may have directly, or at least indirectly, led to a staggering 700 deaths, some victims freezing to death in their own homes.

Several things were immediately clear from legislative hearings convened days after the storm: Too many power plants had not properly insulated their pipes and machinery to keep them from freezing during extreme cold. Other power plants that did “winterize” couldn’t get natural gas for fuel because much of the gas industry, too, was ill-prepared for the extreme cold and loss of electricity.

Senate Bill 2 overhauls the board of the Electric Reliability Council of Texas (ERCOT), which oversees much of Texas' power grid, transforming it from a body mostly of market participants, into appointees of the governor, lieutenant governor and speaker of the House.

"This is this body's response to the horrific things we saw during Winter Storm Uri and the issues oversight and accountability, communications failures nd addressing the weatherization issue," said State Rep. Chris Paddie, one of the main architects of the legislation. "I think we came up with some really good solutions to hopefully prevent those types of things from happening again."

The biggest question now: Did our political leaders do enough in Austin to ensure that massive power outages never happen again?

“We're going to have another disaster,” said Tom “Smitty” Smith, former head of the consumer advocacy group Public Citizen and long-time observer of politics in Austin.

“We really haven’t made the fundamental reforms necessary to protect Texans from the ravages of cold weather or hot weather,” he said.

“But make no mistake - this bill is not enough to ensure that we won't have another massive blackout,” State Rep. Jon Rosenthal (D-Cypress) wrote on Twitter. He went on to say the legislation leaves too much discretion to the state’s regulators and the state’s grid operator.

SB 3 requires the Public Utility Commission, or PUC, which regulates ERCOT, to adopt weatherization rules for electric generation, transmission and distribution facilities within six months of the law taking effect.

However, there is no timetable for when those rules would have to be enforced.

On the oil and gas side, a newly created council would have until Jan. 1, 2022, to complete its mapping of the gas chain supply to better plot the distribution of gas during a crisis. However, Texas Railroad Commission (RRC), which regulates fossil fuels in Texas, would be given the authority to determine what would be deemed “critical,” and thus required to weatherize.

Once the council finishes its mapping work, the Railroad Commission would then have six months to adopt rules requiring weatherization.

Again, there is no timetable for when the rules would have to be enforced.

State Rep. Chris Turner (D-Grand Prairie) tried and failed to add an enforcement deadline. His amendment would have mandated that weatherization rules adopted by the PUC and the RRC be enforced within six months of adoption.

“The problem we’re trying to solve here is not going to get solved unless the rules are actually enforced,” Turner said from the House floor.

Critics said the penalties are far too paltry to have the intended effect.

Another lawmaker, Rep. Donna Howard (D-Austin), offered an amendment raising penalties for facilities that don’t winterize and make them mandatory. It, too, failed.

“Without making sure that the monetary penalty on the producers is so tight, and so high that they have no economic choice but to do it, it's going to be another lesson forgotten,” Smith said.

The question of what counts as a critical natural gas facility will be of critical significance.

And leaving it to the Railroad Commission to decide which natural gas facilities should have to spend money to winterize is a significant problem to energy experts. The Commission has long been viewed as overly industry-friendly and more advocate than regulator. The three Railroad commissioners receive much of their campaign contributions from the industry they regulate.

The RRC has largely resisted calls to make weatherization mandatory. Railroad Commission Chair Christi Craddick blamed electricity being cut off at natural gas facilities for production shortages during the winter storm. Craddick in February told lawmakers that electricity is “the best winterization tool” for oil and gas facilities.

Immediately after the storm, oil and gas advocates also argued that they didn’t need to spend money on weatherization. They commissioned a study that found that a lack of electricity to their facilities, not frozen pipes, is what interrupted the gas supply.

Energy experts have pointed out that natural gas stopped flowing when it got cold – and before the power went out across the state.

As it stands now, Texas will likely go through two winters without having regulation in place to require winterization of critical natural gas facilities.

“I think hoping you don't have another cold spell is not a good strategy," said energy expert Doug Lewin, who has been following the legislation closely.

Lewin said rather than waiting for a mapping and rule-making process, a more immediate solution would be to go ahead and winterize wells when they’re being put in, because that’s when the wells are at their most productive.

“You could weatherize every new oil and gas well in the state for between $80 and $200 million” annually, Lewin said.

While that seems like a lot of money, he said, it’s a pittance when balanced against the billions the industry made as a result of the February winter storms.

Over the weekend, House and Senate negotiators also made significant changes to SB 2, the legislation overhauling the ERCOT board. The final version gives politicians a lot more say over who sits on that board. All of the board members will have to live in Texas. None of them will be allowed to have a financial stake in the electricity industry.

Sen. Kelly Hancock (R-North Richland Hills), the author of the bill, said the goal was to eliminate conflicts of interest.

Lewin sees a new problem in the making.

“If implemented this way, it would subject #ERCOT to lots of political interference,” Lewin wrote on Twitter. “What could go wrong?”

After ERCOT set the price cap on electricity at $9,000 a megawatt during the winter storm and natural gas prices soared to unprecedented levels, portions of the natural gas and electric industries went billions of dollars in the red.

Lawmakers approved several measures bailing out those companies. It’ll allow companies to apply for bonds to pay off their winter-related debts. In turn, experts are predicting consumers will be charged $2 to $15 more per month for the next one to 15 years.

ERCOT acts, in essence, as middleman in the electricity market. After the winter storm, some companies could not pay their bills. That meant other companies didn’t get paid for the all the electricity they sold to ERCOT. The loan will allows ERCOT to pay those companies.

It’s important to look at what else didn’t happen.

Nothing significant was to done to improve energy efficiency. Consider that demand during the winter storm was significantly higher than ERCOT's forecast during the February winter storm. Yet, the legislature focused nearly entirely on the supply end of the equation.

And even as lawmakers passed big bailouts for the industry, lawmakers decided against providing direct aid to residents affected by the winter storm.

“The question you have to ask yourself is, ‘Why is it always the consumers that end up picking up the bills?’” Smith asked. “The poor guys pay, and the rich guys get richer.”