ADA ordered animal movement restrictions for four local counties. Hooved animals as well as the humans who come into contact with them are at risk. 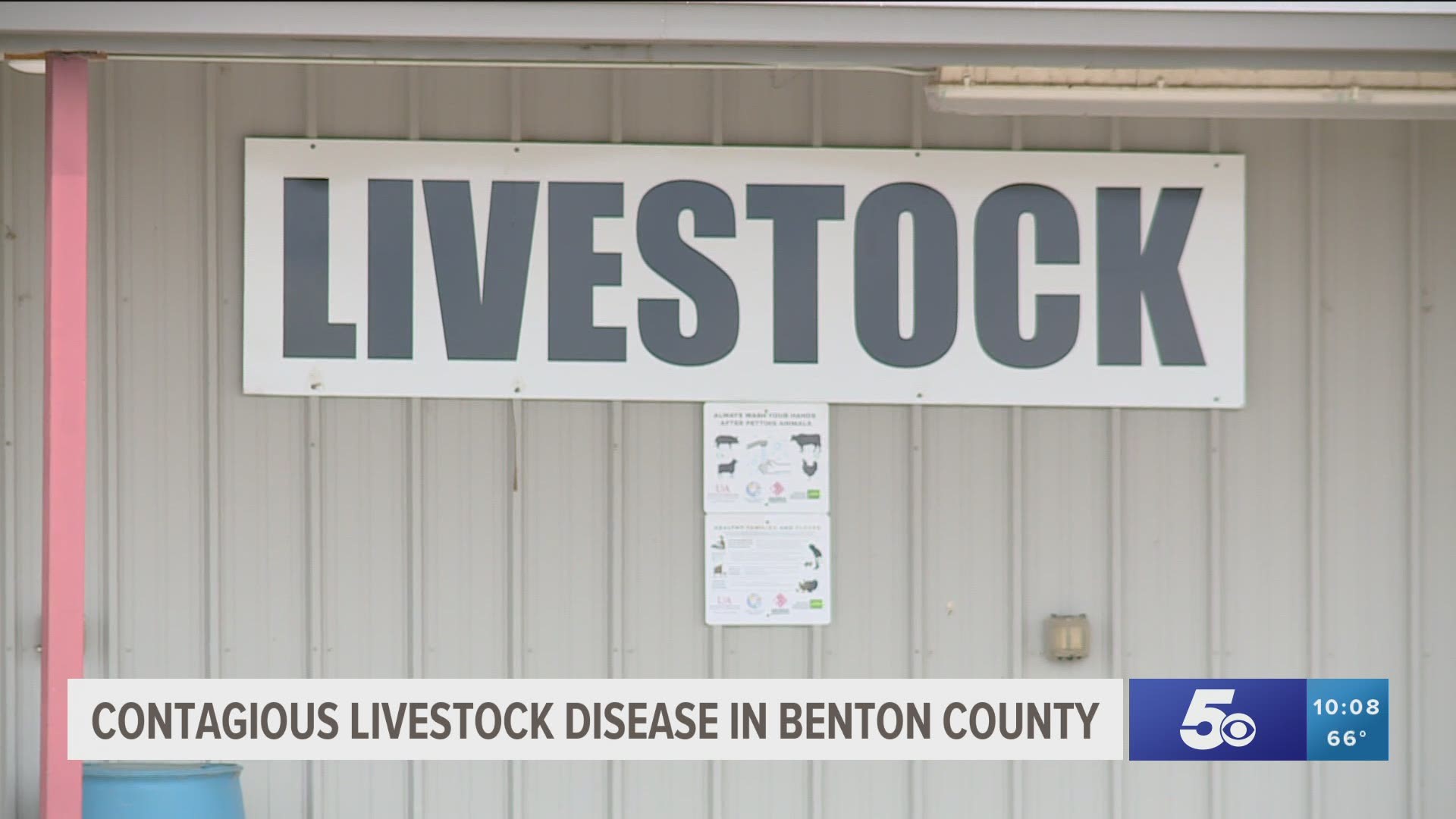 BENTON COUNTY, ARKANSAS, Ark. — The Arkansas Department of Agriculture (ADA) is urging owners of horses and other hooved animals to be on the lookout for a highly contagious virus that was recently confirmed in Benton County.

Cases of Vesicular Stomatitis Virus (VSV) infection have been found in three horses at an equine facility premise in Benton County, Arkansas.

The Arkansas Department of Agriculture implemented movement restrictions for horses in Benton, Carroll, Madison and Washington counties immediately after federal confirmation of the VSV infection on July 27.

In order to transport any equine off the owner’s property, a certificate of inspection must be issued by a veterinarian licensed in Arkansas and accredited by the USDA, not more than five days from the date of travel.

Detailed information about VSV movement restrictions and other VSV information can be found at the Department of Agriculture website.

The department also issued quarantine orders for all animals on the property where VSV was detected, as well as animals on surrounding properties.

VSV is a viral disease affecting horses, cattle, sheep, goats, and swine, and humans are also at risk if they come into contact with an infected animal’s saliva or nasal secretions, according to ADA.

The confirmed VSV infection in Benton County appears to be a strain that predominantly impacts equine.

According to the University of Arkansas System Division of Agriculture, the virus primarily attacks the superficial vessels of the nose, mouth, lips and tongue, causing ruptures and painful sores. This in turn causes an animal to produce an increased amount of saliva, which may be the strongest indicator of infection to an owner or veterinarian. The painful nature of the sores discourages animals from eating, which can lead to further illness.

“Another reason why this is on the radar is that it can infect humans,” Ward said. “People can develop influenza-like symptoms, including fever, muscle aches and headache. It’s zoonotic, so if people suspect infection in their animals, they need to take precautions for themselves by wearing gloves.”

VSV has been identified on 267 premises in eight states since April, 2020.

Equine was the only species affected on 256 of the premises noted, cattle were affected on ten premises and a single premise had both equine and cattle demonstrate lesions.

It is primarily spread among animals through black flies and other biting insects.

The largest and most recent outbreak was in 2015, according to the USDA. “Outbreaks usually occur during the warmer months, often along waterways. The time from exposure to the onset of clinical signs is two to eight days,” according to a fact sheet from the department.

ADA advises that animals be closely monitored and is asking owners to comply with all animal movement restrictions issued in response to the confirmed cases in Benton County.

Heidi Ward, assistant professor and extension livestock veterinarian for the University of Arkansas System Division of Agriculture, said that while VSV poses a potential threat to the state’s beef cattle industry, this particular outbreak in horses is likely due to the fact that horses are moved much more frequently, especially when county fairs and rodeos are in season. For this reason, she said, precautions must be taken when moving animals within Arkansas.

Equine, cattle and other hooved animal owners in Arkansas preparing to transport their animals to other states should check with veterinary authorities in the destination states regarding what, if any, certifications are required.

“Always assume that when you’re handling your horse that everything you touch could be infectious,” Ward said. “If you touch them, make sure you’re wearing protective gear, especially gloves.”

Arkansans who have questions about VSV, or suspect animals on their property may be infected with the virus, should contact the state veterinarian’s office at (479) 823-1733.