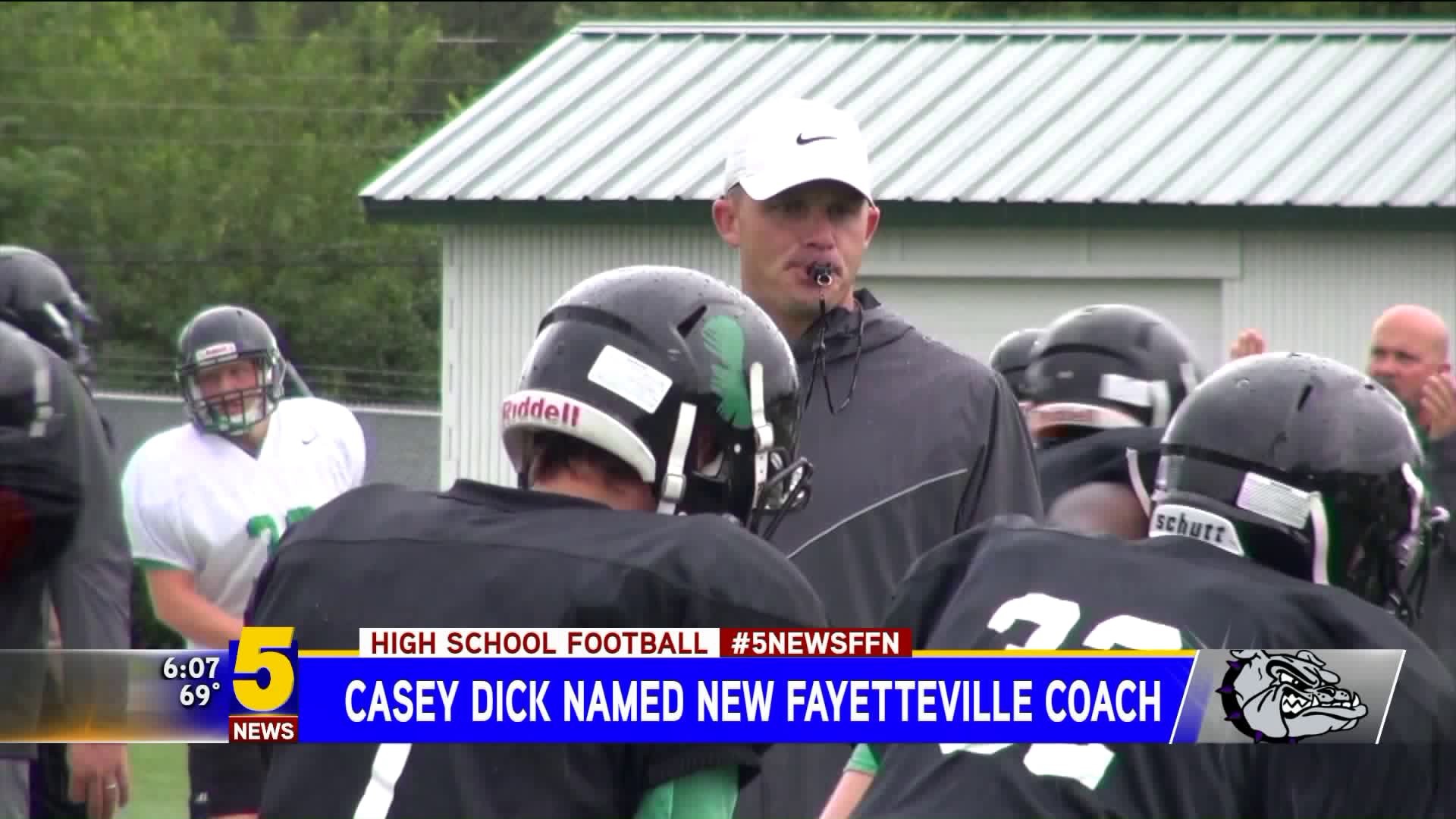 FAYETTEVILLE (KFSM) - He played his college football just up the road from Fayetteville high school and now Casey Dick has been tasked to lead the Bulldogs as he was named the new head coach on Wednesday.

Dick spent the 2018 season as the head coach at Van Buren, his only season with the Pointers, and led them to a 4-7 season and their first playoff berth since 2011. One of those victories came by way of forfeit (Springdale Har-Ber). Fayetteville will hold a school board meeting on Thursday (Apr. 25) and is expected to approve the hire at that meeting.

The move comes after former Fayetteville coach Billy Dawson resigned to join a private business on April 15. Dick will be the fourth different head coach in five seasons for Fayetteville but the Purple Dogs are coming off a nine-win season and return a pair of 1,000-yard receivers (Connor Flannigan & Beau Stuckey) along with a transfer quarterback Quinn McClain who led Elkins to 16 wins in the past two seasons.

“We are happy to welcome Coach Dick home to Fayetteville, this time as our head football coach,” said Dr. John L Colbert, Superintendent of Schools. “We are confident we have selected the right man to lead our football program to even more success for many years to come.”

The former Razorback quarterback got his start in coaching in Northwest Arkansas at Bentonville West as he served as the offensive coordinator for two seasons, the first two years of the programs' existence.

“Coaching the Fayetteville Bulldogs is a dream destination job for me,” said Dick. “My daughter is currently enrolled in Fayetteville Public Schools, and I have been connected to Fayetteville since my time at the University of Arkansas playing for the Razorbacks. I hope to provide stability and affect generations of Fayetteville kids as well as provide a unified culture for all of the Fayetteville community.”

The new Purple Dogs' coach will best be known for his college playing days at Arkansas from 2005-08. Dick threw 5,856 yards and 47 touchdowns with the Razorbacks.

Van Buren must now look for its fourth head coach in the past six seasons with the departure of Dick. The Pointers have struggled in recent years to stay competitive in class 7A and to keep coaches. Dick replaced Greg Werner in 2018 after three seasons while Van Buren went 4-26. Brooks Coatney stepped down at Van Buren in 2014 after five seasons and posted a record of 10-31.