Beginning August 28, doctors in Arkansas will be prohibited from offering patients dilation and evacuation abortions. 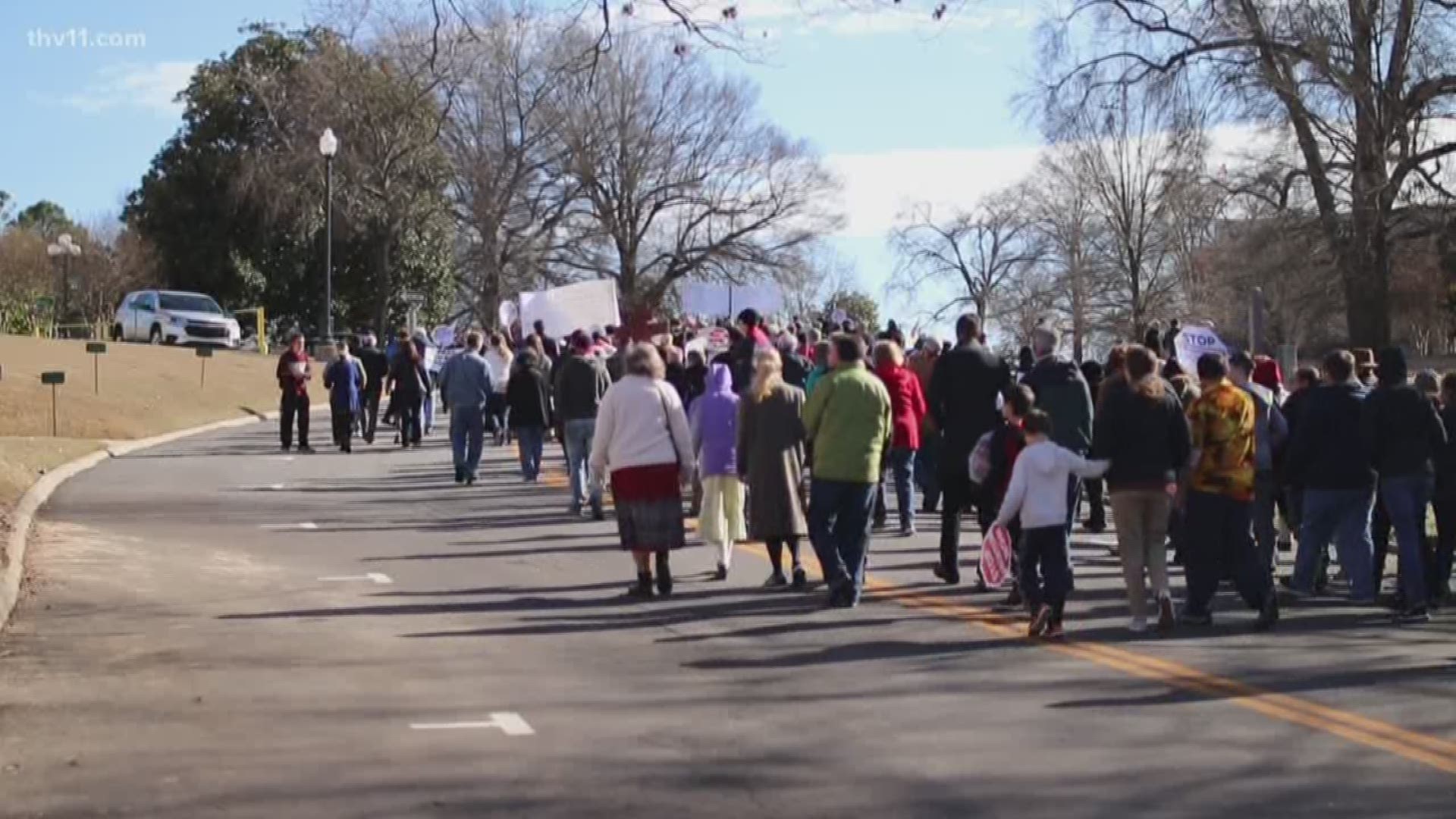 ARKANSAS, USA — Note: The attached video is from a report on the March for Life in January.

A handful of first-of-their-kind abortion regulations can be implemented this month in Arkansas, a federal court ruled Friday afternoon.

The decision could further restrict how patients access the procedure in a state that's been aggressive in legislating abortion.

The restrictions were passed in the state's 2017 legislative session and were subsequently blocked by a district court before they could be implemented.

But on Friday afternoon, the Eighth Circuit Court reversed the lower court's decision, which allows four new abortion regulations to be implemented later this month.

In its decision, the federal court cited the Supreme Court's most recent abortion ruling, which was initially heralded as a win for abortion rights supporters.

Beginning August 28, doctors in Arkansas will be prohibited from offering patients dilation and evacuation abortions.

According to the American College of Obstetricians and Gynecologists, a professional medical group, that is the standard method of termination for patients in their second trimester.

Doctors who violate the ban could face up to six years in prison, a fine up to $10,000, or both, according to state law.

RELATED: 'They're human too': Mother hasn't heard from son in Arkansas prison where 44 inmates tested positive

Three other first-of-their-kind regulations will also be implemented beginning later this month, including one regulation that requires doctors notify local law enforcement when patients under 17 years old seek an abortion.

The regulation expands upon an existing, uncontested state law that requires similar reporting for patients under 14 years old, designed as an effort to identify and thwart sexual abuse.

One of the other new regulations requires physicians to obtain pregnancy-related medical records for their patients to ensure terminations aren't influenced by sex selection.

The fourth new law would force providers to involve family members of the patient in deciding how to dispose of fetal tissue from the abortion.

"I have always advocated for the lives of unborn children and will continue to defend our state's legal right to protect the unborn," Arkansas Attorney General Leslie Rutledge said in a statement responding to the court's decision.

In 2017, the American Civil Liberties Union, its Arkansas chapter and the Center for Reproductive Rights challenged the laws on behalf of one of the state's abortion providers.

The legal coalition said it has not yet decided how it will move the case forward.

"This collection of laws is particularly cruel and coercive," Hillary Schneller, an attorney with the Center for Reproductive Rights, told CBS News in a telephone interview Monday afternoon.

"It will ultimately completely block care for some people."

Though Chief Justice Roberts sided with the court's liberal bloc, he offered his own separate opinion.

In it, he wrote that states do not have to prove that the benefits of an abortion restriction outweigh the burden on a person's ability to access the procedure— it just has to show that it does not present a "substantial" obstacle or burden.

"Nothing about [previous Supreme Court precedent] suggested that a weighing of costs and benefits of an abortion regulation was a job for the courts," Roberts wrote.

That opinion could give state legislators more leeway to implement abortion restrictions. Arkansas Attorney General Rutledge said the suggestion was a "significant shift" in how abortion regulations will be viewed by the courts.

"This is a bit of a silver lining," Rutledge said in a telephone interview with CBS News on Tuesday morning, noting she was "sorely disappointed" by the overall decision.

Moving forward, Rutledge said her office planned to use the Eighth Circuit Court's decision as a "barometer" to judge other upcoming legislation, both in Arkansas and in similarly conservative states across the country.

Arkansas is home to some of the strictest abortion regulations in the country, according to data compiled by the Guttmacher Institute, a research organization that supports abortion rights and tracks regulations that block access to the procedure.

The state is home to three abortion providers, only one of which offers the procedure past 10 weeks into a patient's pregnancy.

Unless in cases of rape or incest, providers are prohibited from performing an abortion after 20 weeks into a patient's pregnancy, the strictest limit on abortion currently allowed by courts to be enforced.

Patients seeking an abortion must undergo a 72-hour waiting period prior to receiving the procedure and are required to receive state-directed counseling.

Earlier this year, the state also attempted to ban abortion amid the coronavirus pandemic, deeming the procedure "non-essential."