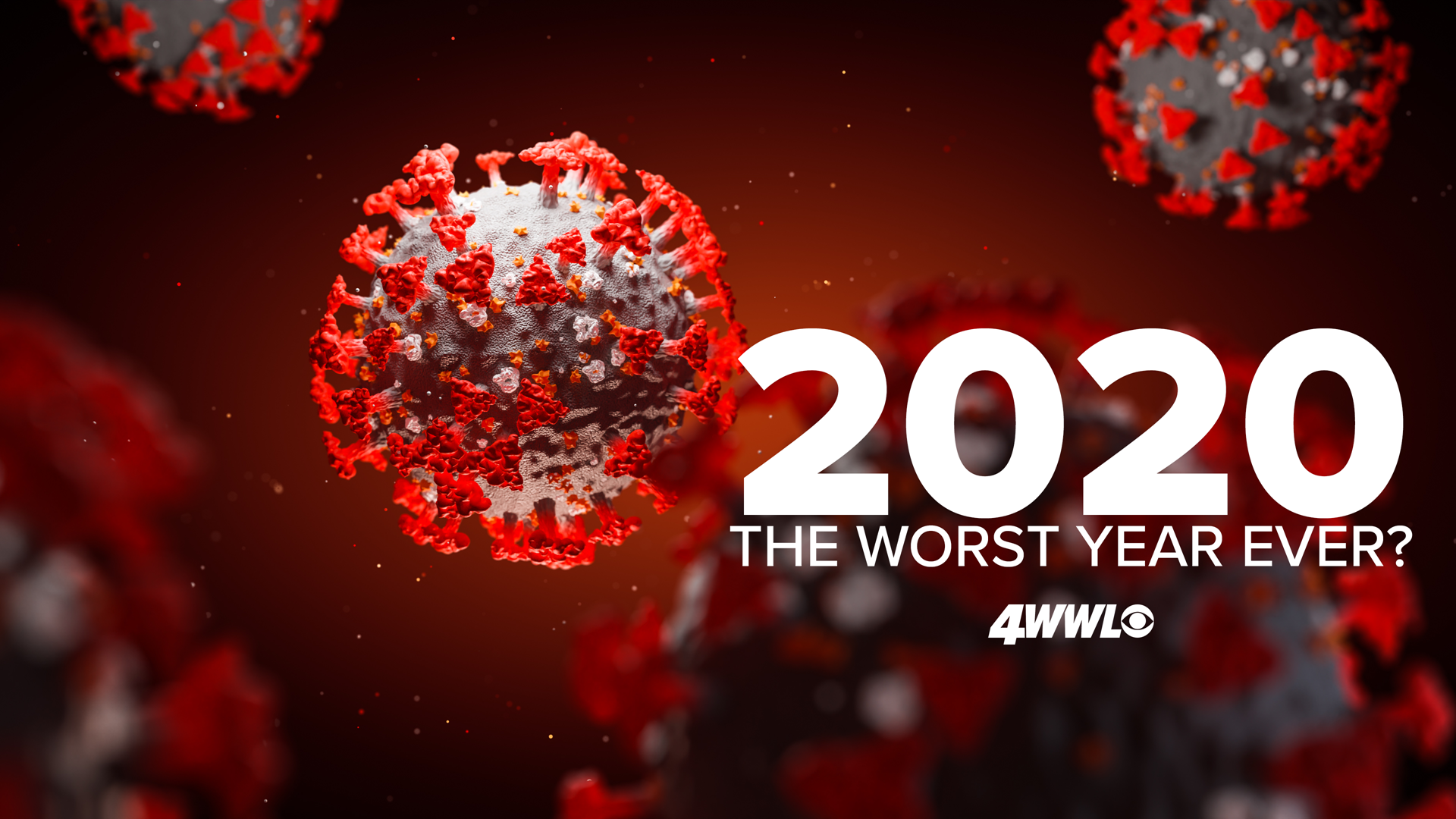 NEW ORLEANS — 2020 started with great fanfare. It was the start of a new decade, a round number, a chance for optimism. When 2020 kicked off with fireworks and unmasked celebrations, little did we know what was to come next.

The year isn’t even over yet – in fact there’s more than 10 percent of it left – and it’s been so bad that people are already working the Gallows’ humor with memes and jokes that try to make us laugh to keep from crying.

COVID was the overwhelming theme and New Orleans was one of the first to experience its wrath. But there was an election that wasn’t the country’s finest hour. There was the social justice movement after the deaths of George Floyd, Breonna Taylor, Ahmad Aubrey and many more.

Hurricanes, more than ever before in recorded history – wildfires in the west.

It all started with COVID

According to John Hopkins, the United States has topped 11 million COVID cases and is nearing 250,000 deaths. Globally, more than 54 million people have been infected and more than a million and a third have died.

But, compare that to the Spanish flu in 1918 when 500 million or a third of the global population got sick and 50 million died, including 675,000 Americans.

Still COVID crushed us. Nations locked down and hoarders stocked up. The lucky were able to work from home.

While essential workers worked around the clock, exhausted.

The Labor Department reported 20.5 million people were suddenly out of work, wiping out a decade of job growth in a single month.

But as bad as it was, the Great Depression was worse. In August of 1932, more than 1 in 4 Americans were out of work.

Unemployment has improved from its nadir in spring and early summer and so is the Dow, the stock market’s benchmark is now at or near a record high after plummeting in March.

It seemed that 2020 was the year of the wildfire – as one after another appeared. The California wildfires destroyed 4 million acres, killed 32 people and incinerated entire neighborhoods. But that’s bigger but not deadlier than the Great Fire of 1910 that killed 85 people and charred 3 million acres across Idaho, Washington and Montana.

Both of those pale in comparison to the recent Australia bush fires that burned 46 million acres, killed millions of animals and 33 people, including 2 American firefighters.

The only deadlier fire there was in 1939, the black Friday bushfire that stretched over 5 million acres and killed 71.

And, if the world wasn’t physically on fire, it seemed to be emotionally.

The deaths of Black Americans at the hands of police sparked protests in the United States and abroad. People compared the turmoil of 2020 to 1968, which is remembered for race riots, the assassinations of Martin Luther King and Robert Kennedy, the Vietnam War, Women’s rights and the sexual revolution.

Even at the top, decorum hit an all-time low.

President Trump and Challenger Joe Biden had a debate marked by interruptions and insults and that bled over to supporters as well.

But, tension bred passion and voter turnout was the highest percentage-wise in 100 years.

It was so close, too close to call at first. Now, President Trump is contesting the loss, something that has only happened twice before.

Back in 1876, amid allegations of voter suppression, the electoral votes of four states, including Louisiana, were disputed. Sam Tilden won the popular vote but ultimately a commission of Supreme Court justices and congressmen named Rutherford B. Hayes president, two days before he was inaugurated in March of the next year.

Al Gore won the popular vote, but ultimately the Supreme Court weighed in and George W. Bush was the electoral winner.

Hurricanes from A to Z and beyond!

We could all use a break, but here, especially because on top of everything else…

The bottom line is in late November, the Gulf is cooling off and so, it appears, are tempers. A promising vaccine is in the works… and 2020, is finally, almost over.

RELATED: US coronavirus hospitalizations hit new record, up 24% in one week