Doctors and nurses at Norton Women's and Children's Hospital encourage vaccines as they continue to treat COVID patients. 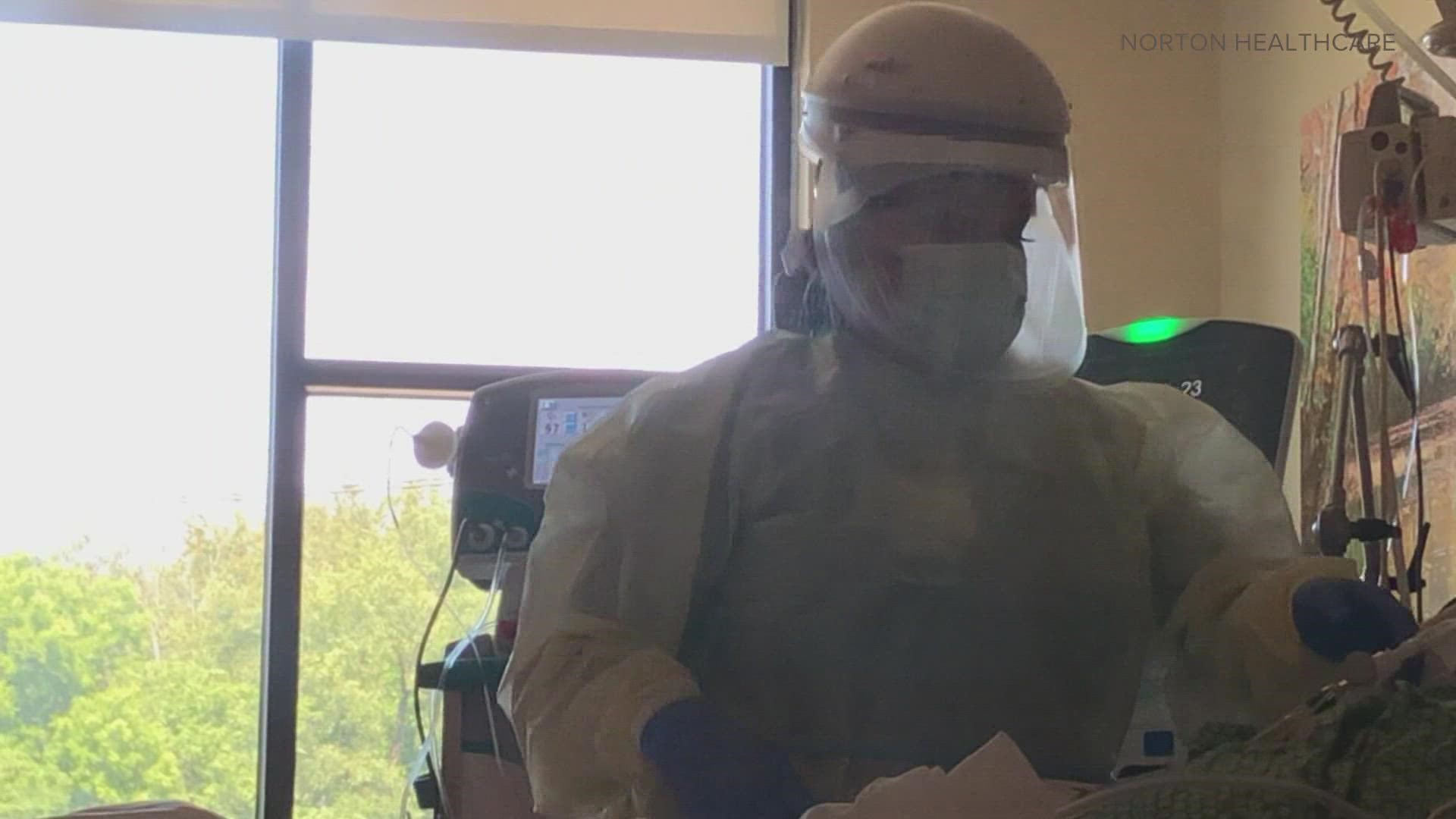 LOUISVILLE, Ky. — It's been called the pandemic of the unvaccinated.

Intensive Care Units (ICU) are filled to the brim. Hospitals are transferring patients to facilities with available beds - if there are any at all. Staff are beyond frustrated.

It's a nationwide crisis and one felt here right in Louisville. Just ask the nurses, physicians and respiratory therapists at Norton Women's and Children's Hospital in St. Matthews.

Joanne Bell, a Registered Nurse, is an 11-year veteran in the ICU.

"I'm 52 years old and I've never seen anything like this in my whole life, let alone in my career. I have never been surrounded by so much death," Bell said. "The patients are younger. The patients are sicker."

Staff is spread thin - everywhere. They're working longer hours and extra shifts and caring for patients who are going from bad to worse in a matter of hours, rather than days.

"Most are on the ventilator, and all over something that could have been prevented by a simple vaccine, wearing your mask," Bell said. "It's very defeating. It hurts. Especially because I know that human life is precious."

Comparing the numbers of the unvaccinated versus vaccinated in the ICU? It doesn't come close. More than 90% haven't received a shot.

"We have had a few patients who have expressed that they wish they would have gotten the vaccine. But by that time, it's too late," Bell said. "It's such a small price to pay, as opposed to being on a ventilator and possibly losing your life."

Few visitors are allowed in the ICU with COVID protocols. Many are only allowed in to say goodbye.

"We become a part of our patients' families, and when they lose a loved one, we lose, we grieve, too. We have to take a few minutes and grieve and then we have to move on because we have more patients who are waiting for our care," Bell said.

Dr. Deep Ajmani is a Hospitalist and 16-year veteran with Norton Women's and Children's. He's currently the medical director over the Hospitalist Group.

We caught up with Dr. Ajmani on his 13th straight day at the hospital.

"Our census blew up, and we had so many patients at that time that the regular staff physicians were overwhelmed. So, I came on my off day to help them out," he said.

"The hospitals are full. The beds are full, we have literally no ICU beds at this point, we are actually transferring people where we can get a bed," Dr. Ajmani said. "We get calls every day from outlying hospitals because they have no beds anywhere, and they are calling us to transfer their patients to us.

"We don't have beds either. That's the problem. So, it's just a bad situation that we have patients who need ICU services for other reasons, not just COVID. And now we can't serve those people because our system is overwhelmed with the COVID population at this point."

He's watched as the average age of his patient population has gone from the mid-60s and 70s a year ago, to their early 50's in recent days.

"We have these young folks who think that they are superheroes and they'll be fine, they work out, they're healthy, and they can beat this, but I've seen young people in their 20s and 30s on a ventilator," Dr. Ajmani said. "You may have somebody who has absolutely no symptoms. And somebody who's just dying."

He said families of some of his most critical patients still argue against the vaccine.

"They argue with us still that this disease is unreal, that vaccine is, is something that's going to, you know, track you down. It makes no sense," Dr. Ajmani said.

He's understood few cases where people were hesitant to get vaccinated, including a recent patient, in her mid-20s, who was about 32 weeks pregnant. The vaccine was only just approved for pregnant women in the last month.

"She was on a ventilator and had to have an emergency C-section for the baby. Eventually, she got better, you know, after a week of being on a ventilator she got extubated. Her husband was also in his 20s," Dr. Ajmani said. "I talked to the husband bedside, and I asked him, 'Did you get the vaccine?' He says, 'No.' I asked him, 'Why? You've seen your wife almost die. Your baby almost died. What's holding you back?' And he just said, 'I'm reluctant still to get the vaccine.' It made no sense."

The husband later said he was considering the vaccine.

"I get this argument over time that the vaccine is experimental and it doesn't work or it's going to track you," Dr. Ajmani said. "Somehow, they feel that the vaccine may alter their genetic system. That's not true."

The reality is, the drugs used to treat COVID are more experimental than the vaccine, and might only work for half the patients. Meanwhile, the vaccine's effectiveness in preventing COVID, or significantly reducing the severity of its symptoms, is above 90 percent.

"We've been using these drugs, I would say for over a year now, and I can tell you truly, there is no guarantee that they work. It works in some patients. It doesn't work in some patients," Dr. Ajmani said. "So why get sick and try an experimental drug, when you can get a vaccine that actually does work?"

Trip Bardgett is a Registered Nurse in the ICU. He transferred there right as the pandemic hit a year and a half ago.

"The last few months, nothing compares to what we've experienced and seen," he said. "It's sad. It's stressful. You take it home with you. You try not to."

Bardgett says self-care for employees is just as important as the care they provide to their patients.

"Sometimes you just have to take a moment to kind of collect yourself, and, and just kind of motivate yourself to go back and keep going. Do it again," Bardgett said.

The numbers in his ICU, like most across the state, are overflowing with COVID patients.

Monday, Gov. Andy Beshear said 69% of the state’s hospitals are desperate in their staffing numbers. He said medical facilities are doing what they can to keep things moving including cutting elective surgeries and turning operating room beds into more beds for the ICU. The state has roughly 400 National Guard members across various hospitals statewide supporting staff in need.

"It's nonstop right now. We are full to the brim with sicker patients than most these nurses have ever taken care of," Bardgett said. "You develop relationships with the patients, their families. We take care of these patients for weeks at a time and often, we're their families, or we may be the only visitor they have."

Bardgett said it's hard to watch when there's nothing more staff can do, other than to provide comfort care during their final hours.

"They're gasping for breath and they're begging for you to help them," he said. "We try. I mean we give them every treatment that we have and sometimes, they just don't work."

Hayle Stroupe, is a Respiratory Therapist in the ICU. She transferred onto the floor just days after graduation, months into the pandemic.

"Our patients that we're seeing now are way sicker than they were in the beginning," Stroupe said. "There have been moments that I have left the ICU room crying after we've had something happen, and it's, it's because we're caregivers. We care."

"You're seeing the people that you are getting ready to intubate call their loved ones for the, for the last time, maybe, to say I love you, before they get intubated. And you know at that moment, the odds are stacked against them on the ventilator," Stroupe said.

"I have personally held the hands of dying patients and have wiped the tears from people's face as I tell them that, we're going to have to intubate you, because they're terrified. They know that they're probably not going to come off the ventilator."

For those that do come off the vent, it's not an easy recovery.

"You're seeing people go into multi-system organ failure from COVID and being on the ventilator, so it's definitely not going back to normal like they think it's going to. It's having a bigger effect on everybody," Stroupe said.

Everyone has a case they'll never forget. For Stroupe, there are many.

"I have the names and the images of all my patients I have lost since the beginning of COVID burned in my brain. I remember what bed they're in and I remember what they look like when they passed, and what they looked like before and it never gets easier. And you know, you just want those people to be able to make it off the ventilator so when we do have success. When we do have people that make it off the ventilator, it's a celebration, because it's not very often that that happens."