Woman Speaks Out After Armed Grandson Barricades Himself Inside Greenwood Home 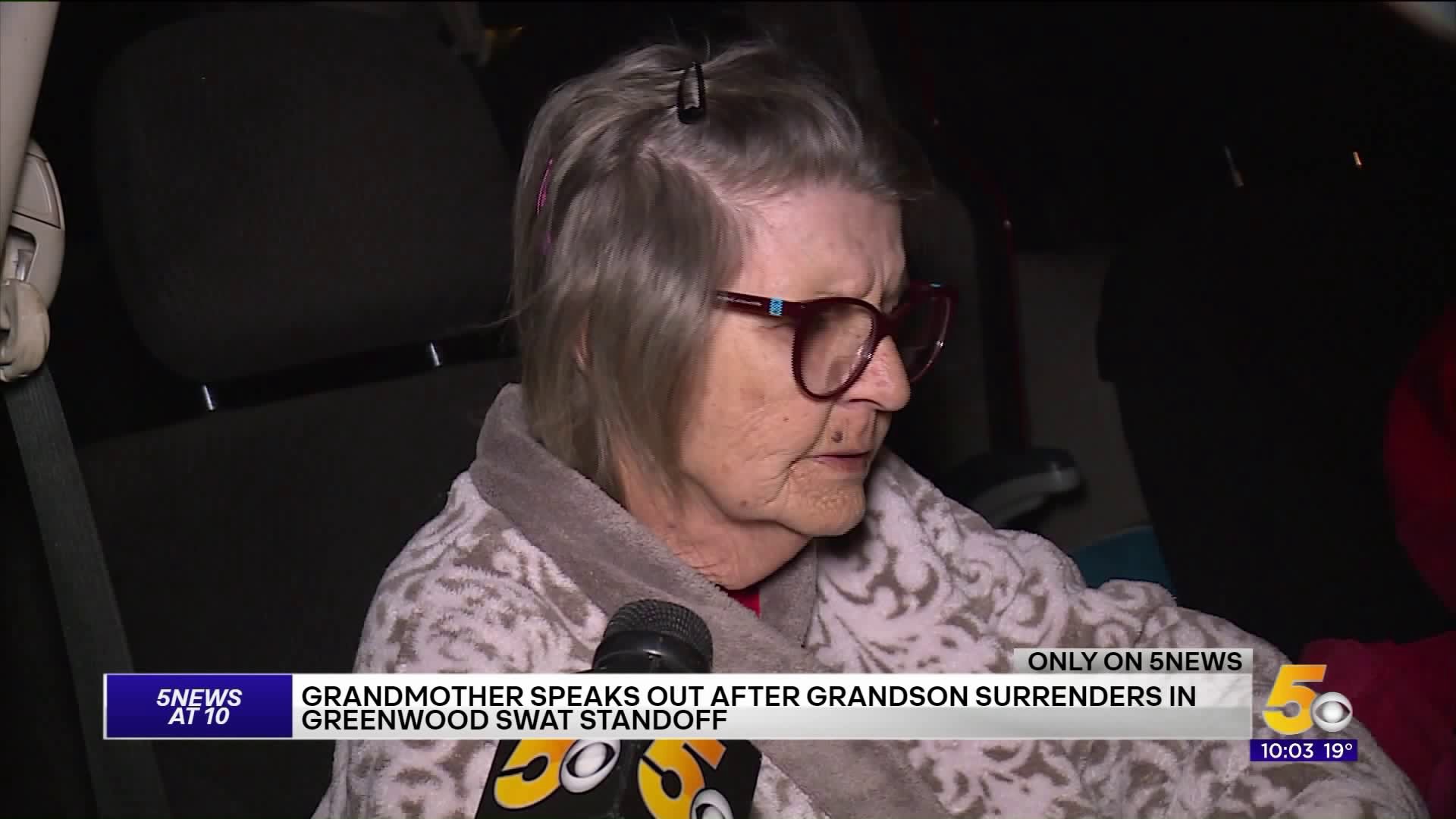 GREENWOOD, Ark. (KFSM) — The Greenwood Police Department advised the school district to cancel bus routes Tuesday (Nov. 12) afternoon to certain areas due to a barricaded armed man in the neighborhood.

The situation happened off of West Atlanta Street. Several police cars, armor trucks with SWAT officers and an incident command center truck were on scene.

According to Greenwood Police Chief William Dawson, Zelda Karr called 911 because her grandson, Josh Pugh, was waving a gun around and fired shots into the air. Police served a warrant for aggravated assault with a deadly weapon to the home.

Karr told 5NEWS that she woke up from her nap to see her grandson waving a gun around in the air. Scared for her life, she says she walked four blocks down the street to her daughter's home to escape the situation.

"I went to lay down and I heard this God awful noise. I mean bad noise. And I go ‘what is that’ and I come out of the, my room to check it out and he’s standing at the end of the hallway and he’s got a gun," Karr said.

She immediately left the home.

"Four blocks to my other daughters. Which I’m surprised I made it. I didn’t think I was gonna make it," Karr said.

When she arrived the family called 911, saying Pugh was not in a good mental state and had a gun.

Karr says her grandson was angry over an issue involving his girlfriend and children.

“I knew he wouldn’t hurt me, intentionally by any means. Because he loves his granny I know he does,” Karr said.

Police had the Greenwood School District cancel bus routes to the Indian Hills and Greenwood West areas as armed deputies responded to the barricaded man.

“I was very afraid. Very very afraid. Both of us were. Our hearts were just in our throats thinking please let it end good, he’s our boy," Karr said. "Thank God the tear gas did it. I would have died, it would have been bad, I could not have stood it.”

Dawson says this isn't Pugh's first run-in with the law.

“He is a convicted felon so he will have felon possession firearm charge, as well as aggravated assault warrant was served," Dawson said. “Unfortunately today did not work out well. But maybe he’ll get some help because that’s what he needs.”

Pugh is being held in the Sebastian County Jail.

Neighbor Danielle Newman had to pick her children up from Greenwood school after being notified that the buses would not run.

“I was at home cleaning and I got a call from the school around 3 that the buses 16 and 24 would not be running off of Indian Hills and the west side of Denver and I tried calling the school the line was busy. I couldn’t get ahold of them. And then someone was walking up the street telling people to stay out of the area,” Newman said.

Woman Speaks Out After Armed Grandson Barricades Himself Inside Greenwood Home