LITTLE ROCK, Ark. (KFSM) — Governor Asa Hutchinson has announced his support for the Trump Administration’s ban on certain flavored e-cigarettes and the d... 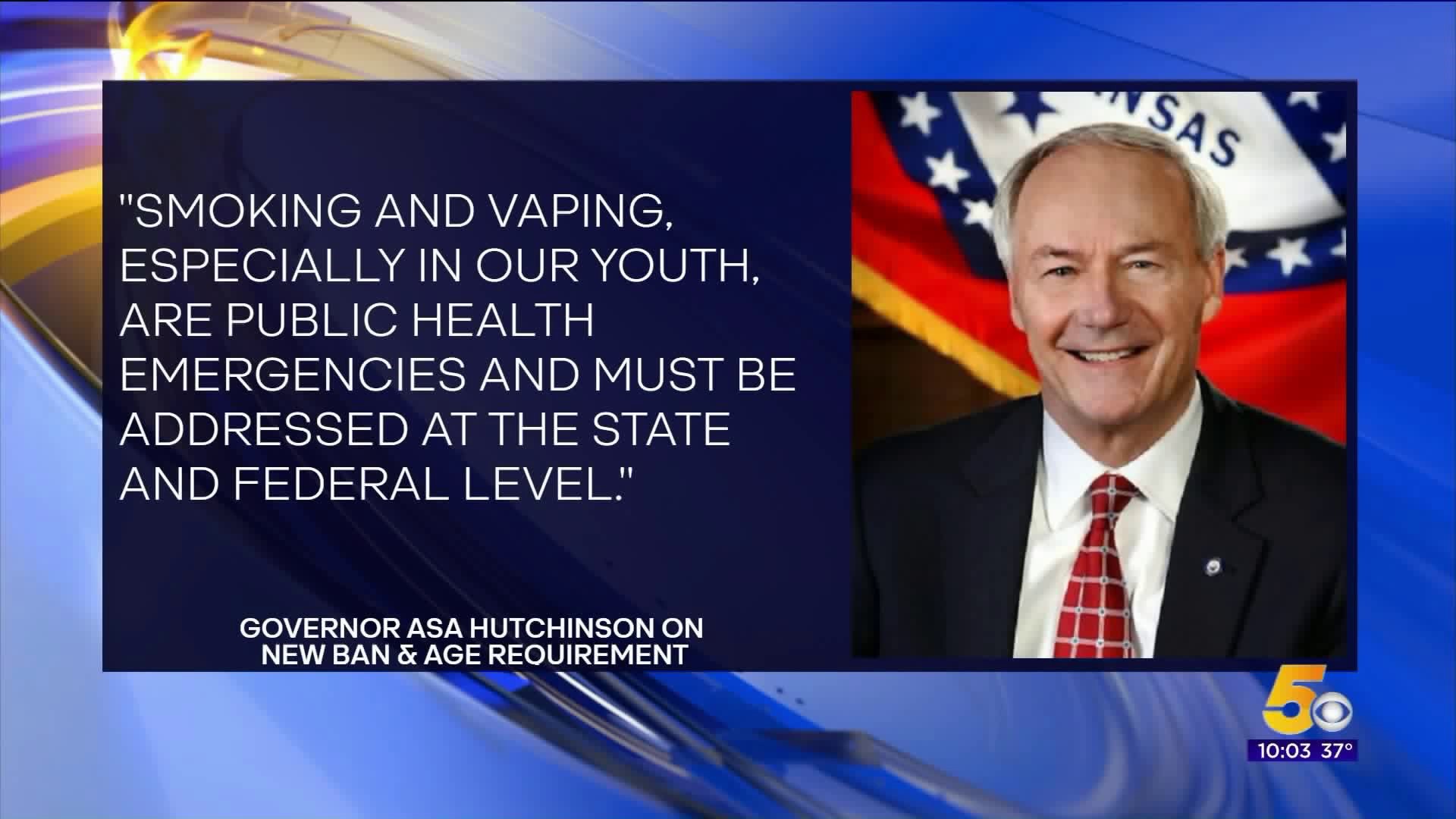 LITTLE ROCK, Ark. (KFSM) — Governor Asa Hutchinson has announced his support for the Trump Administration's ban on certain flavored e-cigarettes and the decision to increase the minimum age to 21 to purchase tobacco products.

On Jan. 2, 2020, the FDA finalized its enforcement policy on flavored cartridge-based and e-cigarette ban commonly used by children. Companies must cease the manufacture, distribution, and sale of these products within 30 days or face FDA enforcement action.

“The federal law recently signed by President Trump, which increases the minimum age of sale of tobacco to 21, coupled with the recent decision to ban certain flavored e-cigarettes are steps in the right direction toward curbing the vaping epidemic among our nation’s youth. Smoking and vaping, especially in our youth, are public health emergencies and must be addressed at the state and federal level. In Arkansas, I signed Act 580 during the 2019 legislative session to gradually increase the age limit to 21 in the state. The just-passed federal law supersedes the gradual T-21 provision of Arkansas law, and I have directed Tobacco Control to advise all retailers and the public that the minimum age to buy tobacco products is now 21.”

“The Food and Drug Administration’s (FDA) action this week to enforce regulation on the manufacture and distribution of most flavored cartridge-based e-cigarettes is a good step forward in protecting our children from the harmful effects of vaping and nicotine addiction. Together with the recently signed legislation raising the minimum age for sale of tobacco products to 21, we are now in a better position to safeguard children in Arkansas from the dangers of tobacco. FDA has also committed to carefully monitoring trends in e-cigarette use and taking additional regulatory actions as needed. I am confident that Governor Hutchinson’s leadership and commitment to enforcing all tobacco-related laws in Arkansas will help us to reverse the alarming trend we have seen in youth vaping.”

“We will continue to work with the retail industry to ensure proper understanding of the new T-21 age requirement. I have tasked all of our enforcement agents with communicating the changes with permitted locations as they continue to conduct compliance checks. We also plan to increase the number of merchant education seminars offered so that permit holders will have convenient access to an in-person training session.”