FORT SMITH, Ark. (KFSM) — A former Fort Smith 911 dispatcher accused of mishandling a call with a drowning woman has been cleared of wrongdoing following an int... 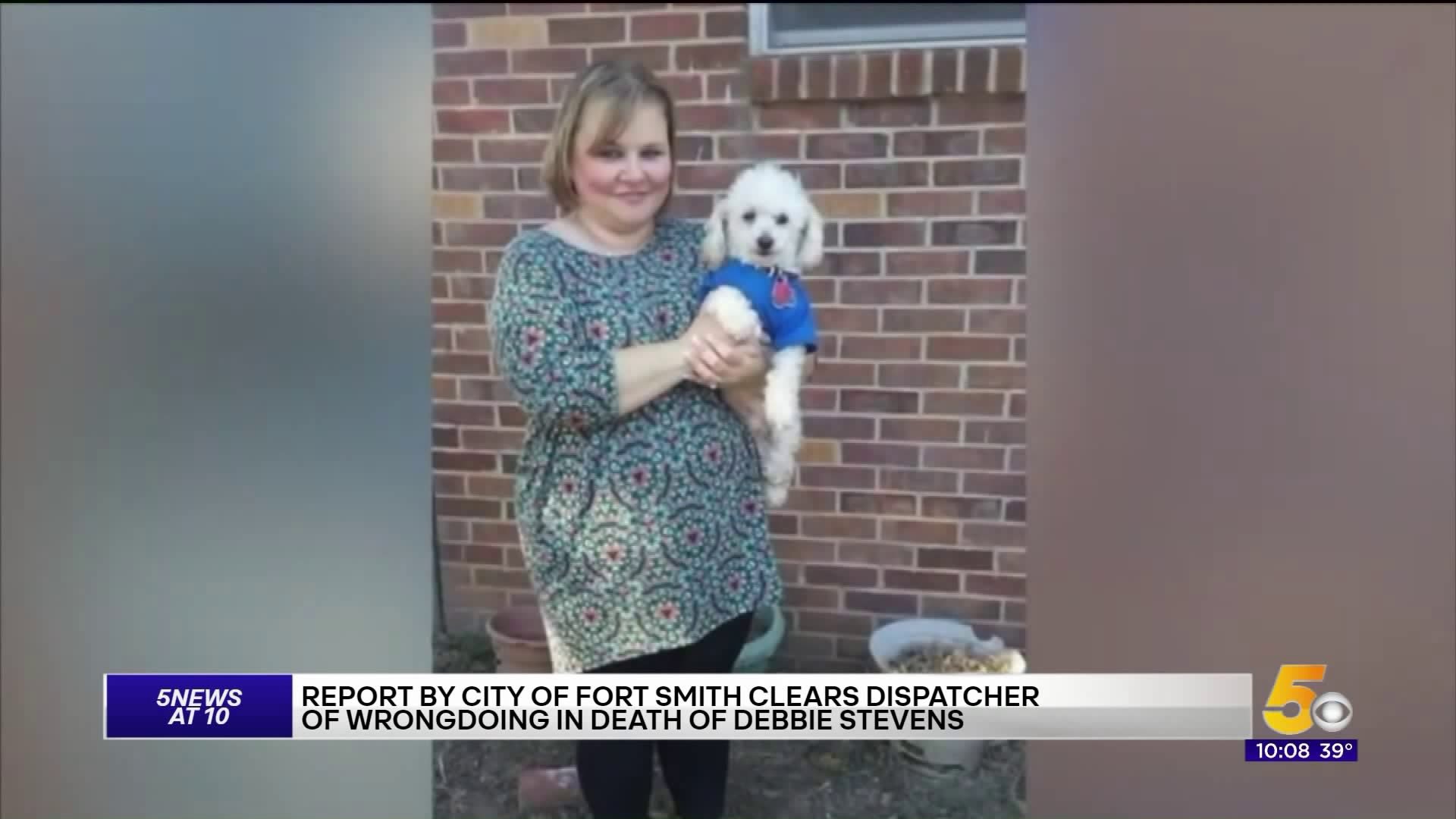 FORT SMITH, Ark. (KFSM) — A former Fort Smith 911 dispatcher accused of mishandling a call with a drowning woman has been cleared of wrongdoing following an internal investigation.

The investigation was conducted by the Fort Smith Police Department and Fire Department.

Reports state that though operator Donna Reneau may have violated policy by being rude to  Debbie Stevens at times, she had done nothing that would have warranted her termination had she still been employed with the Fort Smith Police Department.

Stevens died after her car was swept away by flash flooding on Kinkead Avenue while delivering papers on Aug. 24. Stevens called 911 before her death, and Reneau answered her call.

Stevens was the 15th call due to vehicles in floodwaters that morning, and 19 other calls were made following hers.

A report of the night states that the 911 center was staffed with four operators and was overwhelmed with calls during the flash flooding and the situation was described as "chaotic, at best."

At the beginning of the call, Reneau was not able to establish Stevens' location. Reneau put in a police call for Stevens with the call type “stalled vehicle” but changed the priority from the standard level of 6 to a higher priority of 4. Records indicate that there were no officers available at the time.

Reneau also put in a fire call, dispatching Ladder 1 on a water rescue call. Ladder 1 got caught in flooding at Greenwood and North O while responding to the call. Records state that while turning the truck around, firefighters rescued someone else who was stranded in floodwaters. As they proceeded back to the route, they were informed that Pumper 7 took over the call and responded.

According to a report from FSPD, an officer on scene stripped his duty gear off and was ready to enter the current tied to a rope to get to Stevens, but was unable to due to the speed and volume of the water.

In recordings released to the public, Reneau was heard telling Stevens, "this will teach you next time don't drive in the water...how you didn't see it, you had to go right over it." She was also heard in the call telling Stevens to "shut up."

Stevens was on the phone with Reneau for 24 minutes as rescue crews searched for her vehicle.

Police and first responders arrived on the scene around 4:50 a.m. but because it was dark, heavily flooded with swift water and with multiple vehicles in the water, they were unable to get to Stevens.

Once the fire department arrived on the scene, they were able to get to Stevens but she was already deceased.

According to the FSPD report, Stevens called her mother-in-law before calling 911 to come and get her but didn’t understand why she couldn’t. Stevens’ cousin Christina Rabbitt told police that Stevens had health issues early in life that caused her to have the maturity level of a teenager.

Reneau put in her two weeks notice before Stevens' drowning, and the call came in during her last shift.

An exit interview with Donna Reneau was released.

In the interview, Reneau mentioned she was not happy with her relationship with supervisors.

When asked, "What did you like most about your job?" Reneau said, "The ability to help people in a time of an emergency."

Chief Danny Baker released a statement on November 21, 2019, stating the need for better supervision in the 911 center.

Baker went on to talk about how dispatchers should react with callers in emergency situations.

"One common point of criticism in this situation has been that Operator Reneau did not give instructions to Ms. Stevens. Telecommunicators are cautioned not to commit to any services that are not certain, as it creates a specific duty to protect. For example, training guidelines instruct telecommunicators not to give an estimated time of arrival unless they are sure of it, or to tell a caller that help is on the way unless they are certain the responding unit is nearby and on the way to the scene. Likewise, a telecommunicator in the 911 center cannot see the area around the caller, has not been trained in medical or rescue operations, and has no certified basis on which to give advice to the caller regarding specific actions to take. To do so exposes the department and the city to significant civil liability. Advice can be limited to general topics such as telling the caller to try to get to a safe space if they are in danger, or to stay on the line so that the operator can keep the caller's location updated on the mapping system."

According to an internal investigation of the 911 communication center, a tactic often used by dispatchers is to take a stern, commanding tone or to even raise their voice with "hysterical" callers. While the recordings show Reneau did use these tactics properly, she did, however, make several statements that passed "beyond the need to take control of the conversation."

Those statements would qualify as a violation if Reneau were still an employee of the City of Fort Smith. If she had been found guilty of the violation, it would not have lead to her being fired.

During the investigation, Reneau admitted she felt bad for how she treated Stevens.

Weeks after the controversy surrounding Reneau, another Fort Smith woman came forward, saying she had a similar experience with a Fort Smith 911 dispatcher during the same flooding.

According to the 911 center's internal investigation, on March 3, 2014, Reneau received a commendation after a person wrote about her "professionalism and her ability to calm" them after they were involved in an accident.

On November 19, 2014, Reneau received another commendation for recognizing subtle cues from a store clerk who called because an attempted kidnap victim was hiding behind the counter and the male suspect was still in the store. The internal investigation report says that her recognition allowed officers to arrive quickly and take the suspect into custody, potentially saving the victim's life.

In December of 2014, Reneau was again commended for maintaining her calmness and trying different tactics while speaking with a suicidal male who was cursing at her during the entire call.

Since the accident, the Fort Smith Fire Department and EMS have helped the review boards interview for dispatch positions. 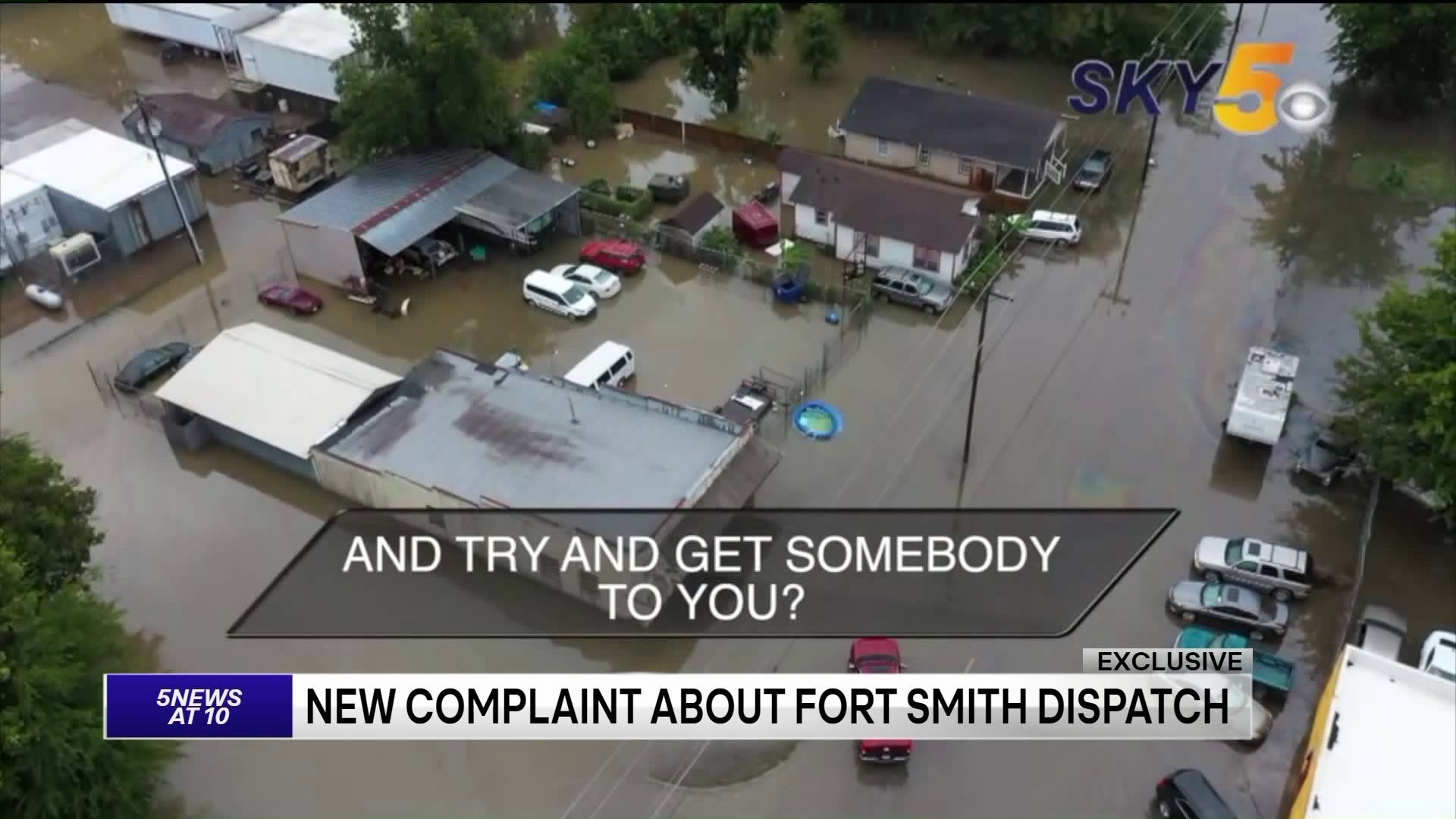 A joint memorial service was held Saturday, September 21, in Fort Smith for Debbie Stevens and her deceased mother, Nancy, who passed just weeks after Debbie's death.

5NEWS will continue to update this developing story.