Arkansas police tackle naked woman after leading them on chase

A dash cam video shows a naked suspect jumping out of a stolen vehicle following a police chase. 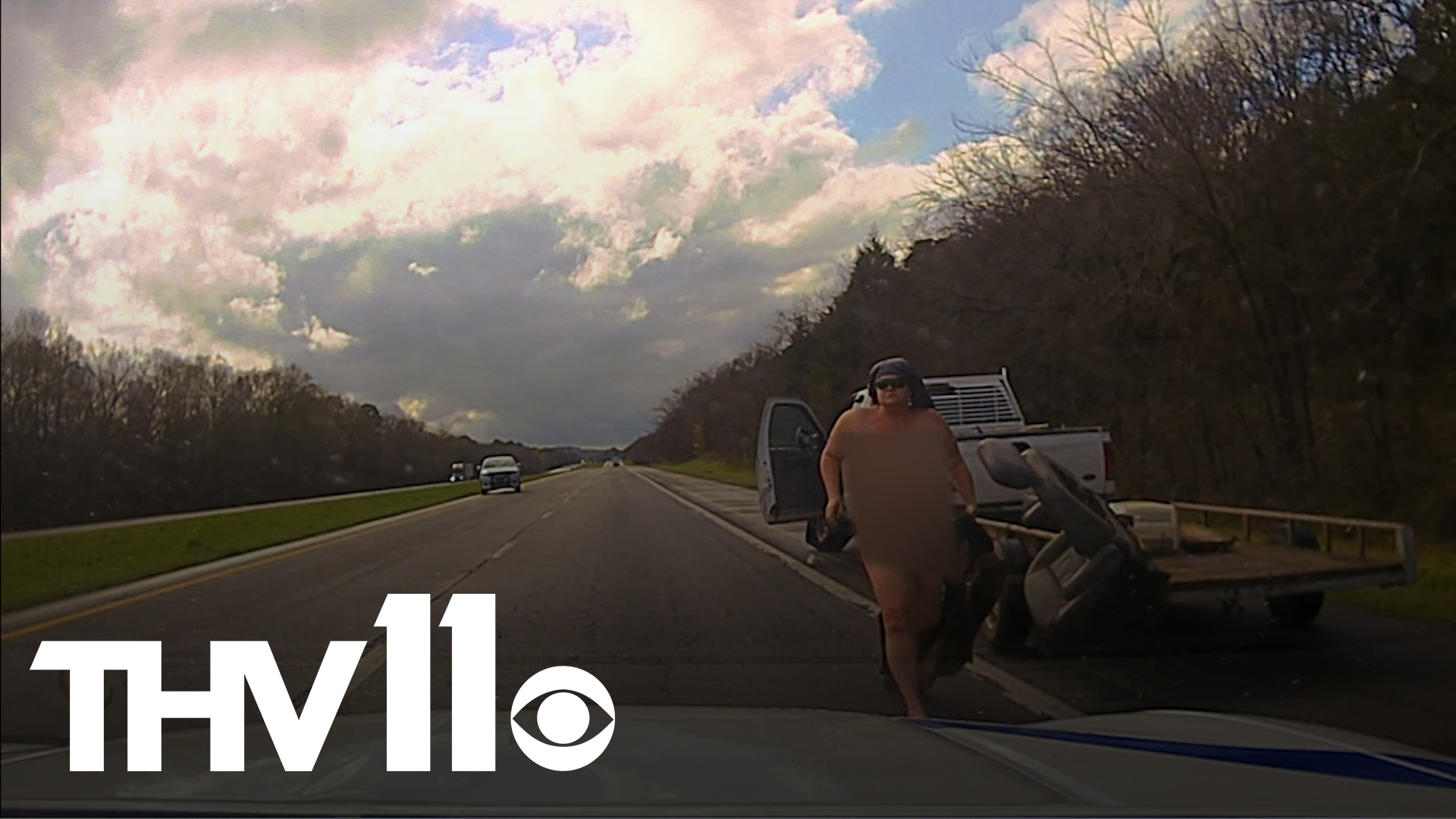 LAMAR, Ark. — On Thursday March 25 around 4:14 p.m., Officer Jimmy Harmon with the Lamar Police Department, reported a white Ford pickup pulling a trailer was stolen in the city of Lamar.

Officer Harman said the truck nearly hit him head on, and he lost sight of it due to property falling out the trailer in front of him.

Arkansas State Police Officer Lonnie Moore proceeded to I-40 and attempted to locate the truck.

Johnson County Dispatch said that the victim of the stolen vehicle called 911 and said there were several loaded guns in the vehicle at the time it was taken.

At 4:22 p.m. Moore observed a white Ford truck pulling a trailer passing westbound. As he caught up to the truck, he observed that this was the vehicle that was just reported stolen.

Moore attempted to make a traffic stop, but the driver refused to pull over, so he advised dispatch of a pursuit.

A Johnson County unit took lead initially for a few miles before passing the vehicle and getting a few hundred feet ahead.

Clarksville police also attempted to spike the vehicle, but were unsuccessful.

The pursuit continued westbound at speeds mostly around 70 miles an hour, and Moore said it appeared the suspect had attempted to shake the contents of the trailer out during the pursuit.

Dispatch said a Coal Hill police unit also set up with spike strips, and as officers and the suspect approached them, the suspect swerved into the fast lane to avoid the spikes.

The suspect's swerving caused the trailer to lose some of its cargo and the truck continued for two more miles before it lost its tire, leaving the driver to pull to the north shoulder.

As seen in the dash cam video obtained by the Arkansas State Police, the suspect is seen jumping out of the vehicle naked and attempting to flee the scene before being tackled by police.

She was taken into custody without further issues and later identified as a resident of Lamar. She was transported to the Johnson County Detention Center, and Lamar police say they are filing charges for the theft of the vehicle and trailer.

Officer Moore with the Arkansas State Police said he will also be filing charges for the felony fleeing, reckless driving, and refusal to submit to arrest.

Police located a loaded revolver in the front driver seat of the stolen truck, and the owner of the vehicle was contacted.