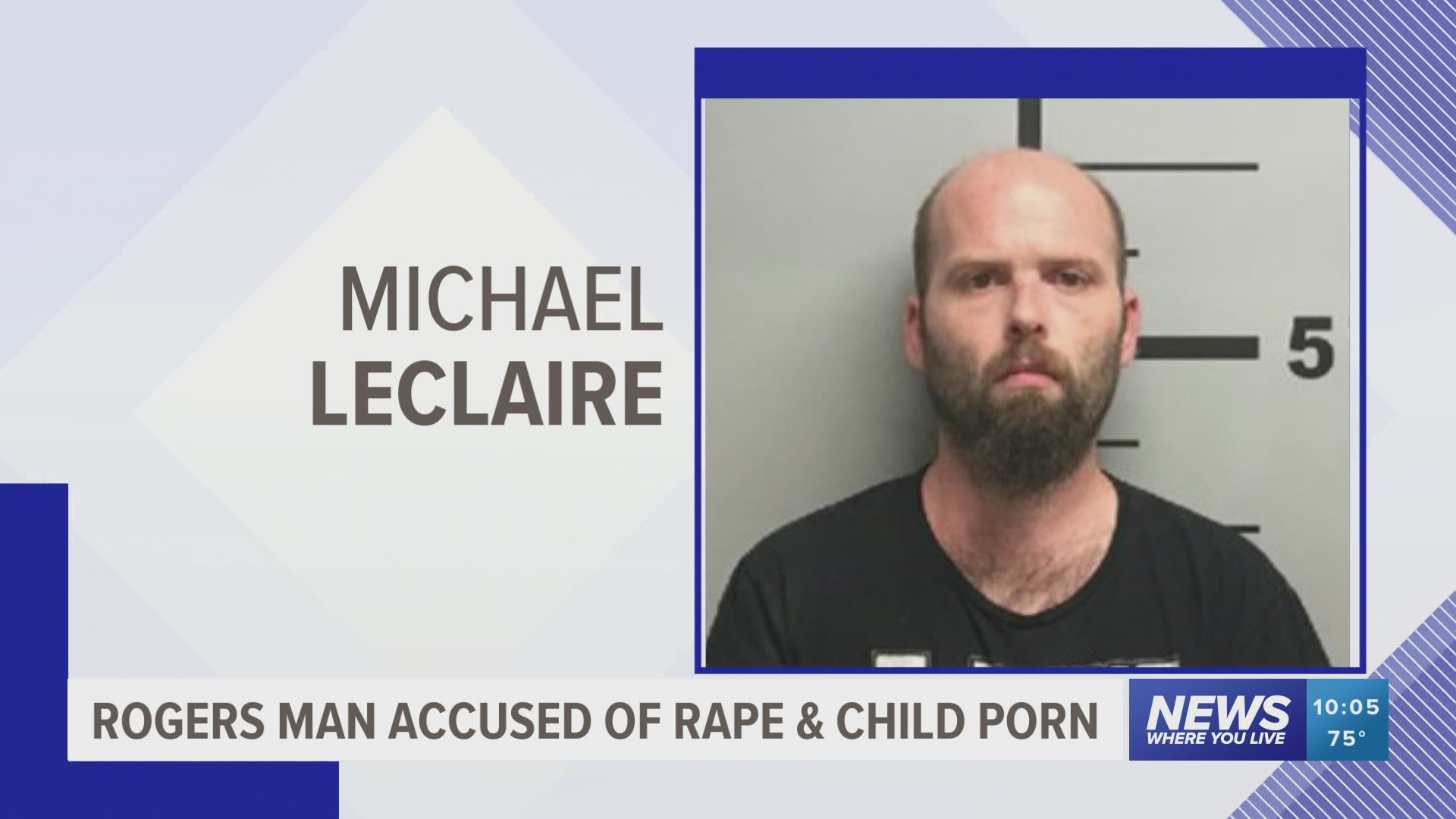 BENTONVILLE, Ark. — A Rogers man has been arrested on several charges including rape and child pornography.

On July 2, 2020, the Rogers Police Department received a cyber tip from the Arkansas State Police - Internet Crimes Against Children Taskforce about a Snapchat containing a nude image of a girl believed to be between the ages of 12 and 14.

It was discovered that the person who uploaded the Snapchat was 33 years old, and later identified as Michael (Mike) LeClaire of Rogers, according to a probable cause affidavit.

Rogers Police received another tip on July 14, 2020, that Instagram reported an image that contained apparent child pornography on June 19, 2020, that came from a user named Mike.

Investigators met with LeClaire at a residence in Rogers on July 22, 2020, and he agreed to speak with them. He told investigators that his Snapchat and phone number were no longer activated.

When asked about the Snapchat image, LeClaire told investigators he did not know anything about the image they described. He initially told them that he was trading images of nude females with another person over Snapchat, but he did not believe any of them were young.

When asked about his Instagram account, LeClaire told investigators he had not used it since February or March of 2020.

While being questioned, LeClaire allowed investigators to view images on his phone. While scrolling through the photos investigators found several images of nude females, some of which appeared to be teenagers, according to the affidavit.

The affidavit states LeClaire told investigators there may be some images of underage females on his phone and he went on to say that the images were on his Google account. He also stated that he has had the same Google account since he was a teenager and that some of the images had been there since then.

During the interview, LeClaire said that he in fact does look at and share images of females around the age of 14. He told investigators "I like them young," and that he liked young girls that were "developed."

When asked about the pornographic Instagram video depicting a child around five years old, LeClaire initially told investigators he "kinda" remembered the video. Later in the interview, investigators asked him if he only had the video for "trading purposes" and he replied that was true, according to the affidavit.

The affidavit states that LeClaire said if he downloaded the video then it was only used for trading. He also stated that he had since stopped talking to those people he was trading images with.

When LeClaire realized investigators were seizing his cell phone he then told them that they would find nude images of females between the ages of 14 and 15. He told investigators that he stopped talking to people who would send him videos or images of underage females.

On July 23, 2020, investigators received a search warrant for LeClaire's cell phone and found over 150 videos with Child Sexual Abuse Material (CSAM). According to the affidavit, one of the videos showed a man, who appeared to be LeClaire, engaging in sexual acts with a child between the ages of one and three.

The affidavit states that other videos LeClaire recorded showed him raping and sexually assaulting children under the age of five.

While searching the Rogers home LeClaire was staying at, officers found a Paw Patrol pillow that appeared in one of the videos on his phone. It was then discovered that LeClaire had assaulted a young family member.

LeClaire was arrested and while in custody he told police that he had been charged with a sexual offence when he was 12-year-old and his victim at the time was possibly 3-years-old.

It was discovered that LeClaire had been arrested in Texas for Indecency with a Child/Sexual Contact in 2001 and Aggravated Sexual Assault of a Child in 2002. He was also arrested in Rogers in 2019 for Failure to Appear and Third-Degree Domestic Battery.