Former Glynn County police officer Ricky Minshew, who has since left the force, testified for much of Monday. 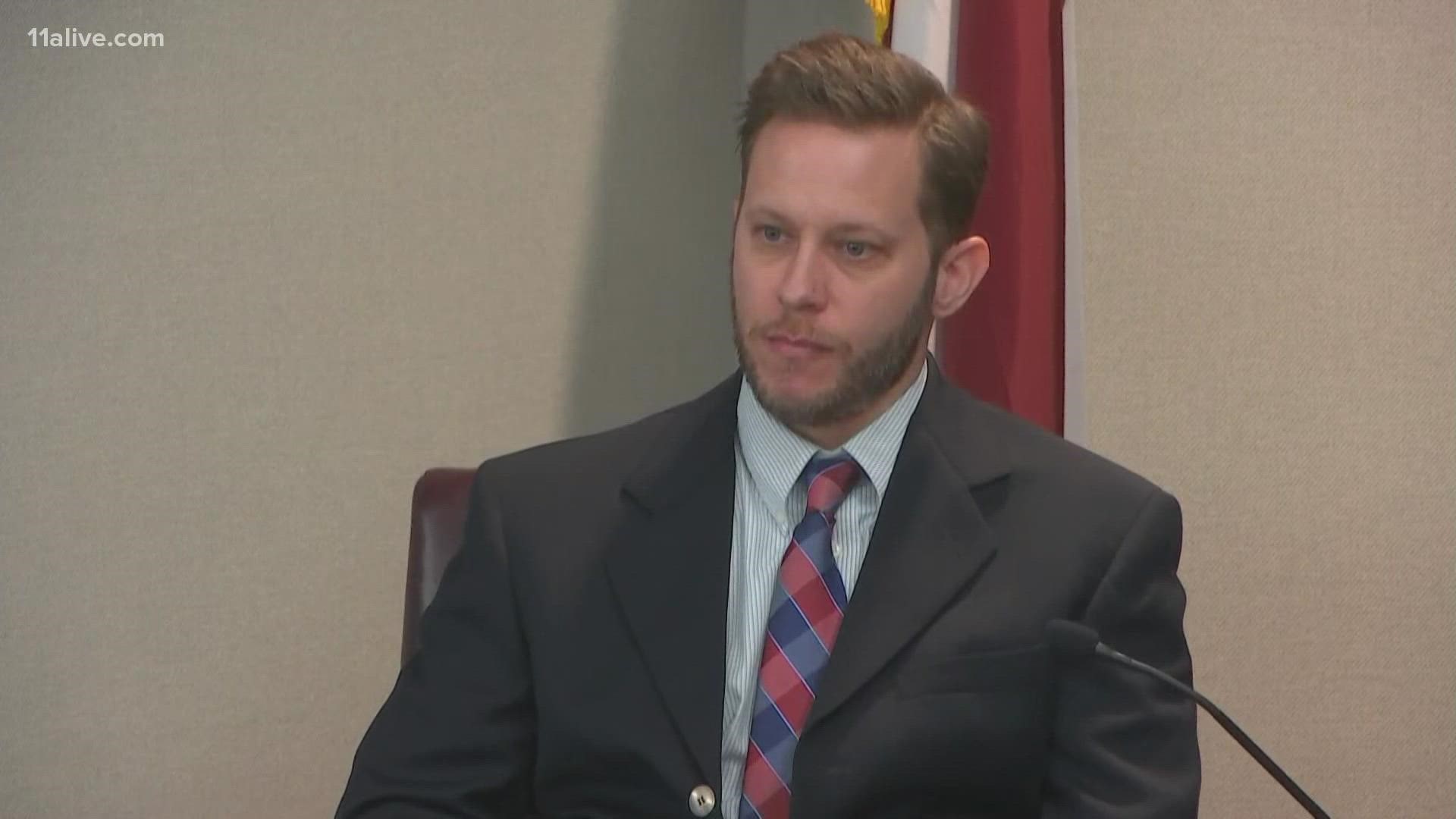 GLYNN COUNTY, Ga. — The first officer on scene the day Ahmaud Arbery was shot and killed gave his testimony on Monday, the second-day testimony was heard in the murder trial against three men accused in Arbery's death.

Former Glynn County police officer Ricky Minshew, who has since left the force, mostly recounted his initial impressions on arriving to find Arbery dead in the middle of a road in the Satilla Shores neighborhood of Brunswick and later his conversations with one of the men facing charges, William "Roddie" Bryan.

Bryan is charged alongside father and son Greg McMichael and Travis McMichael, who initiated the chase of Arbery on Feb. 23, 2020 - with Travis ultimately shooting him. Bryan is accused of joining in the chase and helping entrap Arbery in the situation that ended in his death.

Prosecutors focused in on statements made by Bryan to Minshew, that they indicated support their argument that he committed an aggravated assault with his pickup truck in the pursuit of Arbery, qualifying him for the felony murder charge even though he did not shoot Arbery (via the commission of a felony leading to death).

Minshew testified, reading off a transcript, that Bryan had told him he "pulled out of my driveway, was gonna try to block him in, but he was going all around it. I made a few moves at him, you know, and he didn't stop."

Minshew also said Bryan told him, "The black guy, like I said, went up on towards the (fire truck) but, I think somehow or another, changed his mind and he cut back through this way and I think I blocked him again or something over there."

Later, the former officer testified Bryan told him, "Should I have been chasing him? I don't know."

At one point, prosecutors asked him if Bryan ever told him he was "trying to arrest" Arbery for any kind of crime — such as criminal trespass, or burglary. The prosecutor asked if Bryan ever told the officer whether he "told Ahmaud Arbery that he was under arrest for anything?"

"No, ma'am," Minshew responded both times.

A supposed citizen's arrest attempt, under a now-repealed Georgia law, is at the heart of the defense for the McMichaels. It's not clear if Bryan's counsel — who deferred an opening statement until after the state closes its case under a little-used legal rule — plan to use that defense as heavily.

Bryan's attorney, questioning Minshew, focused on disputing the former officer's characterization of Bryan's statements and the seeming lack of attention paid to Bryan immediately after the incident.

"Roddie Bryan never told you he tried to run over Mr. Arbery with his truck?" Minshew was asked.

"Never told you he tried to hit Mr. Arbery with his truck?"

"If he told you he assaulted Mr. Arbery with his pickup truck you would not have sent him home with his truck?"

Bryan's attorney also pressed Minshew on the fact that Bryan was never detained, and on the supposed number of times he "blocked" Arbery from running away. Prosecutors in their opening statement indicated they would argue Bryan committed assault by attempting to hit Arbery and blocking him from running around the neighborhood — instead of directing him back toward the McMichaels, where he ultimately was shot.

Bryan's attorney ended by asking Minshew that his client "never expressed any intention to you on his part to injure Mr. Arbery in any way?"

Under cross-examination from Travis McMichael's attorney, in one poignant moment, Minshew was asked if he arrived on a "fairly traumatic scene" in the moments after Arbery's death.

"I would suspect that any person with a soul or a heart would be in shock," he responded, before later saying he could not know Travis McMichael's mindset at the moment.

Glynn County Patrol Officer Adam Jackson testified next. Jackson, who is still employed with the police department, said he responded to the scene after Minshew's reports of "shots fired."  The prosecution primarily asked Jackson about what happened when he arrived on the scene.

Jackson testified that he was tasked with speaking to witnesses and people who lived in the area. One resident told him he had a camera connected to his home nearby and handed Jackson a jump drive with surveillance video on it.

The jury was asked to leave the room as Jackson confirmed that the bodycam video shown was of him speaking to the resident; the officer had not yet reviewed his own bodycam video from the day of Arbery's killing. Jackson also said he was not the person who was ordered to look over the video from the jump drive.

Earlier in the day, Glynn County Police Department investigator Sheila Ramos, who documented much of the crime scene the day of Arbery's death, testified. 11Alive's Sister Station First Coast News reported that some jurors seemed to "squirm in their seats" as Ramos detailed photos - some of them very graphic depictions of Arbery's body.

Arbery's mother, Wanda Cooper-Jones, was said to "exhale quietly" as detailed pictures of his gunshot wounds were shown.