BENTONVILLE, Ark. (KFSM) — A Chinese National student was arrested for theft by deception for his involvement in a nationwide multi-million dollar Walmart gift ... 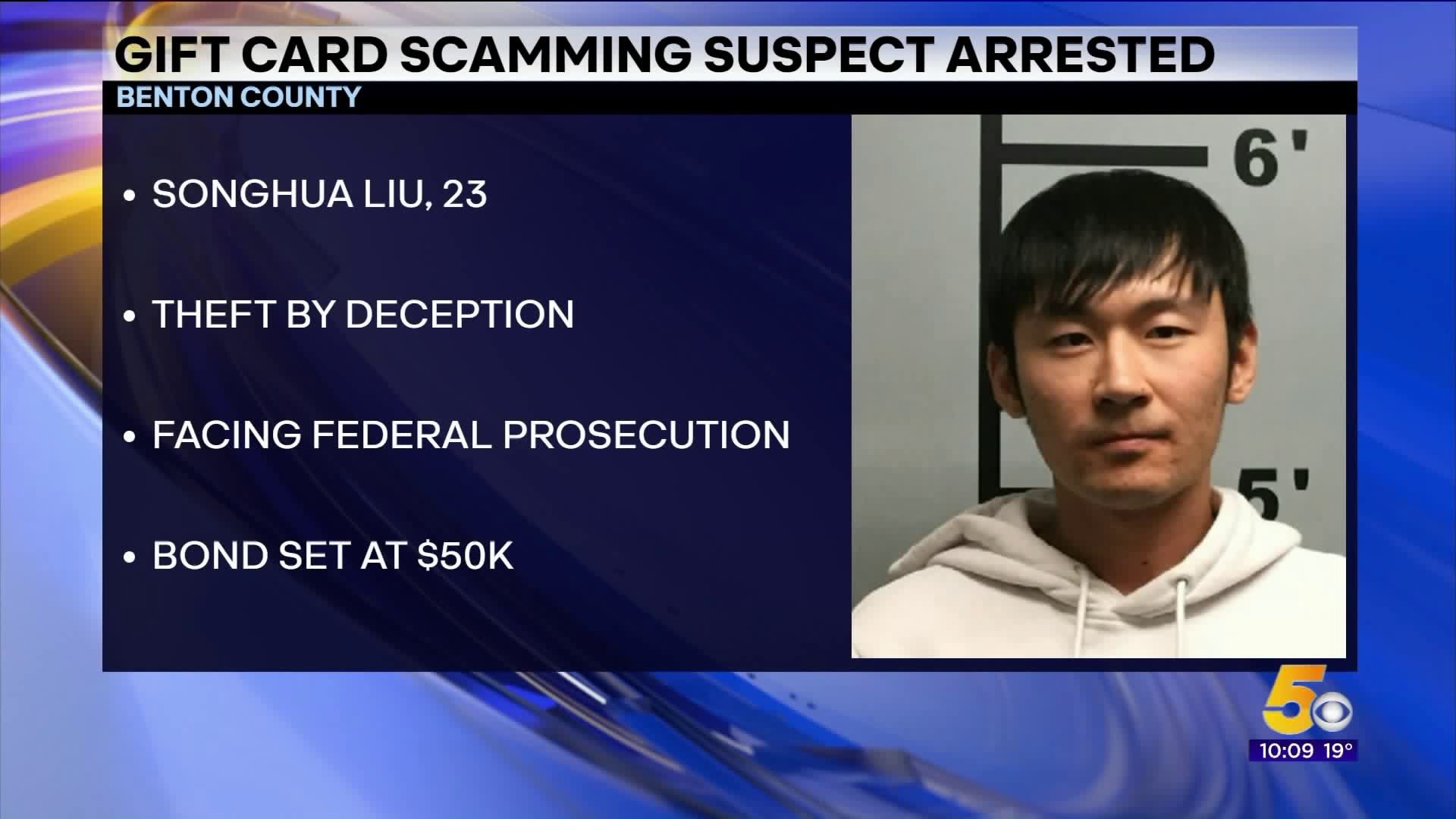 BENTONVILLE, Ark. (KFSM) — A Chinese National student was arrested for theft by deception for his involvement in a nationwide multi-million dollar Walmart gift card scam.

On Nov. 4, 2019, the Benton County Sheriff's Office - Criminal Investigations Divison was contacted by a Walmart Global Investigator about an on-going theft investigation involving a variety of phone and internet scams.

Walmart Global Investigators had been surveilling a person of interest, 23-year-old Songhua Liu, for the last several hours as he traveled through the state of Arkansas.

Based on the suspect's pattern of activity, investigators believed Liu would be in possession/control of fraudulently obtained gift card numbers at a Walmart store in Benton County.

It was believed Liu was involved in a scam designed to convince, coerce, trick, or otherwise prompt a victim to buy Walmart gift cards.

Once a gift card(s) is purchased, the victim is instructed to send pictures of the gift card number. Card numbers are disseminated around the country within a few hours.

A "runner" receives the gift card numbers from others who obtained them directly from the victim(s). Runners utilize their smartphones, gift card information is collected in the form of a UPC.

The UPC is scanned by the runner at a Walmart register, and he/she liquidates the Walmart gift cards by purchasing prepaid debit cards or other gift cards.

The runner then takes pictures of the prepaid debit cards and gift cards. Photos are sent to others involved in the scheme, who cash in all those cards.

Investigators believe Chinese Nationals are often used as the runners.

Victims are lured into the scheme by either responding to a text message, responding to an email, or searching for a particular type of financial service online, inputting basic info (name, phone), where a scammer will contact them, presumably from a fraudulent website.

Walmart Global Investigators were able to backtrack where the gift cards were initially purchased (usually in different states) using receipts and provide law enforcement with the names of each victim and credit card information used to buy the cards.

Still-shots from registers of suspects were also provided to investigators.

Liu was trailed as he traveled from Fort Smith to Fayetteville. Investigators noted he stopped at several Walmart stores near I-49.

Each time Liu stopped, investigators were able to confirm gift card transactions linked to the fraud scheme were completed.

On Monday (Nov. 4), Liu completed a little over $16k in gift card transactions, according to court documents.

Investigators believed Liu's transaction activity to be between $500k to $1,000,000 in the last month.

Liu was just one runner in the scheme, leading investigators to believe he is part of a multi-million-dollar fraud scam.

Police were informed Liu was staying at a hotel in Fayetteville for the night. He was seen leaving the next morning (Nov. 5) around 9:30 a.m.

After leaving the hotel, Liu visited at least five Walmart stores between Fayetteville and Rogers, completing transactions ranging from $1,000 to $3,200 at a time.

At approximately 4:22 p.m., Liu arrived at a Walmart in Rogers. Investigators waited inside the store and watched Liu enter the store on the grocery side, near self-checkout registers.

Liu grabbed gift cards from a display near the registers. He walked through the store and selected a red gift bag before entering the self-checkout area.

Investigators watched Liu scanned what appeared to be a UPC on his device before scanning multiple gift cards, exactly as described by Walmart Investigators.

After completing the transactions, Liu attempted to leave the store. Detectives approached him and escorted him outside.

President and CEO of the Arkansas Division of the Better Business Bureau Janet Robb says this is a common tactic by scammers.

“These individuals are out gathering up gift card numbers to use just like this young man in Northwest Arkansas did recently and used it to go to Walmart use those points to buy other gift cards it's all part of a scam,” Robb said.

Liu was handcuffed, and the bag full of gift cards was confiscated, and his phone was put on airplane mode.

It was confirmed that Liu had completed a transaction totaling $1,408.82 at the store.

Liu was placed under arrest for theft by deception and transported to the Benton County Detention Center to be held for a bond hearing.

He will face federal prosecution for his involvement in the fraud scheme.

Liu is a Chinese National in the United States on a student visa.

Records show he resides in Amherst, Massachusetts, and was in the country to attend the University of Massachusetts.

He confirmed visiting numerous stores in the state and completing gift card transactions.

Robb says finding the person behind these scams is almost impossible with thousands happening across the country each day.

“This was an isolated incident in Northwest Arkansas good for them, we finally caught a bad guy but there are hundreds that get away with it for everyone that is apprehended,” Robb said.

Robb advises consumers to take their time and do research before relaying information over the phone to avoid becoming a victim to scams.

Investigators say victims are lured into this scheme by putting basic contact information into websites, then a scammer will reach out, tricking the victims into purchasing gift cards one way or another.

Corporal Tyler Underwood says the West Fork Police Department has seen an increase in complaints about scam calls recently, he says take the time to make sure the person on the other line is legitimate before handing out personal information or money.

“If they want taxes or your grandson is in jail surely somebody else in your family would know about it as well to confirm before giving any money out,” Underwood said.