(KFSM) — All four representatives from Arkansas voted No to two articles of impeachment against President Donald Trump Wednesday (Dec. 18). Each of the four Ark... 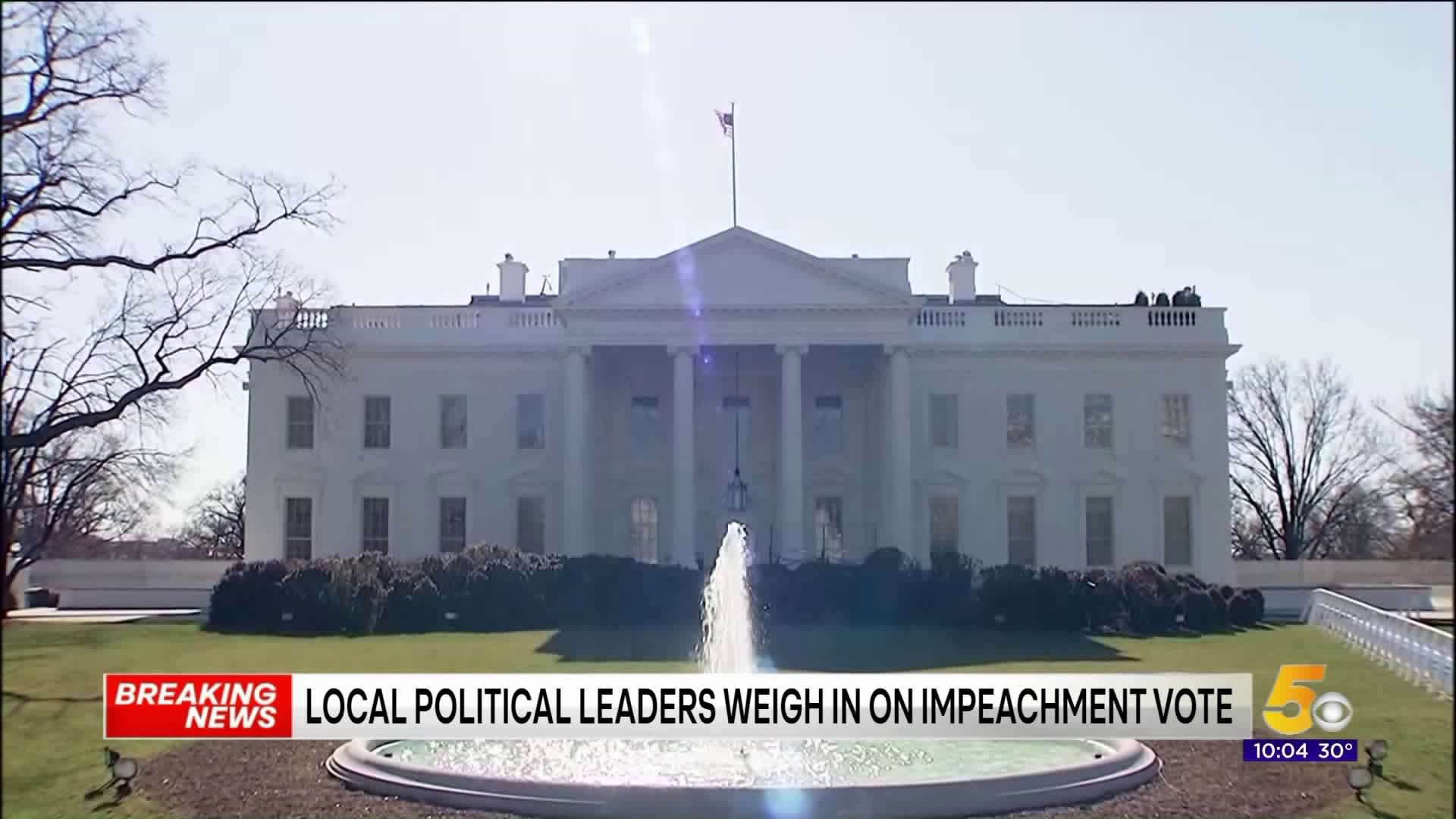 (KFSM) — All four representatives from Arkansas voted No to two articles of impeachment against President Donald Trump Wednesday (Dec. 18).

Each of the four Arkansas Congressmen, French Hill, Steve Womack, Rick Crawford and Bruce Westerman cast their votes against the impeachment.

Following the release of votes for both articles of impeachment chairman Michael John Gray with the Democratic Party of Arkansas shared this statement saying in part:

“The U.S. House of Representatives found evidence to move forward with an indictment of President Trump, with a trial to follow in the U.S. Senate... if there has been any form of abuse of power or obstruction it is a direct violation of the constitution and must be addressed.”

Looking ahead now, a trial will be held in the Senate on whether or not to remove President Trump from office. Senator John Boozman and Senator Tom Cotton will have their turn to weigh in during the trial.

The Young Democrats of the University of Arkansas President released this statement to 5NEWS about the next steps saying:

“If a Democratic president had abused their power or obstructed Congress in a similar fashion, the UA Democrats would support their impeachment as well. We fervently urge Senators Tom Cotton and John Boozman to weigh the evidence against the president and vote to convict.”

President Donald Trump responded to the impeachment vote on Twitter with a photo of himself with the statement, "In reality they're not after me they're after you, I'm just in the way."

Below are statements released from Arkansas lawmakers.

“This is the day Democrats have been planning since the American people duly elected President Trump. Over the past few months, the Judiciary and Intelligence Committees have neglected legislative work and instead spent taxpayer dollars handpicking witnesses and hearing secondhand testimony. Adam Schiff’s closed-door hearings allowed him to selectively leak information that fit his narrative. Judiciary Committee’s only witnesses were law school professors and congressional staff. Democrats’ original claims of bribery didn’t even make it into the final articles of impeachment.

“Over and over, House Democrats have proved this is a sham process. It’s been an ever-changing narrative, dictated by primetime ratings and whatever happened to be polling well that day. For these and many other reasons, I voted against the articles of impeachment. This is one of the most serious and divisive tools Congress can use, and every other presidential impeachment had bipartisan support throughout. In this case, the only bipartisan votes have been cast against impeachment proceedings.

“Alexander Hamilton said it best in 1788, when writing Federalist No. 65: ‘In many cases it [impeachment] will connect itself with the pre-existing factions, and will enlist all their animosities, partialities, influence, and interest on one side or on the other; and in such cases there will always be the greatest danger that the decision will be regulated more by the comparative strength of parties, than by the real demonstrations of innocence or guilt.’ We should all be concerned about the damage these antics do to our Republic.

“I hope now that this vote is behind us Congress can focus on working for the people, and take up initiatives like fixing our health care, reforming forest management and lowering prescription drug costs.” - Rep. Westerman

Today is the day Alexander Hamilton warned us about. #ImpeachmentDay pic.twitter.com/QGR9Gw8yvU

“Today is a sad day for our country and the people’s House. Instead of fighting for priorities that will make a difference in the lives of American families, House Democrats have focused a majority of their agenda on this impeachment moment. It has consumed them since the hour they learned the results of the 2016 election. It’s exactly why we witnessed an inquiry driven by politics, hearsay, and a pre-determined outcome – not one rooted in fairness or facts. And, for the first time in history, impeachment is expected to move forward with a party-line vote. Although this process is likely to end in the Senate, some Democrats have already stated that it won’t stop their work to remove a duly-elected President. It’s yet another signal that the intent has always been political. I regret that these actions have further divided our nation and blocked progress on issues that contribute to the strength of Arkansas and America. I truly hope that we can move forward, remember the many things that unite us, and get back to bridging the gap on the numerous challenges facing our nation.”

This inquiry was not rooted in fairness or facts - it was driven by politics. The American people deserve better. I regret that these actions have further divided our nation and blocked progress on issues that contribute to the strength of Arkansas and America. pic.twitter.com/uDsZy9JJVt

I know that there are some Americans who disagree with the president–some on style, some on substance, and for some, both. With that said, as in any human endeavor, over the course of two centuries a terrific number of American citizens have voiced their vigorous opposition and protested many of our nation’s chief executives.

However, the power of impeachment is a solemn one. This power is vested in the legislative branch to remove the nationally elected leader of our beloved country for treason, bribery, or other high crimes and misdemeanors. This power is not to be used simply as a tool to harass a president of the opposite party. Unfortunately, history tells us that down through the years, it has.

New York Times reporter Peter Baker provides an important historical context of the many attempts to impeach past American presidents HERE. Baker documents that one out of every four occupants of the White House has faced formal accusations of high crimes and misdemeanors from lawmakers in Congress.

Today's impeachment vote in the House is the latest effort to remove President Trump from office and smear his candidacy in 2020. Before the July 25th phone call with Ukrainian President Zelensky ever took place, 103 out of 233 House Democrats had already voted to impeach President Trump for everything from criticizing NFL players to criticizing members of "the Squad."

Likewise, 17 of the 24 Democrats on the House Judiciary Committee voted for at least one of three House impeachment Resolutions brought to the floor by Texas Democrat Congressman Al Green, since President Trump was first elected to office.

In the end, House Speaker Nancy Pelosi has violated the well-stated criteria she, herself, established this past March for impeachment:

The case for impeachment that House Intelligence Committee Chairman Adam Schiff has concocted is not overwhelming and not supported by even the selected leaks and one-sided testimony.

Chairman Schiff argues that in the July 25th phone call with the Ukrainian President Zelensky, President Trump abused his power by interfering in the 2020 election and then obstructed Congress during its impeachment inquiry.

As background, I've read the public testimony, I’ve read the Schiff report, and I’ve read the Republican minority rebuttal. I've also read the “Support the Sovereignty, Integrity, Democracy and Economic Stability of Ukraine Act” signed into law in 2014 by President Obama, which ordered the Secretary of State and the Attorney General to “identify, secure, and recover assets linked to acts of corruption by Victor Yanukovych, members of his family, or other former or current officials of the government of Ukraine or their accomplices…."

I reviewed the articles of impeachment for both President Nixon and President Clinton and reviewed the Congressional process, under which both inquiries were pursued. In addition to unsubstantiated charges brought by Chairman Schiff and House Judiciary Chairman Jerry Nadler, Speaker Pelosi has presided over an unfair process.

At the conclusion of the House Judiciary Committee's debate regarding the articles of impeachment, the Congress concluded where we began in September:

1.) The House majority so disagrees with President Trump that they have convinced themselves that only impeachment is the proper punishment–despite failing the “Pelosi Test” she established in March.

2.) The following facts remain regarding the congratulatory phone call between President Trump and the recently elected Ukrainian reformer, President Zelensky, on July 25th:

I believe that reasonable people can disagree. In my view, Speaker Pelosi should have directed the House Foreign Affairs Committee to conduct vigorous oversight hearings on the Trump Administration's foreign policy towards Ukraine. This would have been the better course of action to explore partisan policy disagreements as well as those voiced by career State Department officials."

"History was made today, but not in a way Democrats had hoped. With this vote, Nancy Pelosi and her fellow impeachment crusaders have ensured the reelection of President Trump and a return of a Republican majority in the House," said Chairwoman McDaniel. "The American people have turned on this partisan sham and see Democrats in Congress for what they truly are: politicians whose sole focus is to overturn the result of the 2016 election, not on the real issues they promised to address. In 2020, voters will re-elect President Trump and choose candidates who will truly work on their behalf instead of obsessing over destroying a duly-elected President."