ALMA, Ark. (KFSM) — Alma School cafeteria workers voiced their concerns over the possibility of losing their jobs Thursday (Feb. 6) evening at a school board me... 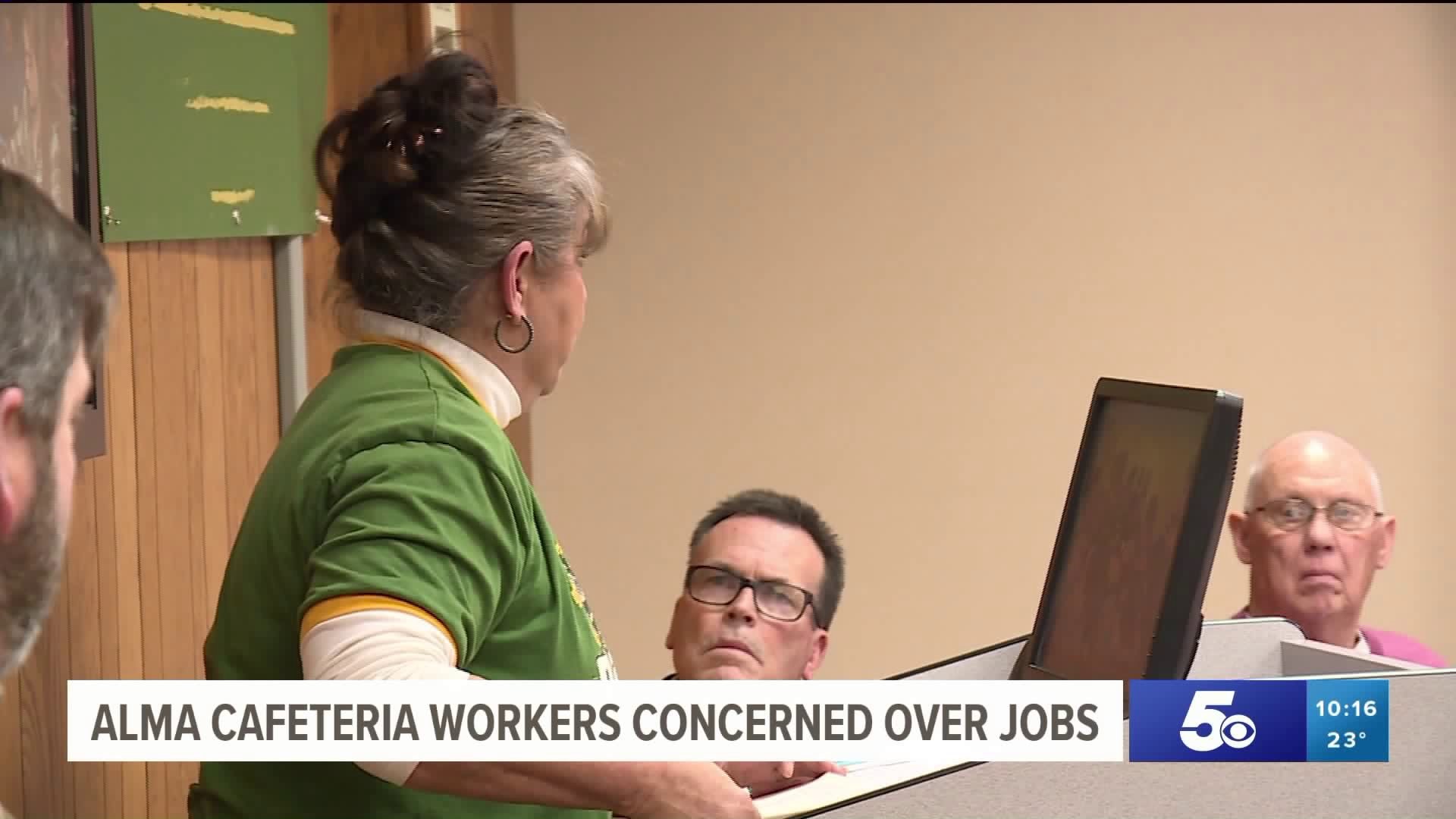 ALMA, Ark. (KFSM) — Alma School cafeteria workers voiced their concerns over the possibility of losing their jobs Thursday (Feb. 6) evening at a school board meeting.

The school board says that's not their intention, but it is looking at ways to save money.

Four women walked up to the podium during the public comment portion of tonight's Alma school board meeting. Each one spoke about their love for the school, the children and the town of Alma.

“It’s just kind of a stab in the back is what it would be, I mean you don’t want to lose what we worked so hard to have for them to take it away by giving some other company from out of state coming here and take over,” Teresa Reinwater said.

The Alma school board discussed a plan to outsource food services in the district at the meeting. The proposal came after Alma school's food service director announced her retirement.

Current cafeteria workers were present for tonight's meeting to speak about their time at Alma and the impact it had on them.

“All of our food source that we get in, the home-cooked meals we make for these kids we want to keep it like that,” said Jan Burcham.

The worry these workers have is that the food will come from out of the area, the food might become more expensive and the potential for losing their jobs to an outside company.

“For those of us who didn’t go to school and get a degree and we worked here for so many years knowing that we would have a retirement later on down the road, that could be jerked from us,” Reinwater said.

The school board discussion was not a direct plan to begin transitioning to new management, the board says it was a way to understand their options.

After reading through the proposal and listening to testimony, the board decided to temporarily suspend the process of moving forward.

“Tonight we decided that there were too many unknowns and we have some really long time cafeteria workers, some that were here when I was a student and none of them wanted it so it’s just something that at this point that we decided to table,” said Carrie Jernigan, Alma School Board President.

The school cooks say they are relieved that the board declined the decision and it makes them happy knowing they get to keep the relationships they’ve built over so many years.

“We’re just family and we don’t want to lose what we have as a family and the kids, I mean they love us. I’m Momma T at my school,” Reinwater said.

The decision to table this proposal was unanimous.

Each of the board members said they would like to proceed with looking for a replacement to the food services director before considering outsourcing.

During the meeting, Superintendent David Wooley said that no matter what happens, no one will be losing their jobs.