1 In 4 Arkansans Have Unclaimed Property. Here’s A Look In The Vault

LITTLE ROCK, Ark. (KTHV) — There is a good chance you have money or heirlooms owed to you that you do not know about. They might have been yours to begin with, ... 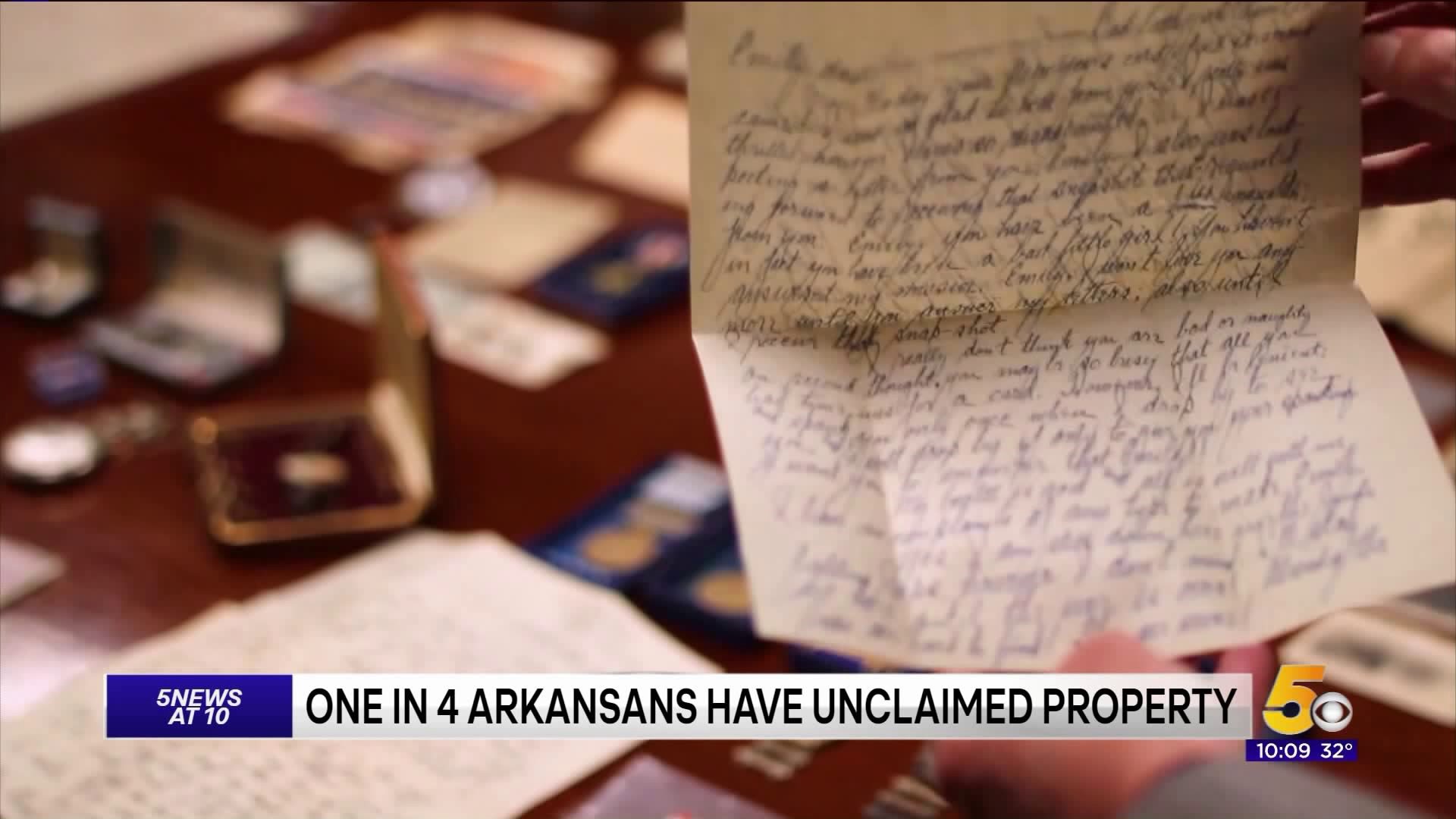 LITTLE ROCK, Ark. (KTHV) — There is a good chance you have money or heirlooms owed to you that you do not know about. They might have been yours to begin with, or they might have belonged to a grandparent, but until you ask for them, they belong to the state, and it might sell off your prized possessions soon.

“We figure about one in four Arkansans have unclaimed property,” Andrea Lea, auditor for the State of Arkansas, said. “We have north of $270 million.”

The State Auditor’s Office runs Arkansas’s unclaimed property program. Its assets come from bank accounts that had gone dormant, apartment deposits that renters forgot to pick up when they moved, and all the items from safe deposit boxes that owners stop paying for.

“What’s the number one reason why someone hasn’t paid on their safe deposit box in five years? They’ve probably passed away or they’ve moved to another state,” Lea explained. If you have a safe deposit box, please tell a family member. Put it in your will, tell your attorney. Something. I would much rather the box go to your family than get turned over to the state.”

Inside the vaults of the State Auditor’s Office in downtown Little Rock’s Victory Building are some amazing items. “I think the World War II love letters are some of my favorite,” Lea mentioned. “They were beautiful letters, written from 1942, written from a Marine to his girlfriend back here in Arkansas. And she kept the letters in a vault. Unfortunately, we have not been able to find her or a family member. But the letters are just really sweet. Just, really sweet.”

The vaults contain pieces of vintage jewelry, autographed baseballs, and a record with a greeting sent home during the Second World War, among other items. They also, however, contain human teeth, Gumby dolls, and other unusual keepsakes.

“We had a body in there,” Lea recalled. “The cremains of… someone’s ashes. And we found the owners. The man was not married and did not have children, and so we found a niece and a nephew, and neither of them wanted to claim. And we can’t force them to claim it.”

Lea said the state ended up giving the remains to the Arkansas State Crime Lab for proper interment.

The auditor’s office will try to track you down if its staff can figure out who you are. They search public records and social media to find next of kin and send letters and emails and make phone calls to anyone they can find. But anyone can comb the state’s unclaimed property database by going to ClaimItAR.com. When you type in your name and city, the site will show any money or property that might belong to you.

Lea also suggested that users check for their friends and relatives and encourage them to claim any property that might be in their names.

“The good part is: we’ve worked hard to make the claim process as easy as possible,” she added. “If it goes through, it’ll be 2-3 minutes, and you’re going to have the check in 7 to 10 days.”

Lea said some of the items have been in the state’s custody for years. She believes her staff has done all it can to find their rightful owners, but she is running out of room and running out of time. So, for the first time since she was first elected in 2014, she is planning to hold a public auction in 2020.

“That’s what scares me in doing the auction,” she stated, “is who knows where it will go? It won’t go to the family member. It’s killing me. It’s killing me, but I have to be practical at this point.”

State law allows for auctions of unclaimed property once a year. Lea said that many elected officials from other states are surprised she has gone so long without holding one.

“One of the reasons I haven’t had an auction in my term as auditor, at this point,” she explained, “is: I really want to find the owners. A ring may be determined the value by the gold in it, or by the stone in it, but we can’t determine the sentimental value. And so, I want to get it to the family.”

Lea backs that up by telling the story of a woman who claimed money left to her by her grandmother. The woman did not know her grandmother had created that account for her, and it contained several thousand dollars. The woman said the money was incredibly helpful because she was trying to go back to school to become a teacher and was struggling to afford tuition.

But Lea also has stories of people who think they cannot fill out the form, and instead of bringing home cash or a piece of family history, they leave it in that vault in the Victory Building. “And all it takes is a call to us and we’ll get them past that bump in the road,” she added. “We really want to get you your unclaimed property.”

You can also go to MissingMoney.com to search databases of other states.