We had all the questions about the Standley Lake eagle drama, and the answers don't disappoint 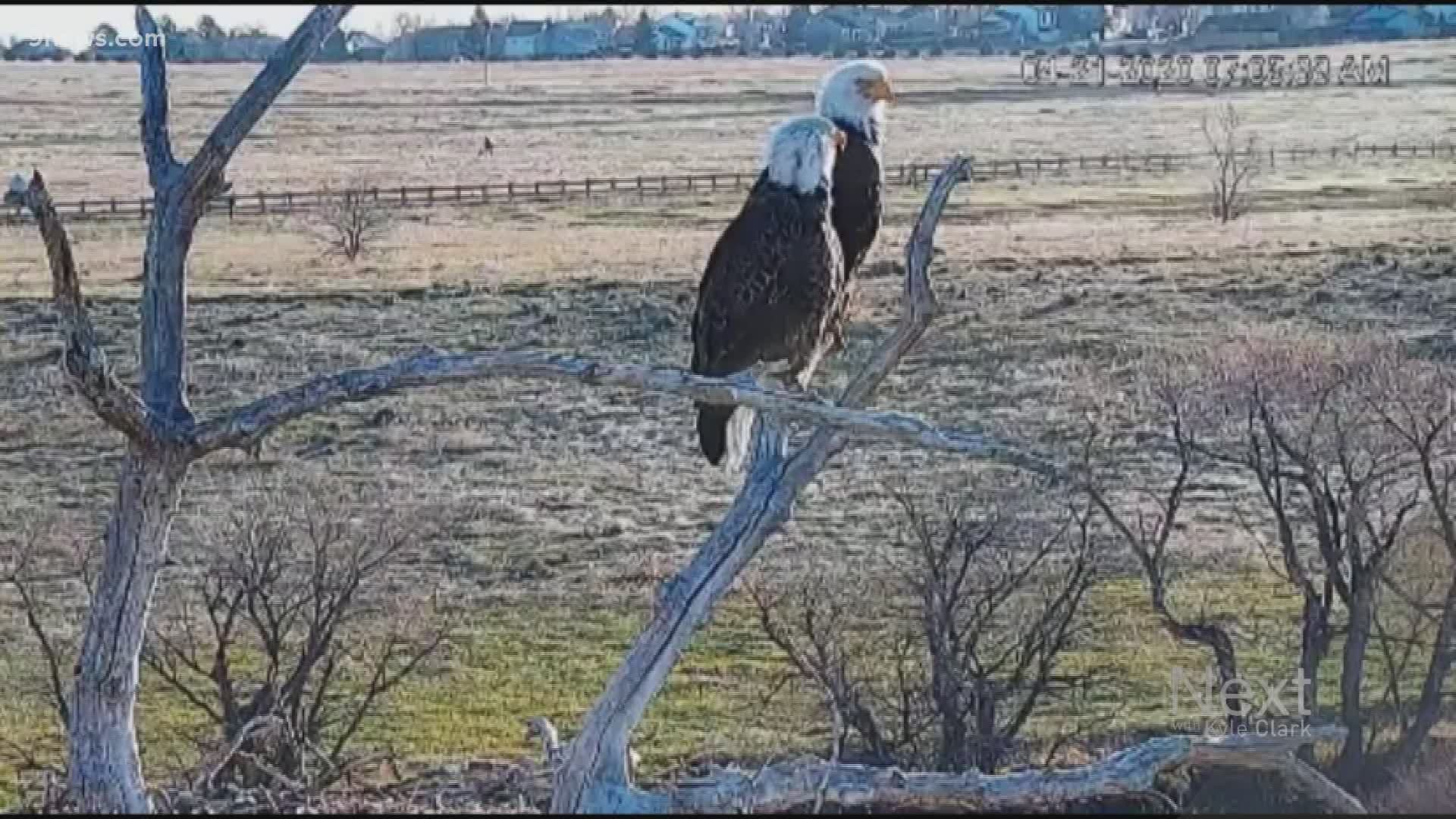 WESTMINSTER, Colo. — After an April filled with an attempted murder, a missing mother and a hot and heavy new romance, the beginning of May has been comparatively quiet at the Standley Lake eagle’s nest.

But it’s also a time to reflect on all of the drama that we’ve seen transpire on the regional park’s Facebook page and live eagle camera. So, it seemed like as good of time as any to get expert analysis on the ongoing situation.

Luckily, Lexie Martinez, a park naturalist at Standley Lake Regional Park and Wildlife Refuge and the American hero who updates the Facebook page, was wiling to chat with us about this ongoing eagle situation.

RELATED: The drama at the Standley Lake eagle's nest is as crazy as anything you'll see on Netflix

RELATED: Father eagle attempts to mate with female who drove away his former partner

Some of the questions and responses have been edited for clarity and length ... mainly because the interviewer was way too excited to ask eagle questions.

A reminder: the Standley Lake eagles nest is livestreamed. You can watch that here.

9NEWS: Do you think more people are more invested in the eagle cam than usual because of the stay-at-home orders?

Martinez: Oh yeah, we definitely have had huge influx of viewers. Also there are a lot of other live eagle cams around the country, and a couple of those nests failed in similar ways to what we’re experiencing … and there’s one nest where the eggs got eaten by a crow.

We were hoping for a happier ending than that … and then we got all the drama in April.

9NEWS: Give us a recap of what was happening in April.

Martinez: So just over a month ago, we had an intruder eagle, we’re calling her F420 – F is for female, 4 is for the month of April, and 20 is for the year – and she came in and attacked the nest.

So after that, we haven’t seen the mom eagle … that we know of. And F420 has sort of played house with dad, and has been sort of making herself at home. And they’ve been nest-building a lot, and they’ve been copulating quite a bit on camera.

9NEWS: Have you seen “The Truman Show?” Are you ever worried that if the eagles knew we were watching them copulate on camera they’d like … be embarrassed?

Martinez: I guess if you’re an eagle you wouldn’t like everything on blast, but it’s nice for us as wildlife researchers. It’s a really nice insight into eagle behavior. Seeing this situation, it’s not necessarily uncommon, but it’s surprising all of the events that have unfolded in the past few weeks.

So it’s nice to have that camera and see it, but I think if I were a bald eagle, I’d want to keep some things private.

9NEWS: One of our anchors referred to F420 as a “nest wrecker.” Do you agree with that characterization?

But the reality of the situation is we don’t know where she came from or why, so the position that our mom eagle is now in is the same position F420 was in, originally. She needs a new territory, she needs a new mate, she needs to reproduce, she’s going to do whatever it takes to get that, and that’s what F420 did.

9NEWS: OK let’s talk about dad … do you think he moved on too fast? Typical man, am I right?

So, in some pairs, while the male is out hunting, the female will mate with another male and force her partner to raise the babies. So there are a lot of cases where the females can’t be true to the relationship either.

9NEWS: Are you watching this as intently as many of us are?

Martinez: I was anticipating watching the camera a lot more because there were going to be eaglets and providing updates to the public about that. I didn’t anticipate having to watch so closely all the time.

The past few weeks, all this activity was happening in the late evening. I was glued to the computer when I got off work.

9NEWS: Things seemed to have calmed down on the nest. It’s almost a waiting game.

Martinez: I slowed down on the updates. There’s not a whole lot to report right now. The main behaviors that we’re seeing are that F420 has really made herself at home, so building, work on the nest, working on those home renovations, that’s been a bonding behavior.

So, they’ve been establishing a home together. They’ve been doing that quite a bit, they’ve been copulating quite a bit. We’re really wary that she can’t lay eggs at this time, just because it’s so late and watching them grow up in the sweltering heat in the summer without any shade could be hard to watch.

But after talking to wildlife biologists, it’s likely a pair-bonding behavior that’s not going to result in eggs. So we hope.

9NEWS: Real talk: Do you think dad and F420 are going to stay together?

Martinez: A lot of things have taken us by surprise in this situation, and that’s one of the things that’s up in the air. So bald eagles, we often say they mate for life, but they’re monogamish I like to say. They’re still wild creatures, we’re not sure if they’re going to continue this relationship next year.

Based on their behavior right now, it seems like they might be a bonded pair moving forward.

9NEWS: What happens if mom comes back to get her man?

Martinez: There are a couple options. I mean there are certain situations – very uncommon – where there’s coparenting with a third eagle, that could be a possibility. Given how much she fought off F420, I could imagine that’s highly unlikely.

Another option could be fighting F420 again, and that’s going to be a battle to the death … or until one of them chooses to leave. We haven’t seen her. We’re not sure if she’s going to come back at this point. It’s just been over a month.

9NEWS: Do you think mom is still alive?

Martinez: We don’t have any indication that she’s dead. We searched the area a few times after the initial fight, and we were told by Colorado Parks and Wildlife to stay out, it’s a super sensitive time, especially because dad was still incubating the eggs.

But if there was a bald eagle body that was found, we would know about it.

9NEWS: What misconceptions do you think people have about this situation?

I think it’s a big misconception that even though we’re familiar with them, they’re still wild creatures. That’s why we don’t name them. When we start naming wildfire people start erasing boundaries and get confused with what’s a wild animal and what’s a pet.

9NEWS: What fascinates you the most about this situation?

Martinez: One thing that I really love, it was really bittersweet to watch, but as soon as mom left, dad took on the parenting responsibilities, dad took them very seriously. And they do balance their parenting responsibilities, mom is not always responsible for incubating the eggs and raising the young, but he took it so seriously and she was gone for days and he was incubating the eggs. And he did his best to raise that eaglet, but there was a series of events that led to that eaglet passing away, one of them being a snowstorm.

The other thing I find really fascinating is how quickly he moved on. That’s probably the most surprising to me … after speaking to a lot of biologists they say this is a normal timeline for him to move on and choose F420 as a new mate, but I thought that was pretty surprising still.

Martinez: Two weeks! It’s really sad, but it’s really a matter of survival and a lot of this is instinct based and that ties back into people associating human feelings with these wild animals, and we’re heartbroken but their instinct is to survive and procreate and sometimes that’s hard for us to rationalize because we’re so invested in it.

Martinez: It’s just a waiting game. Will F420 lay eggs? We’re not sure. It hasn’t happened yet … we’re leaning toward she likely won’t, and yeah all the other hypotheticals, it’s just sort of a waiting game. We’ll have to wait and see what happens