Since 2008, more than 8,600 Saint Louis Zoo-raised endangered hellbenders have been reintroduced to the wild in Missouri. 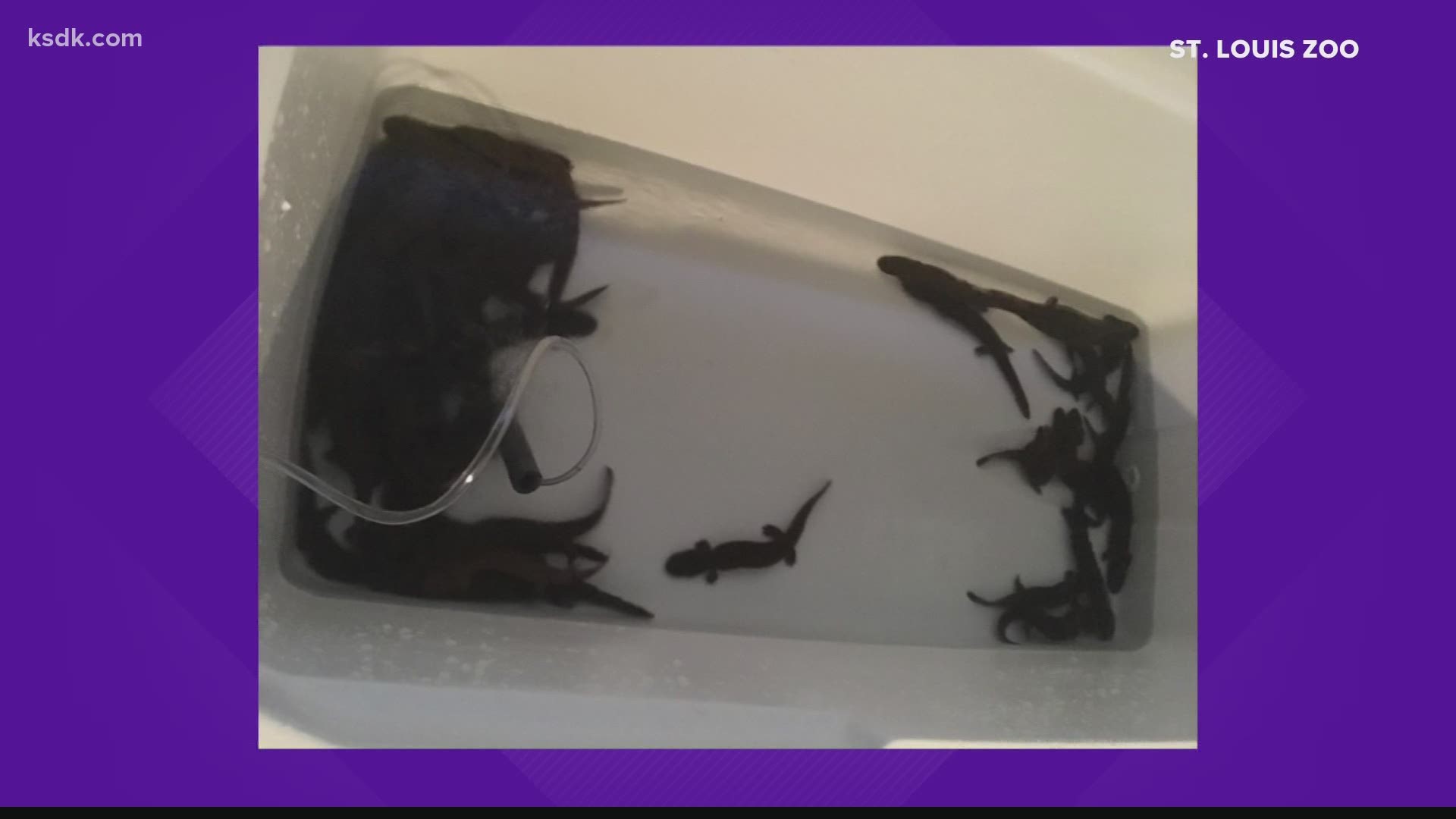 OZARK, Mo. — More than 1,000 Ozark and eastern hellbenders raised from eggs at the Saint Louis Zoo were released back into their native rivers this summer by the Missouri Department of Conservation.

Since 2008, more than 8,600 Saint Louis Zoo-raised endangered hellbenders have been reintroduced to the wild in Missouri, according to a press release.

The reintroductions this summer almost didn’t happen because of the COVID-19 pandemic. The team of scientists from MDC and the zoo made a detailed plan that focused on the safety of team members while providing the best care for the hellbenders.

The restoration team’s priority was to reduce contact and maintain social distancing. To achieve this, animal transfers from the zoo staff to the state herpetologist happened in open parking lots. Crews releasing the hellbenders were also reduced and limited to two individuals per boat.

“The extraordinary teamwork by the Zoo's Herpetology, Registrar, Life Support Systems and Animal Health departments to prepare the hellbenders for reintroduction is a testament to the dedication of Zoo staff to this conservation program," said Lauren Augustine, Curator of Herpetology at the Zoo and Director of the Saint Louis Zoo WildCare Institute Ron Goellner Center for Hellbender Conservation. "Despite a pandemic, we strived for a conservation ‘win’ for these animals."

The world’s first successful zoo breeding of Ozark hellbenders happened at the zoo in 2011. In 2018, another achievement took place at the zoo with the hatching of second-generation zoo-bred hellbenders, the release stated.

The zoo has had 5,531 successful hellbender hatchlings so far.

“This fall, despite the extra challenge, we will continue to work toward keeping sustainable populations through breeding selected individual hellbenders at the Zoo and head-starting wild-collected eggs from MDC for future releases,” said Augustine.

The zoo has been head-starting juvenile Ozark and eastern hellbenders, hatched from eggs that were collected in the wild, for future release. The zoo currently has 1,397 hellbenders.

Once the hellbenders are 2 to 8 years old, they can be released into their natural habitat, which is the Ozark aquatic ecosystem. MDC biologists continue to monitor the success of the released animals in the wild, the release said.

Hellbenders are the largest aquatic salamanders in North America. Missouri is the only state that has both subspecies: the Ozark hellbender and the eastern hellbender.

Both are listed as endangered in Missouri and the Ozark is also federally endangered by the U.S. Fish and Wildlife Service.

Zoo breeding and head-starting were deemed essential to the long-term recovery of hellbenders in the state.